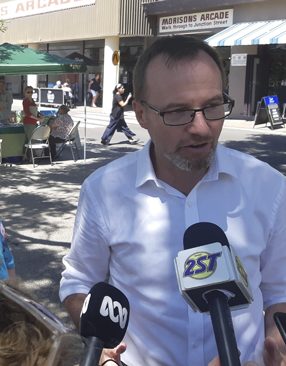 Finding answers to inequality should be front & centre of mind, especially around election time. According to ACOSS Australia is amongst the most unequal wealthy nations in the world. In spite of 27 years of uninterrupted growth and near full employment for much of that time, inequality has steadily become worse. “We should not accept increased inequality as an inevitable by-product of growth,” says Sandra Goldie.

Finding solutions without breaking the bank could redefine society as we know it. Popular among some quarters is the idea of a universal basic income (UBI). An alternative might be the provision of universal basic services (UBS), which might be defined as expanding the services currently provided by the state.

Recently, David Shoebridge was in Nowra, to announce the former – a Green’s proposal for a trial universal basic income. The idea of a UBI is that a flat cash benefit be paid to everyone, regardless of wealth or need. Limited trials are currently in progress in a number of overseas countries, including: Finland, Ontario Canada, Scotland & India.

The local scheme being proposed by the Greens is based on South Nowra with an estimated 800 recipients being provided with a basic income of $18,000 per annum. The payment would be available to all adults, regardless of employment status. The trial would be conducted for a three year period with an estimated costing of 55 million including on-costs.

In some ways it is a surprise that the concept of a UBI has come so strongly from the left side of politics when some might argue that it would be another form of middle class welfare. Whilst it might fit more robustly with free market economics than UBS alternatives, it does offer recipients a greater degree of free choice. However, as modelling does show UBI comes at a significant cost & it would require significant tax increases, if it was to extend beyond local trials. Predictably, the right side of politics has condemned it outright with Eric Abetz labelling it: ‘economic lunacy’.

The biggest concern of any form of UBI is that it could be used by neo-liberals to argue for further cuts to existing public services, such as, medicare and education.

With the arrival of free market thinking in the Thatcher/Reagan years came the unmitigated attack on ‘inefficient’ welfare states. Its advocates called for and still call for the dismantling of practically every service that once was the prerogative of governments. Here in Australia we have seen the dire consequences of much what has been done. Public education and medicare have survived, if only just, and continue to be at the cutting edge of public analysis and debate.

For those who believe in public provision of basic services, opportunity exists to reconsider our options in the light of the changes that neo-liberal thinking has wrought on us all. Both medicare and public education remain the mainstays of our welfare system, along with direct payment benefits, such as, pensions, new start allowance, parenting payments, rental assistance, etc. They constitute the universally accepted ‘public safety net’ that politicians are so fond of reminding us, make us such a ‘fair’ society.

Inequality today affects ordinary folk in many ways. Among the hardest hit are those without employment or who find themselves underemployed through no choice of their own. It is estimated that there is only enough work in Australia to keep just half of us in full time work with 16 job-seekers for every job. Those on lower incomes struggle to meet rising costs of what are essential needs, vis-vis: food, shelter, transport, information services and increasingly, electricity charges.

The buzz word amongst economist has always been ‘productivity’. In a sense we all understand this. It is a measure of the efficiency of a person, machine, factory, system, etc., in converting inputs into useful outputs. We are a rich country, which means overall we are a highly productive nation. To raise productivity further is the stated aim of most governments. The current political debate on real wages growth or the lack of it, is directly related to productivity. As it stands productivity in Australia has stalled, and in fact in the last quarter was in decline. There is an economic argument that by keeping wages low, you are not helping productivity to grow, but that is not for discussion here. What this article is about is finding solutions to inequality, which could largely be overcome by providing guaranteed work for all.

As already outlined improving productivity in Australia is a problem and part of the reason is that underemployment in Australia is quite high. Let us imagine that as part of the solution, we introduced a universal guarantee of employment. A fine idea, some may say but how would it work?

Well to begin with we might offer say three days work a week to those without jobs or those seriously under-employed. The scheme would be voluntary and pay rates would be based on the minimum wage or at award rates, where the work was being undertaken by appropriately qualified people.

As a society we make choices. Finding sufficient work of a useful nature for a small proportion of our population is surely not beyond us. The key to the proposal is that the work is useful and beneficial to both the community and the participants. A top down administrative approach would fail. What is required is local administration with significant community input and engagement.

Appropriate checks and balances would be necessary to ensure good governance, work place safety requirements, as well as compliance with environmental & planning ordinances, as set by higher levels of government.

Variants of government sponsored work have occurred in the past. It usually comes at times of high unemployment. Its critics can point to high administrative costs and substantial ancillary outlays, especially when the work being offered requires additional investment in materials, plant and equipment. Balanced against this are the benefits that flow to the community in a myriad of practical and social ways including indirect savings by meeting some of the challenges associated with such scourges as, rising levels of mental health or incarceration rates, as we see in Australia today.

To take the example of public transport further, guaranteed work could create not only jobs in this sector but go along way to alleviate poverty, whilst reducing congestion. For the low paid particularly in regional Australia the need to own a private car is an imperative. However for many of those on low incomes, it is unaffordable, not to mention the fact that when you include children, most people do not even have a driver’s licence. Governments already subsidises public transport hugely, but part of the problem for it not working adequately, is that there is simply not enough of it to make a reliable public benefit. This is not the case for many well-off people, who live in inner city areas where public transport is available, so many of them find they have no need for a car at all.

Currently, neither of the major political parties are promising an increase in unemployment benefits. Labor has said it will undertake a review. The current benefit stands at $550 a fortnight for a single adult. If this payment was to be supplemented by three days of paid work, even at the minimum wage, it would lift unemployed incomes by $1135.80 (incl. casual loading) per fortnight. A comparison with the current government’s punitive ‘Work for the Dole’ scheme, see participants compulsory required to work for 25 hours a week for a six month period for an additional miserly benefit of $20.50 a fortnight, which would hardly account for a participants travel costs.

Matching a guaranteed work scheme with suitable infrastructure support would not come cheaply. However, to return to the economist ‘productivity’ argument, financing this kind of investment would raise productivity to such a level that it becomes affordable. Government borrowings when matched by productivity gains make for sound economics and should not be the cause of undue scaremongering that the public usually expects when a bold government undertakes public good.