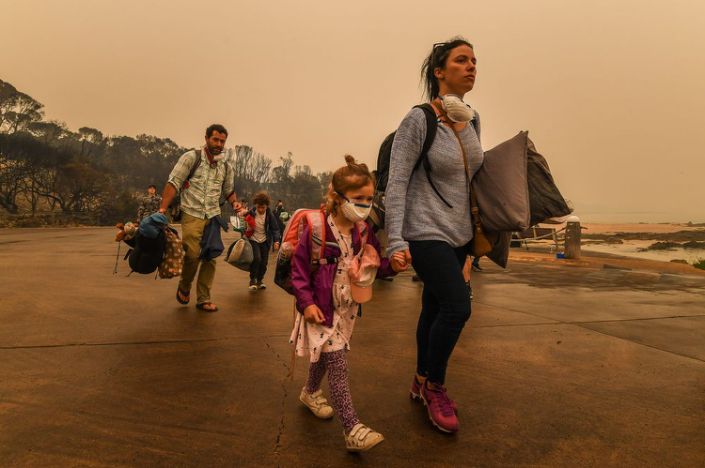 Shocking evidence has revealed how families were left underprepared to deal with evacuations of their young children during the devastating Black Summer bushfires. Now a special project is surveying those affected to come up with new guidelines to help protect the young and vulnerable in these disaster situations in the future.

On the last day of Winter, over 40 members of community, government and emergency organisations, as well as health professionals and volunteers, converged in Moruya on the South Coast of NSW, for the launch of the Australian Breastfeeding Association's (ABA) Community Protection for Infants and Young Children in Bushfire Emergencies Project.

Aware that many families had experienced great difficulties evacuating with their babies and young children, ABA were motivated to ensure Australia will be better prepared for future disasters when it comes to protecting infants and young children. This project, funded by the Australian Government, is the first of its kind in Australia.

“Each and every one of us can remember where we were when those fires hit,” reflected Walbunga and Monero-Ngarigo Elder, Iris Walker White, during her Welcome to Country.

“I live just on the western side of Moruya,” she continued. “The night before, I spoke to my son, who was the captain of the Broulee brigade. He said “Mum, can you have the children? We know the fires are going to hit in the early hours of the morning”. At 4am on New Year's Eve, my grandkids were dropped off. My house filled very quickly that morning, as extended members of our family, who also worked for the RFS as volunteers… We had seventeen people, in addition, to my husband and I.”

While emergency preparedness is heavily invested in across Australia, until now, children have been largely overlooked. A 2013 report by Save the Children warned that children had been subjected to 'benign neglect’ in disaster preparation. It concluded that ‘there is no standard practice with regard to planning for the unique needs of children’ in emergencies. When it comes to the very youngest, a 2019 audit of Australian emergencies plans identified a ‘dearth of planning at all levels of government for the needs of infants and young children’.

Over the Black Summer, lack of planning adversely impacted families with young children. Lack of advice on resources needed to evacuate with a baby was noted as being in stark comparison to guidance on how to evacuate with a pet. Poor evacuation centre facilities resulted in caregivers who were bottle feeding needing to wash bottles in toilet sinks, and some families left centres because of concerns about child safety with animals there. The young children of Mallacoota in Victoria were the last to be evacuated from the choking smoke because they could not climb Navy ship ladders.

Amongst the regions worst impacted over the Black Summer was NSW’s Eurobodalla Shire, where the project has strong local support.

Senior manager of breastfeeding information and research, Ms Hull, explains how the project will work saying,“the ABA will work with the community to apply the knowledge gained from the national research to develop emergency responder training, to support the needs of babies and young children. Eurobodalla will become a model for local governments and community organisations across Australia to ensure that the children of the future are protected in disasters.”

ABA project leader, Dr Karleen Gribble, addressed the attendees over lunch, providing some background to the project. “After the fires, about 40 emergency, health, women's and children organisations signed a call to action, asking the Australian government to take some steps to developing more comprehensive planning for young children in Australian disasters. But one of the major issues is that there is no evidence base for that planning. That is what we are about to change.”

The research component of the project, the Babies and Young Children in the Black Summer (BiBS) Study, undertaken in collaboration with Western Sydney University will capture the experiences of families with children 0 to 4 years across Australia during the Black Summer Bushfires of 2019-20 via an online survey as well as interviews.

The project received funding from the Australian Government under the Preparing Australian Communities grant program and is the first of its kind in Australia and only the second worldwide. Ms Naomi Hull, senior manager, breastfeeding information and research, Australian Breastfeeding Association, applauded the Australian Government for recognising the urgent need for planning for infants and young children in emergencies, via the Community Protection for Infants and Young Children in Bushfire Emergencies Project.

“This landmark funding will provide a strong evidence-led base for ABA to develop emergency response training for the protection of babies and young children, in and around natural emergencies. They are society's most vulnerable and are the horror experiences of the Black Summer Bushfires, where babies were the last to be evacuated from Mallacoota. It is vital that future emergency planning prioritises solutions for their most basic human needs,” Ms Hull said.

Federal Member for Gilmore, Fiona Phillips, attended the launch, reflecting how this project will provide “valuable insight to help better protect infants and young children in emergencies locally and right across Australia”.

Elder Iris highlighted the importance of this project from an Indigenous perspective. “I think it is really important to have some informed research and that we learn those lessons. We are handed on stories to tell of our Country, of this Place. And the purpose of those stories, is that we don’t forget the past, and that we put in place processes for the future.”

The BIBS Study is currently open to anyone who planned to evacuate or evacuated during the 2019/20 Bushfires across Australia with an infant or young child aged 0 to 4. It is also open to anyone who supported a family or caregiver with a child aged 0 to 4 as a community member, volunteer or in a professional role. The survey can be accessed here.  The information gained will help the next stage of this project - putting the lessons learnt into practice.

Local GP, and ABA’s Eurobodalla Group Leader, Dr Michelle Hamrosi, is delighted that families and community organisations in Eurobodalla Shire will be the first to implement comprehensive planning for young children in natural disasters and that their experience will assist other communities.

“The summer of 2019-20 was terribly difficult for so many families in Eurobodalla. Involvement in the project will bring something positive from that experience. Looking to the future, our children and families will be better protected if another bushfire comes, and so will families across Australia.”

Be a part of the community helping to protect infants and young children. After all they are our future.