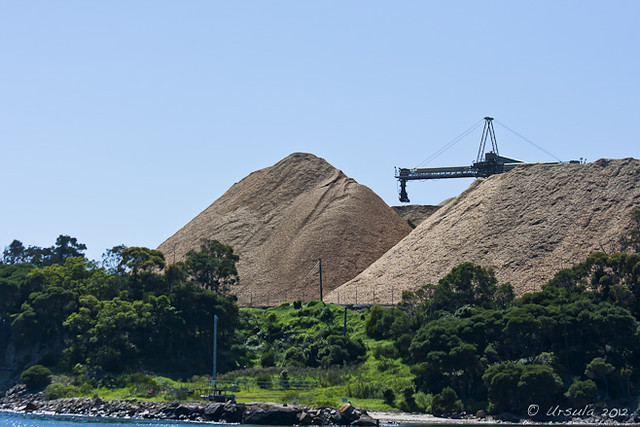 Local conservationists are outraged that the Eden chip mill owners are set to buy the national timber business of Boral Limited.

South East Region Conservation Alliance (SERCA) have raised the alarm fearing that Allied Natural Wood Enterprises (ANWE) will become a near monopoly buyer of every tree cut down in every State Forest of the South Coast, apart from some firewood and a tiny amount of quota sawlogs.

ANWE is reported to have paid $64.5 million for the Boral timber interests.

ANWE already has a monopoly on all trees cut down in the Eden Region, since taking the Wood Supply Agreement for sawlogs from the Blue Ridge sawmill recently. If the sale of the Boral timber business goes ahead, ANWE will own almost all the other South Coast sawmills which currently receive trees from the Forestry Corporation.

“This is not in the public interest and should not be allowed by the Government,” SERCA deputy convener Harriett Swift said. “As almost the only customer for State Forest logs, this will place ANWE in a strong bargaining position, where it can almost name its own price. It will entrench taxpayer subsidies for native forest logging.”

“ANWE has not lodged an Annual Financial statement to the Australian Securities and Investments Commission (ASIC) for the past two financial years, so we have no idea of the current state of its finances,” Mr Burke said. “However, over the past 18 months ANWE has received many millions of dollars from the NSW and Federal Governments under bushfire recovery and other funding.”

In 1968 when the National Parks and Wildlife Service was established the vast majority of South coast crown land forest was classified for Forestry opening the way for logging export operations. In December 1970 the first boatload of woodchips left Eden for Japan.

While our forests that survive logging and bushfires, and areas of national parks in protection zones, may look abundant and thriving, most are mere shadows of their former selves. Forest only makes up five per cent of Australia’s hot arid climate, and very little of what remains has not been affected by previous logging or the Black Summer wildfires.

Local forestry activists have been monitoring logging operations to ensure post-bushfire conditions are not breached and have been shocked at the level of non-compliance with the EPA issuing stop work orders in South Brooman and Mogo last year. Eminent ecologist David Lindenmayer warns that logging bushfire affected forest will set wildlife recovery back by up to 200 years. Forests remain a vital natural asset in absorbing carbon and producing oxygen to combat the climate and ecological emergency we currently face. It is also important to acknowledge the role forests play in generating rain and moisture.

Sustainable alternatives to hardwoods are already favoured by the building and construction industry. A subsidised export woodchip industry seems ludicrous when old growth forest is such a valuable resource. Sustainable methods of plantation logging already exist to support industries reliant on wood resources.

You can keep up to date with forestry issues on the South Coast by visiting the SERCA webpage or Facebook page. Extinction Rebellion Bega Valley also organises forest actions and holds politicians to account.