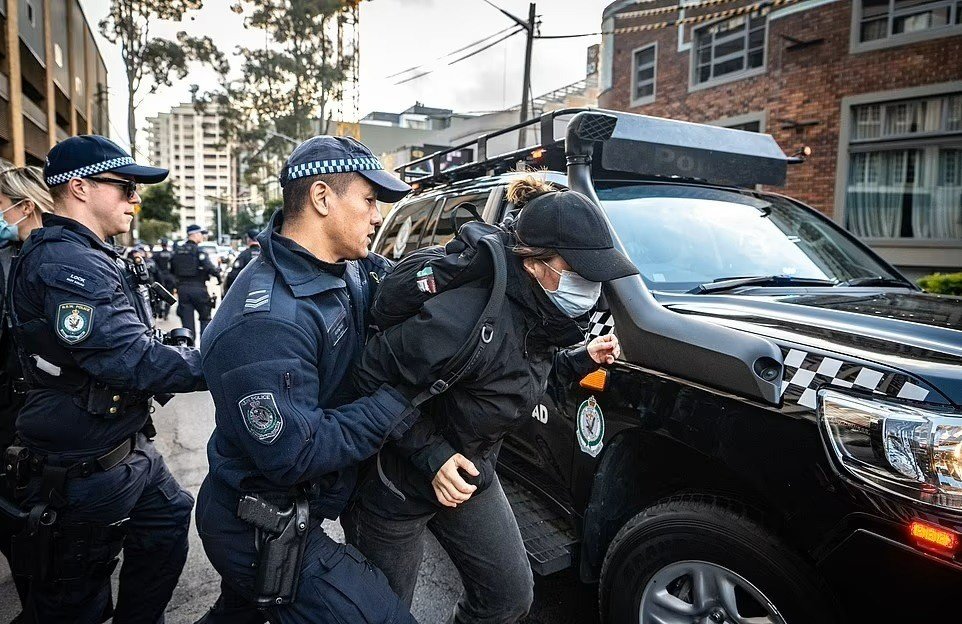 In NSW a special task force, Strike Force Guard III, has been established to target environmental groups in a concerted state attempt to silence anyone they view as a threat to the prevailing fossil-fuel driven political order. Conditions imposed on activists are now more severe than those meted out to some perpetrators of domestic violence or members of bikie gangs.

In 2014, a friend of mine was involved in making a comedy video about a recently passed law in Victoria that empowered police to break up peaceful protests with near-total impunity. At the time, I laughed, shook my head, and moved on – not great news, of course, but hey, I lived in NSW, and I’d never even considered going to a protest.

Fast forward eight years, and I am now a fulltime climate activist, fighting to halt the climate and ecological emergency before it destroys our civilisation. As the world continues to warm, and action continues to be insufficient, the piecemeal introduction of repressive anti-protest laws around the country is now bearing poisonous fruit.

In just the last few weeks, for instance, we’ve heard report after report of activists being visited by police at their homes, stopped on roads, having cars searched, receiving intimidating phone calls, given disinformation about their rights and in one case being taken into custody – all because police, seemingly without evidence, suspected these people of considering attending a protest.

These police actions occurred in the lead-up to the International Mining and Resources Conference (IMARC), held last week in Sydney, and were clearly aimed at discouraging participation in protests of the event. The annual conference has, in years past, been the site of lively peaceful protests – as well as police violence.

However, according to activists who have collated the experiences of the 39 people recently targeted, virtually none of the people visited by police were involved in any planned protests at this year’s IMARC. Several of these people have no history with police at all. It seems they were placed on an opaque ‘person-of-interest’ list purely because of their past involvement in climate protests, or because they have expressed views supporting serious climate action.

These acts of digital surveillance, harassment and repression come in the context of escalating crackdowns on environmental protest around Australia. In Victoria, in addition to the laws introduced in 2014, the State Parliament this year legislated penalties of $22,000 and/or 12 months’ imprisonment for engaging in anti-logging protests. The Tasmanian Parliament passed similar legislation a few weeks later.

In NSW, in response to recent non-violent protest campaigns by Blockade Australia and Fireproof Australia, laws were passed imposing similarly large fines and 2-year jail terms on individuals protesting on bridges and roads, and a special task force, Strike Force Guard III, was established to target these groups.

Since then, activists have faced high-level police attempts to obstruct their activities, including a controversial raid on a property in Colo NSW where Blockade Australia was preparing a campaign. The same task force is responsible for the IMARC-related harassment, which speaks to a concerted state attempt to silence anyone they view as a threat to the prevailing fossil-fuel driven political order.

The new laws have been deployed by the task force to arrest anyone even peripherally involved with these groups, specifically to hinder their ability to organise. The laws do this not by imposing harsh sentences (yet), but by using the perceived seriousness of the offences to impose extreme bail conditions that make it impossible to organise, under threat of immediate imprisonment if they are breached. Several of the activists targeted in the lead up to IMARC had already had such bail conditions imposed on them.

These bail conditions include blanket non-association orders with anyone else associated with the groups; bans on entering the Sydney CBD, and/or the entire state of NSW; curfews and/or 24-hour house arrest; bans on having more than one mobile phone or having encrypted messaging apps installed on phones; and requirements to surrender devices to police upon request at any time, among others.

Harsh bail conditions and unwarranted harassment do not only hinder climate activist groups from organising, but affect the health, wellbeing and livelihoods of the ordinary people taking a stand for the future of life on this planet.

A number of those persecuted by police suffer from mental illness, physical disability or are in otherwise vulnerable positions. Activists have been kept apart from lovers, family members and employment by the restrictions. Nonetheless, police have seen fit to continue the harassment and intimidation of those already labouring under these extreme conditions.

It is a common refrain in climate activist circles that the Australian state is captured by fossil fuel interests. This can sound like conspiracy theory, but in observing the way various state institutions, from the police and magistrate’s courts, all the way to state legislatures and premiers of both major parties, have united to criminalise environmental activism and prevent peaceful disruption to fossil fuel operations, this charge is increasingly difficult to deny.

Each new act of political repression ought to be an alarm bell in the minds of all Australians that our cherished rights to freedom of expression and assembly are being severely undermined. The demonstrated and increasing tendency of state institutions to silence dissent and repress advocates for change should terrify anyone who cares about political expression.

It is not enough to shake our heads and mutter that someone should do something. If we truly value our democracy, then these intimidating, repressive acts are not just an attack on radical climate activists, they are an attack on all of us – and in a rapidly destabilising world, it falls to all of us to defend our rights before they’re gone for good.

Mark Conroy is a musician, producer and educator who now volunteers full-time as a climate activist with Extinction Rebellion.