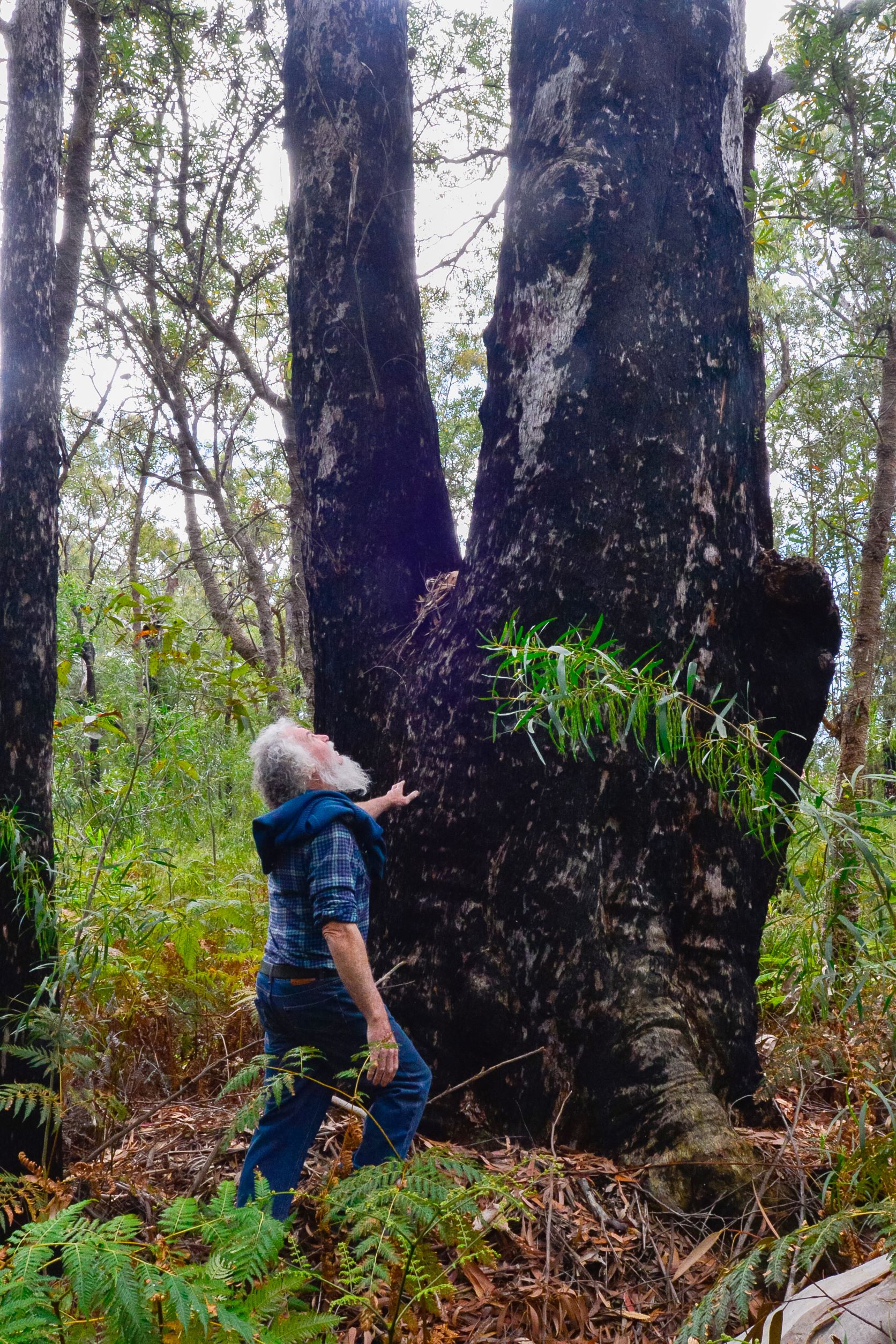 The Passing of a Matriarch

This is the story of the felling of a forest giant in our neighbourhood at Woollamia. I estimate this tree was 50 metres tall with a girth (diameter at breast height) of well over two metres. It was our matriarch tree.

In the year 2000, after tree felling commenced at the nearby Big Hole, two neighbours and I tried, but could not reach around the base of this tree. So the circumference back then was over six metres.

A stately and beautiful blackbutt tree, (Eucalyptus pilularis) estimated to be 275 years old. If so, this forest matriarch was 'a portal in time', alive before the arrival of Captain Cook, a time when our lands were carefully and sustainably stewarded by First Nations People who occupied the area, evidenced by nearby middens.

What was the reason for this wanton destruction? A Development Application (DA) was lodged with Shoalhaven City Council (SCC) in 1996, resulting in the granting of a conditional subdivision along the northern side of Edendale Street and subject to rules applying at that time. This is the applicable situation today with our current planning legislation. We were told numerous times by SCC staff that if such a DA were lodged today, it would fail on environmental grounds because the current legislation does not apply.

A demonstration by a group of local citizens against the clearing of the forest and the development was filmed and screened on Win News on Monday September 19th.

Our matriarch tree provided high rise habitat and we regularly heard sulphur-crested cockatoos returning to their roosting tree late in the day, sometimes in larger groups of a dozen or more birds. It had a second trunk which branched off on the northern side near the base.

Blackbutts have the habit of shedding branches and limbs as they grow, (giving rise to the forestry term ‘widow makers’), resulting in the formation of larger nesting hollows. Trees with hollows and the animals that depend on them are disappearing from our coastal landscape.

Hollows of a medium size suitable for animals such as parrots will take around two hundred years to form and the larger and deeper hollows occupied by glossy black cockatoos (Calyptorhyncus lathami) and other large animals such as masked owls (Tyto novaehollandiae) can take a lot longer.

As I write the earth shakes, the ground vibrates, the house shudders with the sound and weight of a giant machine and its constant beeping ringing out. This dreaded sound signals the death of many trees in our neighbourhood.

The first stage of the destruction commenced on September 5th when a D4 bulldozer began to clear the small trees and understorey. Two days later a large excavator on tracks arrived to remove the larger trees.

This machine moved around the tree base ripping the supporting roots and then pushing over the trees. In this methodical way, the ‘tree services’ contractor destroyed hundreds of trees for the development of a subdivision.

One large blackbutt tree had three brush-tailed possums vacate hollows, a single male, then a female with a young possum on its back. Despite attempts to catch these animals, they retreated into other hollows and subsequently this tree was left until the next day. When the hollows were rechecked, the possums had relocated and it was felled.

The night before the dreadful event of the felling of the forest monarch my feeling of dread prevented sleep. We admired this magnificent tree since moving here 22 years ago, enjoying the animal sounds emanating from her upper levels at the dusk roosting time and into the night.

Sometimes we would hear the bizarre, uncanny loud reverberating and whirring noise the yellow-bellied glider makes. At other times the piercing shriek of a hunting powerful owl and on one occasion found a beheaded ringtail possum in the front garden. Regular night calls heard were the squeak of the sugar glider and the call and response of boobook owls.

On Thursday September 15th the tree fellers moving eastwards reached the eastern end where our forest matriarch lived in the second block from the end.

The chainsaw operator squealed with delight the morning he saw the magnitude of the 50 metre tree he was going to fell. The first stage of the felling involved removing the three or four main upper canopy bearing limbs. They were huge and came crashing down with reverberation as they hit the ground.

The water table is still so high this year here in the lowlands, increasing the resonance of these collisions. To date I’ve recorded 2.5 metres of rain this year.

The searching of hollows took some time as there were so many in the tree, with the boom of the travel tower well extended to reach the upper trunk around 30 metres plus above the ground. It wasn’t surprising there was a nest with chicks found in one of the high hollows.

The sulphur-crested cockatoo nest was situated well down the hollow and the chainsaw operator had to cut a deep crotch below the hollow entrance to reach the nestlings. When they were finally retrieved and brought to a car in a calico bag for despatch to a specialist wildlife carer, I approached to ask if I could photograph the chicks, as part of documenting events.

Apparently wildlife carers have a policy of no images as the young woman yelled at me to ‘back up’.  I realised she would have been adrenalin-fuelled after being so high in the travel tower and the difficult extraction of the young chicks from the nest. Afterwards one of the forlorn parents returned to the now beheaded main trunk calling for her young.

The excavator returned after lunch with the claw-like attachment to clear the ground surrounding the remnant giant trunk. Around 3.30 pm on Friday September 16th, the excavator with the big ripper returned for the final act.

But that old tree stood its ground.

After repeated attempts of ripping roots and pushing against the trunk for perhaps half an hour, she finally gave way to the machine and fell back northwards hitting the ground with an almighty tremor which would have been felt throughout the district.

Although forestry is an approved activity for this development, and the contractor had separated out other large straight tree barrels (presumably to be sold to a sawmill), from the piles of stumps to be mulched, this forest giant with a straight trunk of about 25 metres was deemed unsuitable for this fate.

One can speculate on the reasons for this, but I suggest our matriarch tree’s impressive girth was deemed unsuitable evidence of destruction for further display. Thus the excavator with the claw returned on the following Monday and chopped and mangled that wonderful tree up into small sections for the chipper.

This was how our forest matriarch was treated - turned into a kind of mulch to be spread over the ground where she stood for all that time, functioning as a matriarch tree in the forest. The noise of the giant chipping machine these last three days have been unbearable without shutting all doors and windows.

The loss of such valuable tall trees and coastal forest habitat becomes a huge stressor for all species of animals that lived and visited here. Any surviving animals from the devastation must compete elsewhere for hollows and a place to live, placing additional stress not only on themselves but those animals that are living in forests nearby.

We have already observed the loss of a number of previously commonly seen birds in our garden such as the yellow-breasted robin and the eastern spinebill. The effect of this habitat disappearance is magnified because the clearing occurred in the spring nesting and breeding period.

The loss of the flowering and nectar resources (blackbutts flower during spring to summer), which the trees in this forest area provide is an additional environmental blow. Although some resident animals and birds such as the sulphur-crested cockatoo are not currently listed as rare or endangered, this habitat loss pushes them closer towards the endangered threshold.

The impact of tree removal extends to the nationally endangered threatened gang gang cockatoo. The removal of the blackbutt eucalypt trees and associated damage to the Eucalypt Sand Forests known in the Currambene Creek habitat in Jervis Bay, increases the already high threat to this species as they forage on the woody seed capsules of this tree which is in flower about this time of year.

Is this a parable of our modern value system, a symptom of flawed governance? How have we not learned to live with and respect our beautiful bushland environment and all the other dependent and interlinked forms of life living within it?

We have lost forever the untold ecosystem services provided by that marvellous tree. And what for - the development of a subdivision in a flood-prone area for monetary gain. Our forest matriarch is gone - forever.

6 comments on “The Passing of a Matriarch”