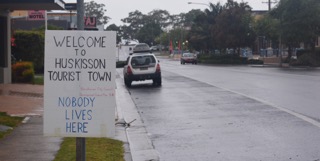 The latest edition of Shoalhaven City Council’s “On The Move” newsletter reminds readers of the importance of tourism to the local economy. More than $700 million annually we are told before being ‘reminded’ of the need for local residents to become “Tourism Ambassadors” attracting more visitors to the area.

Outside of Sydney the Shoalhaven has long been the number one tourist destination in the state. And within the Shoalhaven it’s Huskisson that’s the number one choice for visitors. Tourism has been important to Huskisson and the Jervis Bay area from the early days of white settlement. It’s no stretch of the imagination to see the Indigenous people of the area would have looked similarly upon it. Booderee, after all means bay of plenty, so plenty of time for cultural development and social activity.

Steel works, a major naval base and a uranium reactor are all part of the failed industrial developments the Jervis Bay area has avoided, although some would undoubtedly say missed out on. Should these developments have gone ahead the tourism potential of the area would be restricted to say the least.

As visitor numbers continue to rise, tourism it seems, is king, queen and wild card. But it may be timely to look at some of the broader implications for the local community and the local environment.

While tourism is vitally important to the local economy an SCC growth management strategy strikes a cautionary note, denoting jobs in tourism as being “… generally seasonal, part-time, subject to market fluctuation and relatively poorly paid.” Perhaps that’s all we’ve come to expect in an area with high unemployment. And with a permanent population of just 735 at the 2011 census – a number which has been fairly stable over the long term – this might go some way to explaining why there are so few home-owning families with children in Huskisson.

Not so long ago a building demolisher, hard at it on one of the original weatherboards in Hawke Street, was heard to say business was good. “There’s another couple of dozen to come down in the next couple of years,” he said. The increasing density of unit-ville has some merit, preventing the sprawl, which is naturally constrained by the surrounding National Park. The Lego-land sameness of these units has little merit, apart from keeping the price down.

Unit development is slower than the boosters would have liked. Despite developer’s claims and protestations during the approval seeking process, most of these are no more permanently occupied than they were  “shovel ready,” as proclaimed by those same developers – who then sit on approvals, unable to sell off-the-plan. A dormitory slowly unfolds as for sale signs are modified. Or taken down. Witness vacant blocks, often overgrown and unsightly, one with a hoarding almost old enough to claim heritage status of its own.

Official plans and strategies have long recognised the importance of maintaining the outstanding natural and cultural values of Jervis Bay, and the need to ensure developments do not compromise these values. The future of tourism has been noted as dependent on maintaining the areas qualities of “naturalness,” distinct from other coastal areas. But not all support that approach. In 2007 when then Planning Minister Frank Sartor was asked to take action over SCC’s expansive development plans for Huskisson he said it would be easier to get support for action if we “were on the central coast, or somewhere else that had already been over developed”.

Tourists want difference, which is the point of leaving home, and Huskisson has had a marketable point of difference from other coastal areas. An authenticity and sense of place. It seems not everyone values or understands this and it may be being lost, as we watch on, in the thrall of short-term gain which will undermine long-term success.

Apart from death and taxes the one certainty in life is change. When change is embraced it can bring harmony, a common purpose. When well managed, change can bring vitality. Most people appreciate the excitement of events such as the triathalon festivals and the Hobie world championships, despite the parking problems. New Years Eve in Huskisson is a magnet to visitors and locals alike.

SCCs worldview can be seen in its approach to climate change which is based on an assumption of minimal sea-level rise by 2100, appeasing low-lying beachfront property owners with concerns over valuations. Flying in the face of scientific evidence and the position of other coastal councils.

Some of these property owners are of the view, pun intended, that they are entitled to uninterrupted water views and coastal vegetation is not compatible with this. As far as Vincentia’s Collingwood Beach is concerned this seems to be getting a sympathetic hearing from council. “Our visitors want sea views,” some holiday rental property owners weep. The other major problem of course is the precedent that will be set should council adopt an option that requires regular pruning and thinning to maintain someone’s view. It’s not hard to imagine people throughout the Shoalhaven demanding the same approach to their foreshore reserve. The madness will spread.

Enthusiasm for tourism development may be apparent in council’s plans for the vacant block of land it purchased from the RSL. Initially, protection of the view was paramount to any commercial development on the land, but this may be changing. Have to get a return from the land is the new mantra. Innovative concepts put forward by the community don’t seem to be cutting the mustard.

More recently Council’s proposed dredging of the entrance to Currambene Creek to allow visitors on cruise boats to alight at the Huskissson wharf has taken the tourism boosters to dizzying new heights. This is despite serious concerns over environmental impacts and council’s own management plan that notes dredging is only ever a short term solution. And its cost analysis that notes this is a more costly exercise than council would normally consider. These new visitors will be able to choose from a spot of culture in Booderee National Park and the culinary delights or retail therapy of the local area. But it’s clear this is the thin edge of the wedge, with the long-term goal being further development upstream towards the Woollamia boat ramp. All, it seems, with the tacit approval of the local tourism industry who seem not to know what they depend on. A will to ignorance it’s called. Deliberately choosing to ignore inconvenient facts.

There’s no doubt about the Shaolin Temple proposed for land at Comberton Grange that council has spruiked for years and which included a proposed golf course adjacent to Currambene Creek. The generous payment conditions council offered the proponent along with the history of slow payment it accepted cement the view that tourism development rules. Mayor Gash sees this as a Shoalhaven-wide panacea.

Plans for a hotel on the Shoalhaven River and a marina somewhere, anywhere in Shoalhaven, come and go. A racetrack at Yerriyong is supported by all the vested interests who sprout jobs and economic growth at the glint of a dollar. Curiously though, Berry with friends in influential places, remains mostly off limits.

Back in 2004 Jervis Bay Tourism and the Huskisson Chamber of Commerce and Tourism embarked on a strategy for tourism development, with funding from SCC and the state government. Recognising the importance of community support for increasing tourism, residents and visitors were surveyed, noting their memorable experiences of Huskisson and/or Jervis Bay. The results were presented in a DVD, and included positive experiences such as the natural environment and the village atmosphere. The DVD also portrayed concerns, such as traffic congestion and the pace and scale of large development. Too honest for some, council promptly denounced the DVD as being “anti-tourism”. And demanded their money back. Tourism development good. Asking questions of tourism development bad.

And in the sleepy way of citizen engagement it passed most people that, back in 2007, when council amended the development control plan for Huskisson, it was denoted “Tourist Town”.  Those two words say, quite succinctly, how and where the community and the environment fit into the grand scheme of things. ■

Graeme Gibson was resident of Huskisson for 15 years before recently relocating to Kyogle in the northern rivers. He maintains an active interest in Shoalhaven and all things local. He has started a free monthly bulletin reporting on events in local communities and councils – the good, the bad and the ugly. It’s available at everyvilleblog.wordpress.com