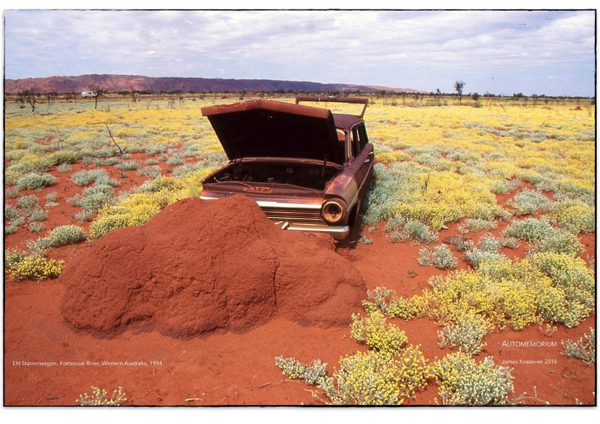 Based on the desire for total mobility and the serious physical pursuit of religious freedom, the auto drove mankind further than the wheel and, in remote areas even today, is forbidden as a device too suspect for human conveyance. This articulate conception has only brought us all more of the same - thoughtlessly locked into phase two gridlock, keyed up, on its rims and abandoned on the expressway. Europa, words Chris Stein, vocals Deborah Harry, New York band Blondie 1980 LP -Autoamerica.

What would be good to see in this wide brown land of ours is more trees, more parks, more passenger and goods trains, more buses, more pushbikes and pedestrians; more wind and solar farms, less open cut and underground mines, less fracking, less highways, less semitrailers, less trucks and less automobiles. It would be good to see these things for the sake of the planet and the people - no mater where we live.

The automobile looms large. Whether fuel- or battery- powered, the automobile’s function, importance and significance seems to be a given. At a few places around the world some of the good things have started happening and in Australia the struggle to make the argument to make things better continues.

In the epilogue of his 2009 book Bicycle Diaries, David Byrne wrote:
The fact is that in the twentieth century the automobile was subsidised on a massive scale. The nicely paved roads that go to the tiniest little towns and obscure regions in the United States weren’t built by GM and Ford—or even by Mobil and Esso. Those corporations benefited enormously from that system. Rail routes to small towns were allowed to wither and die and trucking became, for most goods, the cheapest and sometimes, the only way to get products from place to place.

In a 1996 article, English motor journalist Jeremy Clarkson wrote:
In a little over a hundred years, the motor car has killed more people than every single war that ever has been waged. Stacked up against the car’s adroitness at wholesale slaughter, the Somme begins to look like a Sunday School outing.

Clarkson made this statement to argue that introducing airbags as a safety measure will result in a “sharp rise” in the number of people being killed “all over Europe and North America” and concluded “by forcing car makers to give us safer vehicles, and by making the roads less dangerous, they are encouraging us to drive faster and faster. Couple this with ridiculous vigilant police patrols and they have a small fortune. People are dying out there, to pay for the National Health Service”.

The ways in which the automobile has loomed large in Australia are perhaps best summed up by looking at a piece of famous Australian cinema.

The production budget of the first Mad Max film released in 1979 was $350,000 and it grossed more than $100 million worldwide, becoming the most profitable film for the next 20 years. The most recent, Fury Road in 2016 won a record breaking 6 Academy Awards, the most of any Australian film.  Each of the 5 Mad Max’s have been written and directed by George Miller.  In interview, Miller said:

I guess any work is a sum total of what your experience is at the time. And there’s no question that Mad Max was influenced by my childhood in rural Queensland which … Chinchilla itself is west of the Darling Downs. Completely flat roads. Loamy soil. Heat haze. Burnt land. And with a very intense car culture. I mean the main street of town and Saturday night were just the kids in the cars. By the time we were out of our teens, several of our peers had already been killed or badly injured in car accidents. And there was just those long flat roads where there was no speed limit and people would just go. And that obviously had a big … impinged on me.
And it wasn’t until I really ended up being a doctor in emergency and seeing the kind of carnage as a result of car accidents or ‘bike accidents that it kind of got into me. It kind of disturbed me quite a bit. And I think all those things were part of the mix of the Mad Max films. Particularly the first one.

Graduating from UNSW Medicine in 1971, Miller’s residency was at Sydney’s St Vincents Hospital. In interview with Luke Buckmaster, Miller related one story of carnage he dealt with when in emergency.

On one evening… five people were rushed to the ER after a horrific accident. “There was a young girl they brought in,” “She had a rubber blanket around her, and I lifted it and couldn’t even make out what should have been her legs, she was so badly crushed.” He looked around for a place to insert an IV but couldn’t find a vein in her arm, so he inserted it into the young woman’s neck. She remained conscious the whole time, repeating two words over and over again: “Die me. Die me. Die me.” A priest was there, shouting out for her to repent. She was wheeled into the operating room and died that night.

It is little known that Miller’s first film Violence in Cinema: Part 1, made in 1971, when screened in the 1972 Sydney Film Festival, was placed in the documentary category “due to its matter-of-fact depiction of cinematic violence.”

Violence in the Cinema: Part 1 was simply trying to make the point that whatever we think, in terms of intellectually, the way we basically cerebrate something, is quite different than the way we experience it viscerally. And quite often the struggle of humans, of we as humans, is to find some way to balance the two. That very, very early reptilian part of ourselves and the more, if you like, you know, higher brain function of ourselves. Those two things are basically the struggle I think we
.always play out. It’s played out … will always be played out. And Violence in the Cinema was always that .A 20 minute film, Violence in Cinema is rarely seen

Reasons to be cheerful

David Byrne, a productively collaborative cultural hero of mine and who has a website titled Reasons to be Cheerful, Part 3 – after Ian Dury and the Blockheads’ 1979 song of the same name – perhaps best describes    why and what could be done to create more of the good things.

In 2004, the Pentagon sent a report to the Bush Administration informing them that climate-change is real and that it is more of a threat than terrorism and will – not might – have massive global repercussions. They predict world-wide scramble for survival and for resources that will inevitably result in an almost constant state of war around the globe.
This came from the Pentagon not the Environmental Protection Agency!
Riding a bike won’t stop that or many other dire predictions from happening in our lifetime, but maybe if some cities face the climate, energy and transportation realities now they might survive and even prosper.