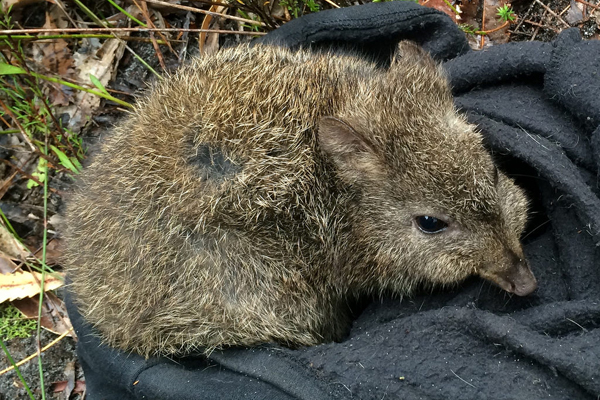 After ten years of planning, Booderee National Park has welcomed back a small population of long-nosed potoroo.

Thirty-five of these tiny members of the kangaroo family have been reintroduced into the park over the past 18 months, after being extinct in the area for many years.

The potoroos were captured from state forests near Eden before being relocated to their new home in Booderee National Park.

“Small mammals are vulnerable to predators like the introduced red fox. Our intensive fox control program over the past ten years has paid off - predator numbers have been significantly lowered to the point that the reintroduction of the long-nosed potoroo is possible.

“But we couldn’t do this on our own - it’s a great story of scientific collaboration across a range of agencies.”

The animals that were brought to Booderee were previously living in the vast state forests south of Eden, where a number of threatened species are now flourishing thanks to predator control by the Forestry Corporation of NSW.

“The long-nosed potoroo was one of the first species to increase.

“I was aware that Booderee wanted to reintroduce long-nosed potoroo into the park, so when our monitoring suggested that our numbers were robust enough to support a translocation, we gave them a call.”

Teams from Booderee, the Forestry Corporation, the Australian National University and the Southern Ark team from DEPI Victoria set traps in several areas in the state forests around Eden known to be inhabited by the species.

“Once trapped, the animals were given a health check by a specialist vet from Taronga Zoo before being fitted with micro chips and radio trackers to ensure we could track their movements and monitor their health in their new environment.

“These potoroos were trapped, checked, and released into Booderee on the same day in order to minimise any stress on the animals.”

Tony Carter, a member of the Wreck Bay Aboriginal Community and Booderee staff member, said long-nosed potoroo were once an important and abundant species for the local traditional owners.

“Our people recognise the important role these animals play in the health of our country,” Mr Carter said. “I am glad to see introduced pests managed to a level where important native species can be returned.” ■