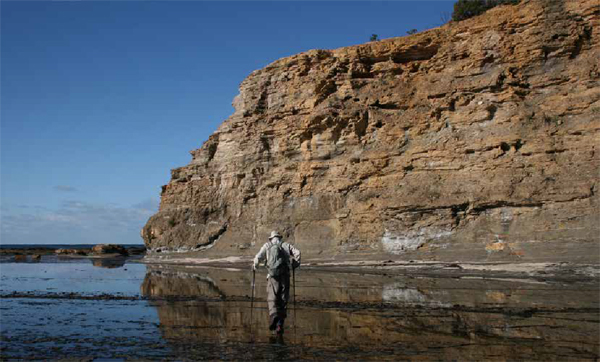 The Shoalhaven is the most visited region in NSW and its long and beautiful coastline has always been the main attraction. So it’s surprising how few walkers take full advantage of the multi-day, year-round walking opportunities on offer here.

One such is the Southern Shoalhaven coast walk (SSCW), a superb 55-kilometre, 4-day walk from the mouth of beautiful Narrawallee Inlet near Mollymook all the way south to Durras Lake, the Shoalhaven’s southern boundary. It traverses thirty beaches of all shapes and sizes, numerous headlands and rock platforms, seven lake inlets, some delightful tracts of forest and heathland with only a negligible amount of road-walking. At this stage it is more a concept than an official, waymarked walk. That said, a booklet describing 40km of this walk south to Merry Beach was published back in 2002 and may still be obtainable. In any event, the walk presents no great access or navigational difficulties if you keep the ocean on your left!

It’s a walk of two halves. The first few days, you’re never too far away from civilisation, mostly little coastal villages - so getting caffeinated won’t be a problem - but as you head further south you traverse the largely unspoilt landscapes of Meroo and Murramarang National Parks where you’ll experience a pleasing sense of remoteness.

With two cars at your disposal, the SSCW is most easily tackled as four day-walks, basing yourself at one or two places en route. Seaside Mollymook and Ulladulla or the lovely town of Milton just inland are northern possibilities, while Bawley Point or Kioloa/Merry Beach/Pretty Beach are good southern options. Through-walkers with backpacks can avail themselves of the many beachside caravan parks and there’s a free camping area in Meroo National Park. If you have an extra day or two, you might hire a kayak or stand up paddleboard in Ulladulla, visit some of the nearby wineries or head inland to walk in the iconic Budawangs. Shapely Pigeon House is the most accessible of the Budawangs peaks and makes an exhilarating half-day climb with a series of fixed ladders used to scale its upper ramparts. Named by Captain Cook but known as Didthul or Dithol (breast) in the Dhurga language of the Budawang people, it is a natural landmark holding significant cultural meaning.

After soaking in the views from the inlet mouth, it’s a beach, track and street walk to Bannisters Point, home to Bannisters restaurant run by celebrity chef Rick Stein. On the southern part of the point, a track leads you through a rare patch of littoral rainforest dominated by She Oak and Lillypilly. Walk along Mollymook Beach past cafes and around a headland to Collers Beach with its Bogey Hole natural rock pool. You’ll soon reach Ulladulla Harbour’s northern headland – make sure to do the One Track for All headland loop. Created by the Budawang Aboriginal Landcare group, it uses sculptures, carvings and signs to provide a confronting history of the area from an indigenous perspective.

The rock platform below Warden Head, the harbour’s southern headland (negotiable at low tide), provides a wealth of mudstone treasures with embedded dropstones and glendonites and a profusion of marine fossils – crinoids, sponges, worm burrows, bivalves and brachiopods. There are also trails circling the headland above the cliff line; the lookouts near Ulladulla lighthouse are a prime vantage point for viewing the annual humpback whale migration.

Continuing south towards Burrill Lake entrance, you can explore the South Pacific Heathland Reserve, a hotspot for spring wildflowers and for birds; over 90 bird species have been observed.

There’s a caravan park near the south end of Burrill Beach.

Cross the lake entrance (or detour over the road bridge if necessary), round Dolphin Point and Lagoon Head and traverse the walk’s longest beach – Wairo – to reach Tabourie Lake’s inlet, which can usually be crossed safely. Crampton Island, just off Tabourie Point can also be circumnavigated at low tide.

The SSCW now enters beautiful Meroo National Park with its handful of golden beaches bookended by rocky headlands and backed by tranquil lagoons. Rock-hopping around the headlands is an option at mid to low tides but there are easy-to-follow forest-track alternatives. The rocks at Termeil Point make for a fascinating geology lesson; seams of iron oxide criss-cross the softer stone like a chocolate box tray, sometimes empty, sometimes full. At Termeil Beach watch out for endangered hooded plovers and at the delightfully-named Armchair Beach, just sit awhile. Be sure to spend time on the wetland fringes of Termeil and Meroo Lakes where you’ll likely see black swans and numerous migratory water birds. Nuggan Point makes for a great rest stop before continuing towards Bawley Point village.

After two full days, today’s walk is a short one. Follow the coast to Murramarang Beach and the Murramarang Aboriginal Area, a 60-hectare reserve protecting the largest complex of middens on the south coast, where a variety of stone artefacts and rare bone tools have been discovered. The area was a meeting place and burial ground and Swan Lagoon behind the beach is home to the serpent associated with creation stories. Interpretive signs provide a self-guided tour, enhanced by views of Durras and Pigeon House Mountains and Brush Island.

More beach and headland walking brings you to Merry Beach with beachfront camping sites in the caravan park. From here, a headland walk takes you over Snapper Point to Pretty Beach but it’s far more interesting to rock-hop Snapper Point’s rock platform, another geologist’s delight. Pretty Beach, with its NPWS camping area, is the northern gateway to Murramarang National Park.

The best is left for last because the north Murramarang coast is the Shoalhaven’s secret gem and this is one of the state’s classic day-walks! Depending on the tide, you have the option of sticking to the coast (pathless at first) the whole way or heading inland up Durras Mountain where the views are limited by forest regrowth (there was once a farm on the mountain), before descending to the coast north of Pebbly Beach.

Staying on the coast, you’ll reach unnamed little beaches, undercut rock shelves, narrow chasms and – south of Dawsons Islands – a fascinating stretch of rock platform: pocked, cratered, honeycombed and littered with dropstones. Between Snake Bay and Pebbly Beach you’re back on a track, undulating through spotted gum forest and a series of rainforest gullies.

Pebbly Beach is flanked by steep headlands and its grassy dunes are grazed by a mob of kangaroos. The rocks can be hopped (or it’s a much longer road walk) around to Depot Beach, a tiny village enclave in the national park. If you want to break the journey, there’s another excellent NPWS camping area here with cabins also available (but no shop).

Now for the grand finale: a low-tide walk around the rock platform of the aptly-named (again by Cook) Point Upright, below spectacular, arching cliffs. Take great care as the rocks can be very slippery. At high tide or when seas are rough there is an excellent alternative – the Burrawang Walk - over the headland to North Durras Beach. A beach walk brings you to the hamlet of Durras North and the mouth of Durras Lake where the Shoalhaven coast ends and the Eurobodalla coast begins.

But that’s another story …