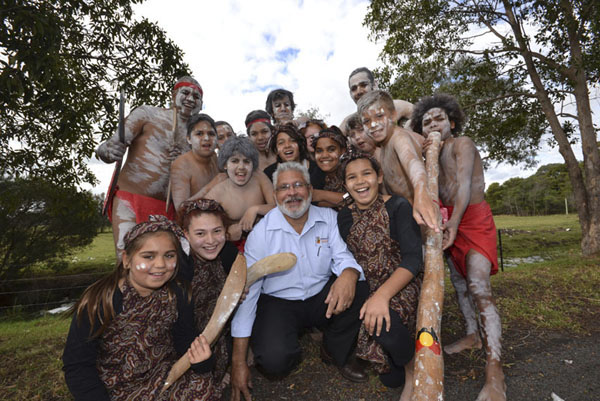 Congratulations to Fiona Philipps for being selected as ALP candidate for the South Coast (Gilmore) in the forthcoming federal election.

“I want to continue to ensure that every person regardless of race, gender, creed or culture is well housed, well fed and lives comfortably and without fear in our community.”

Aboriginal elder and community leader Gerry Moore has high hopes of being selected by the ALP as its candidate for Gilmore in the forthcoming federal election. The seat is currently held by the Liberal Party on a narrow margin. The ALP has not won in Gilmore since 1993 and believes it has a very good chance of success under new electoral boundaries, which Mr Moore believes would favour his candidacy.  If successful Gerry Moore would become the first Aboriginal elected to Federal Parliament from NSW.

As a realist Gerry knows the battle that lies ahead will be a tough one but as an indigenous leader he is no stranger to overcoming prejudice and winning gains for his people. Sixty-year-old Moore grew up on the then Aboriginal Reserve/Mission at Wreck Bay in Jervis Bay Territory. In a life dedicated to community service he has an impressive record of diligence and achievement. His career has spanned a number of agencies including health, housing, education and youth. Between 2008 and 2011 Mr Moore was CEO of the Aboriginal Legal Services across NSW and the ACT managing 185 staff. Since then he has been Managing Director of the locally based Habitat Personnel which has under his leadership become one of the leading Training and Employment (VTEC) centres in the country having placed some 750 applicants successfully into jobs.

When interviewing Gerry for this story what struck me most was his advocacy for the importance of education. Having had to leave school at an early age, he appreciates how most of the unemployed are unskilled and that many are early school-leavers. From his desk he produced not only figures but the respective names of the growing number of Aboriginal youth from each of our schools who are completing year twelve. What Gerry argues for with a passion is that education is the key to future success of his people. “For decades we’ve been allowing our kids to live a life in and out of employment, on and off the dole but that is beginning to change”, he voiced. “Employment is a big issue in Gilmore and what we are finding is with better funding through such measures as Gonski, Aboriginal children are doing better at school, which is the key to their future employment. What people don’t always realise is that education is an investment in the future. It is good for the regional economy and in the longer term will save millions in what otherwise becomes welfare payments.”

Gerry Moore is a person with strong traditional values. “In standing for Gilmore I want to continue to ensure that every person regardless of race, gender, creed or culture is well housed, well fed and lives comfortably and without fear in our community. This is my basic expectation because upon this foundation every individual can thrive.” He is conscious of the fact that in Gilmore, these are the issues that count.

Moore believes that his achievements in policy issues and practical outcomes speak for themselves; “I have a detailed knowledge of the mechanics of policy development and business practices over many years working in government and non-government organisations.  Throughout my career all of the organisations I have managed have exemplified good governance and probity. I am proud to say that the organisations that I manage invariably have very good morale and very strong human and industrial relations practices.”

It is this experience and these values that Moore pins his hope in winning support from many previous conservative voters. He believes that the people of Gilmore need better representation. He believes his career in Aboriginal advocacy is an ideal apprenticeship for political leadership. He has had many years’ experience representing his people and developing policies on the national and international stage as National ATSIC Commissioner and as a Regional Councillor. More locally Moore has been an active member of the Shoalhaven Business Chamber and is currently a board member. He sees the Chamber’s work as one of many conduits essential for his organisation Habitat Personnel’s involvement.
If Moore is successful in his bid for Canberra, he will not only make history by being that first indigenous representative from NSW in the Federal Parliament but he is likely to play an even more significant role in Aboriginal and Torres Strait Islander affairs. (See page 4 Call For Action on Aboriginal Policy in which Gerry outlines his personal views on the Abbott Government’s failures and his hopes for change under Turnbull.) ■