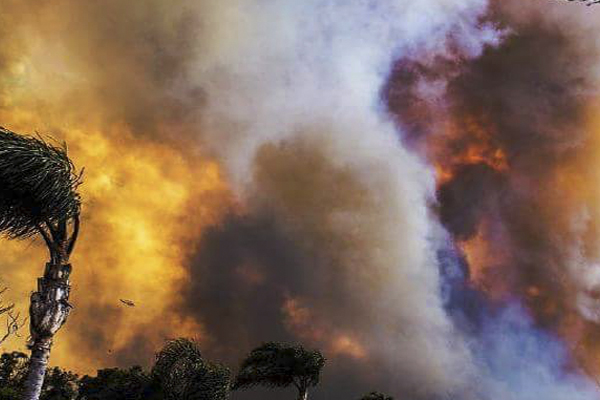 After the fires have ripped through the town, after the horror has been lived and the whole damn disaster is still sinking in; while the loss is still raw, and grief is still overwhelmingly real; another challenge begins. The assessment of the damage. The devastation to the environment, the wildlife lost, the homes, the memories.

The damage from the fires was huge. Official figures confirm 65 houses, and 35 caravans and cabins were destroyed, with a further 48 damaged.

Tathra is quite an advanced town when it comes to sustainability – honouring its commitment to 50/50 by 2020 with community energy initiatives on most community buildings and a beautiful solar garden which spells the words image.

The town is climate aware and yet it was caught out in this fire by a lack of communication – a mobile blackspot awaiting funding, not prioritised. Caught out by a totally freak event – an extremely hot day - in March, early Autumn, an unprecedentedly hot day, in an unprecedentedly hot month, in an increasingly hot year. In fact, it didn’t feel like late autumn at all. It felt like Summer. Not Spring even. Summer. In March. Temperatures reached 40.1 degrees in Sydney’s Bankstown; although in Tathra itself it was relatively mild 35 degrees maximum.

With international efforts attempting to keep increases in global temperature rises below 1.5 degrees C of warming, the Tathra fires clearly demonstrate some of the things we will be dealing with as weather becomes more unpredictable and extreme.

Along with the pressures, distress and panic that such a catastrophic fire will no doubt bring, went the blame. Rumours circulated of warring fire factions, community demands, back burning accusations, and of course Malcom Turnbull on his visit to Tathra after the fires, normalising the extreme fire event as something that always happens in Australia and always will.

“To say that there always will be fires, when we know that it is a climate related event, was damming the next community to exactly the same fate as ours, without ever trying for a better outcome for that community.” Says Jo Dodds, Councillor with Bega Valley Shire Council, and Tathra resident.

The fire department has long been training its force in preparation of extreme fire events, how best to deal with them, how best to fight them. Some reason the importance of drone maintenance of forest areas, so as to spot fires early, getting teams to them before the fire can take hold. However, whatever sparks a fire is simply the trigger; the igniting of what is already there to burn. And for an extreme fire event to take place, the fire is already there waiting greedily, hungrily, ready to come to life, to go off in a second.

“Fires are an interesting one because they don’t just start over nothing, you can have all of the conditions for a hot terrible fire day, but as long as nothing ignites it, nothing happens. It’s a complicated series of events that has to happen for a fire, as opposed to a flood or tornado. There were at least 10 other fires in the Bega Valley that day, the intense wind being the key factor that set off the one in Tathra.”

“Afterwards I was able to step back, and do a risk assessment, think about what caused this, and how could I stop this happening again. Just that stepping back, made me very very aware of the risks we’re going to face in increasing numbers as the temperature rises. Because it only has to change minutely to change the weather patterns, and the moisture that’s held by the landscape. People cannot know what it was like to stand in that wind and the heat of the fire and watch what can go wrong with one spark. One spark on one of those days can take lives, houses, wildlife, forests.”

And the impact. Fires create a lot of destruction, it destroys homes, ripping through them like a furnace of heat, leaving debris littered everywhere. Asbestos burns, damages, slays. Then there is the actual environmental damage, such as the asbestos and chemicals illegally dumped in the forests, now exposed after the fire has ripped though. The wildlife lost. Habitat gone.

And then there is the soil conservation risks. With large areas of natural covering stripped away, by the fires, low shrubs and grasses gone, the steep slopes from the forest have no defence in heavy rains. Polluted soil can wash down into to the Bega River below, right where it meets the oceans and the sensitive lagoon ecosystems exists.

“My big call is to ask people to step back from the politics, step away from the shouting voices and the agendas and have a look at the likely consequences for their community of having climate change continue on the trajectory that it is on,” warns Jo. “Because it is going to bite, and when it does, it bites hard. It takes your house. It takes your pets. It takes all of your memories, and in the worst case it takes lives.”