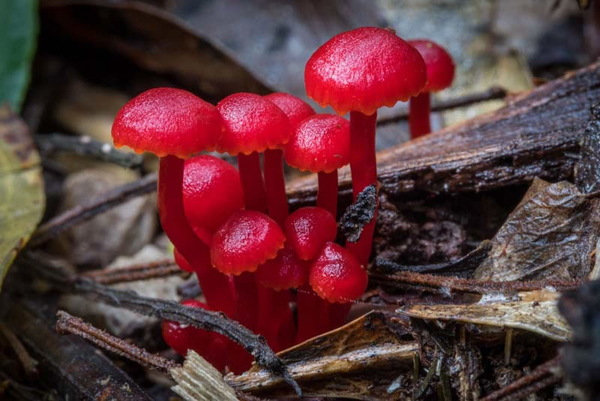 When you look at an EIS or National Park Plan of Management, you always see sections on flora and fauna, but seldom even a mention of Fungi. The Fungi Kingdom seems to be somewhat neglected.

This should not be the case. Fungi are found in all environments. They are around the roots of most plants, in the stomachs of most animals. They range in size from microscopic yeasts to huge fungal mycelium that thread their way through hundreds of hectares. They make up perhaps 25% of the biomass.

The average person thinks of fungi as mushrooms, and indeed the word “fungi” is derived from the Latin word for mushroom, but they are much more than that. Mushrooms are thought to make up only about one fifth of the Kingdom. Other types of fungi can be brackets, clubs, cups, strange coral shapes, truffles, morels, stinkhorns, moulds, smuts are rusts.

DNA analysis shows that fungi are closer to animals than plants. They have no photosynthesis and obtain their nutrients from the breakdown of decaying organic material. This is mainly plants but can be animals, dung or even other fungi.

Fungi often reproduce both sexually and asexually in cycles. Most of their life is spent underground or inside a host such as a rotten log. All they consist of is a tangle of microscopic threads called hyphae. At certain times, often in response to rain, the mass of hyphae form larger threads called mycelium and from this can emerge what is called the fruiting body – the mushroom, or coral, club, cup etc.

It is the tiny hyphae that are so important to the environment. Most plants have mutually beneficial relationships with fungi. Fungi are mycorrhizal partners of plants – this is where the plant root is combined with a fungus. This greatly increases the effective surface area of the root helping the plant obtain more water and nutrients, and the fungus gets some of the products of photosynthesis. Some plants like orchids often need certain fungi present for their seeds to germinate.

Fungi can been seen all year round. Some species like truffles develop their fruiting bodies underground so can grow in dry areas like deserts. Most fungi are seen when their fruiting body emerges from soil or logs or other substrates. In NSW this is usually during Autumn (or perhaps more accurately January to August), often in moist environments such as rainforests and then more than likely a few days after a reasonable fall of rain.

The next time you are in the bush keep your eyes open and look out for fungi. Once you find one, look for more nearby. They often occur in clusters that include many species. These fungi one day may help us learn the biochemistry to break down pollution or to kill tumours.

And to finish – do not eat any fungi you find in the bush. Even experts make mistakes with identification, and a mistake may be fatal.

(This article first appeared in Nature – the Journal of the National Parks Association of NSW).