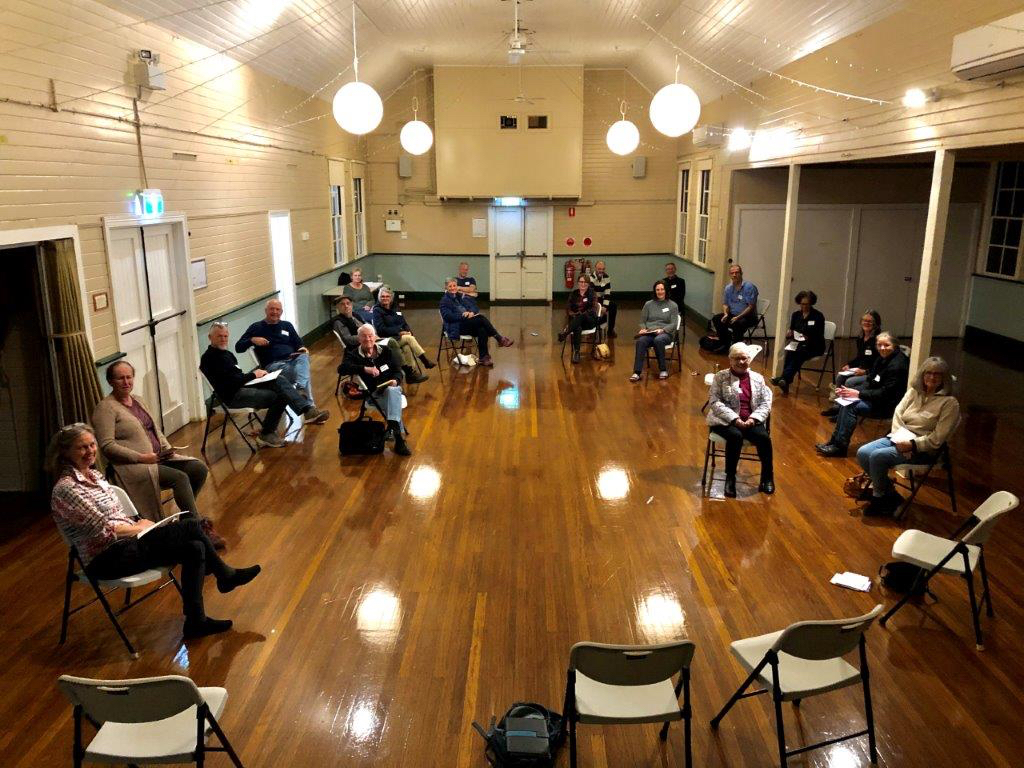 In line with its first aim, the ‘Bushfire Ready Neighbourhood Groups’ concept was instigated, a grassroots initiative, to increase neighbourhood preparedness for bushfire and to optimise the community’s outcomes in the event of bushfire impact.

This type of community-based action has been implemented successfully in various forms in several other states and is in line with recommendations coming out of the Royal Commission following the 2009 Victorian fires to: “Ensure that local solutions are tailored and known to communities through local bushfire planning.”.

Bushfire Ready Neighbourhood Groups are formed around feeder roads or geographical neighbourhood clusters of approximately ten to 15 households each. Groups have a coordinator who helps to administer the group’s contact information and can liaise with other coordinators and be a possible point of contact with the local RFS.

A coordinator does not have responsibility to ‘teach’ others how to prepare, to ‘stay and defend’, to organise or assist group members in the event of fire impact, or to play any firefighting role during a bushfire.

Initially nine groups were formed in the Upper Kangaroo River area. These groups met together and set up internal communications networks, often using ‘WhatsApp’. They shared their household bushfire survival plans, discussed their household’s preparations, shared knowledge and ideas on bushfire readiness, identified vulnerable members of their neighbourhood group and how they might be assisted in the event of a fire threat. They also discussed the management of livestock and identified possible ‘safer places’ within their neighbourhood and how they might be accessed in the event of fire impact.

Some groups developed a neighbourhood map with a corresponding contact list that could be shared with emergency services that might attend their area. Some groups wrote up a simple neighbourhood plan that documented the outcomes of their group discussions.

As the 2019/2020 fire season approached many more neighbourhood groups were set up across Kangaroo Valley, some hurriedly meeting and setting up communications networks in the weeks and days before the Currowan fire arrived.

As the Currowan fire moved towards Kangaroo Valley, the neighbourhood groups provided a framework for the Kangaroo Valley volunteer Rural Fire Brigade community engagement officer, Mike Gorman, to meet with people in manageable sized groups in their own location. This enabled detailed information to be shared about the likely fire impact and answers could be given to very targeted questions from community members about their specific situation. Those who attended these meetings found them to be very valuable and report gaining understandings that helped greatly in their decision making about staying or leaving early.

Before the fire impacted Kangaroo Valley, the neighbourhood bushfire ready groups were also able to provide, through their coordinators, a list of residents and their intention to leave or stay and defend. This provided valuable information that could inform emergency services and also helped members of the group feel more confident about their own situation and that of their neighbours.

After the fire impacted, the neighbourhood groups were a very useful way of disseminating critical information and providing community support, both practical and emotional, on a very personalised level, which is still proving helpful, eight months after the fire impact.

“We all kept in touch and people contributed what they had discovered. The street is closer as a result of sharing on WhatsApp” Sue Williamson, Nugents Creek Road

At the group coordinators meeting held in September 2020, at the beginning of the 20/21 bushfire season, many positive outcomes were reported. Particularly the value of effective neighbourhood communication during an emergency, a raised awareness of the impending bushfire risks and the sharing of bushfire preparation, knowledge and processes.

Especially noted was an increased sense of connectedness and support between neighbours, including the awareness of and support for more vulnerable members of the group. Coordinators identified lessons learned and concerns and shared ideas for more effective group operation during the upcoming bushfire season and into the future.

Into the future… the 2021 fire season and beyond

Many groups are planning to meet again soon as the 2020/2021 fire season has officially begun. Each group tends to have its own ‘style’ and be as simple or as comprehensive in its operation as the neighbourhood decides.

Bushfire Ready Neighbourhood Group experiences in the face of the Currowan fire in January 2020 indicate that, together, we are stronger, safer and more resilient. Neighbours supporting neighbours… it’s the ‘community’ thing to do.