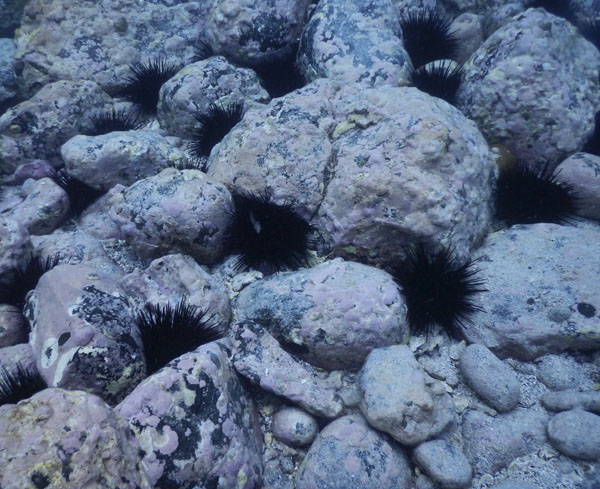 When we stand on a headland and gaze out over the ocean, many of us have little idea of what the underwater scene actually looks like. Few would know that half of the shallow rocky reefs on the South Coast of NSW look more like an underwater moonscape than a healthy and diverse habitat. Over the years, millions of purple sea urchins have grazed down the kelp forests, leaving just bare rock covered by stony encrusting algae, the urchins themselves and a few tough critters eking out a minimal existence. In these areas there is virtually no plant life.

These areas are actually known as ‘urchin barrens’. They have lower productivity and lower biodiversity than the kelp forests they have replaced. More research on the problem needs to be done but the present situation is the result of ecological processes that have been going on for many years that can be traced back to historical overfishing of the natural predators of the urchins, such as rock lobsters, large snapper and blue groper. This has allowed urchin numbers to explode.

The Eurobodalla-based Nature Coast Marine Group has been trying to get the State Government to recognise the problem of urchin barrens in the Marine Estate review that has been going on for the past six years. NCMG provided detailed information for the government’s Threat and Risk Assessment last year that was part of the review. The NCMG also raised it with officials directly. Despite the fact that DPI Fisheries scientists and other experts are well aware of the problem and its causes, the government’s subsequently-released draft Marine Estate strategy contained nothing specific aimed at turning this situation around. There was not even any commitment to undertake research into the problem.

Because of this lack of government responsiveness, NCMG ramped up its efforts through writing to relevant government ministers and by bringing the situation to public attention. During January there was extensive south coast print media coverage and some by ABC radio. A feature was the extent to which others with a stake in the marine environment, such as abalone and urchin fishers, spoke out about their concerns over the urchin problem. To help people get an understanding of what these barren areas look like, the NCMG produced a short video, that can be accessed at https://www.youtube.com/watch?v=HGYj8YItrXA .

There are now some signs that the Government is starting to take this problem seriously, at least in the Batemans Marine Park. And there is every reason to do so. A decline in productivity and diversity is obviously bad for the environment. But there is an economic dimension as well: urchin barrens are bad for the abalone industry and even for the urchin fishery. And it can’t be good for fish populations since no plants and their associated animal life means no food for the smaller creatures and fish on which bigger fish feed. And that is before we consider the multiple and serious challenges posed by climate change. Something needs to be done, starting with a strong local research program.

Bill Barker is President of the Nature Coast Marine Group – www.ncmg.org.au, info@ncmg.org.au or on Facebook