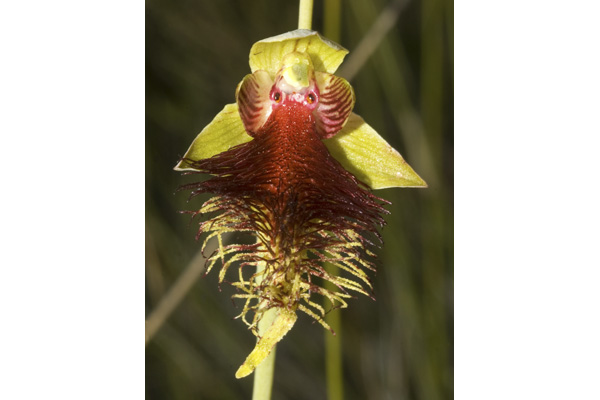 Is it just certain areas?

Since I became environmentally involved as far as orchids and their habitat are concerned, I have read numerous environmental assessments (EA) produced by numerous individuals and companies. Without exception, this academically unqualified orchid person has been able to find fault with all of them, mainly due to the obvious lack of orchid knowledge or awareness of those responsible for the assessments and reports.Many of those who undertake this work have a tertiary degree of some type.

Some have a degree in environmental science, a masters degree in science (MSc) or a PhD. Again, most of these have knowledge of trees, general native vegetation, birds, reptiles and weeds and without fail all are capable of writing a very good report, which is something with which I often struggle.

My introduction to this side of the orchid world came in 1995 when a proposal to construct a 1000ha waste facility was undertaken, initially with desktop surveys using topographical maps to find a suitable location. The very long list of 42 sites was eventually reduced to five and an EA was conducted over these sites with a final selection confirmed. The area selected featured a steep forested gully with several small creeks either in the gully or adjacent and all of these creeks flowed either into a lake or the Pacific Ocean. The area was mainly NSW State Forest and logging was intensified to destroy the area as with an upcoming state election the leader of the opposition promised to declare the area as National Park if he was elected and the idea of course was to destroy the are to make it unworthy of national park status.

At this time, many locals who did not want the area destroyed formed a group opposed to the waste facility for many reasons, including loss of habitat and also the probability of Aboriginal sites being destroyed. Also at the time my daughter was attending high school with the daughter of a lady married to an indigenous man and the wife became involved with the local opposition group to identify and protect certain sites. During one of her visits to the area she took a very average photo of a plant she was unable to identify which I easily identified as Calanthe australasica, a very large evergreen terrestrial orchid but at this time not in flower. My interest was heightened and a few days later we visited the area and within 2 hours I had managed to locate and identify 19 orchid species. Some were terrestrial but epiphytes and lithophytes were also observed.

I then wrote my first ever environmental report for the group opposed to the facility and I was later informed that basic report was widely distributed among the environmental legal fraternity. To date 21 years later no waste facility has been constructed and the politician (Bob Carr) kept to his promise with the area now being The Greater Conjola National Park.

A couple of years following that episode another situation came to light via the work of the same person. This involved an endangered species, Prasophyllum affine and as another endangered species had been discovered nearby many years ago it was also a requirement for survey. This species was Arachnorchis tessellata and a few things went wrong with this survey. It was a requirement of the Director General of National Parks that any plant unidentified during the survey should be identified via a Botanical institution but his message failed to resonate. Firstly, the survey for A. tessellata was conducted shortly following a fire and several months before leaves were due to appear. A survey later in the year noted many orchids including Prasophyllum brevilabre, Prasophyllum elatum and a further Prasophyllum sp., which was not identified until a few years later and not by those involved in the proposed development.

In due course after the establishment of a Recovery Team and the withdrawal of the company which originally had the rights to construct a large Regional Shopping Centre and residential estate, another large developer took over and appointed another EA company. The new company began surveys and at the same time I was involved in another EA at a site 500mts distant across the other side of an intersection. While working one morning I received a phone call from the head of the EA company who asked me a question about Cryptostylis hunteriana for which both of us were surveying at different sites. I was asked, Alan, this orchid we are looking for, can you tell me what it looks like? I was more than surprised but said to get to my site as I had several plants in front of me. When these were witnessed by this person all was okay but again the impression was that a tertiary degree is no guarantee of orchid knowledge. This person was then familiar with P. affine and C. hunteriana but at the same time managed to overlook Calochilus pulchellus, one plant of which was growing in a stump with flowers at eye level. The site I was assessing contains many plants of Cryptostylis hunteriana and a handful of Prasophyllum affine but the person who conducted the fauna assessment failed to notice the endangered Ground Parrot but as luck would have it one rose from the grass when I was in consultation on-site with the landowners and they were horrified.

One local development company is well known for its choice of an EA surveyor and the EA reports are interesting reading. In one section where orchid species are listed, Cryptostylis species are listed as Cryptostylis subulata and Cryptostylis sp.  As three of the four species in this genus are evergreen with a leaf available all year around, there is no excuse for failing to identify one of the species but for this firm it is a regular habit.

Furthermore, the same person stated in a report for the leafless species in the genus “we have conducted walked and driven transects”. Many orchids can be seen from a vehicle but I found this to be either lazy, incompetent or immoral.

Almost as bad was a survey of 31ha of land stated as being conducted in “three person hours”. This survey preceded the proposed establishment of yet another very large waste facility. This facility would source its waste from as far away as Bega, 260km further south. The waste to be transported on countless “B Double” trucks would not be sorted and could contain chemical waste, Asbestos or a range of other hazardous substances. To reduce noise to two residents a four metre high brick wall would be constructed on the boundaries of their rural lots. There were five endangered species within the specified radius but at the time of the survey not one would have been above ground and visible, let along be in flower so as the be recognised. The facility was refused following several hearings by the Southern Joint Regional Planning Panel (JRPP) but orchids were but a minor part as all creeks in the area ran into the Jervis Bay Marine Park or a water body known as St. Georges Basin. In addition to this the so-called sedimentation ponds were poorly designed and constructed without permission. The second and final sitting of the JRPP made the decision less than five minutes after final submissions were presented.

For a recent development, yet to be determined, surveys were undertaken by several persons looking for C. hunteriana but the transects used were as far apart as 50mts. I feel my orchid eyes are fairly good but could never claim to see a plant of C. hunteriana either in bud or flower from that distance.  The same people also missed listing Cymbidium suave, Orthoceras strictum, Dipodium variegatum and Prasophyllum flavum, all of which were in flower at the time of the C. hunteriana survey. I know they were as I and a group of non-orchid locals found these and a further 19 plants of C. hunteriana, unseen and unlisted by the so-called professionals. To add insult to injury we listed all of these orchids in separate submissions and the so-called professionals added them to their list as their own discoveries. It appears morality and ethics are unknown qualities as far as some are concerned.

The most recent situation is currently under consideration and has attracted the NSW Land and Environment Court and concerns the lack of a survey for Speculantha ventricosa, a critically endangered terrestrial. The land for 58 units has been cleared but this is only part of the problem. There are several other endangered species within six kilometres of the site and none have been subject to a survey. These are Cryptostylis hunteriana, Prasophyllum affine, Calochilus pulchellus, Genoplesium baueri and Rhizanthella slateri.  I am hopeful of being one of six people permitted to speak to the Court at an on-site meeting but as I write this is yet to be determined.

Am I wrong in thinking my local government area is alone with being continually subjected to a very poor standard of environmental survey, or is this affliction spread across NSW and other states? I can only hope this is not the case, as if it is, our orchids and their habitats are destined for extinction. I am aware some developers use certain people so as to assure them of a pre-determined result and this has been obvious to me for many years. ■