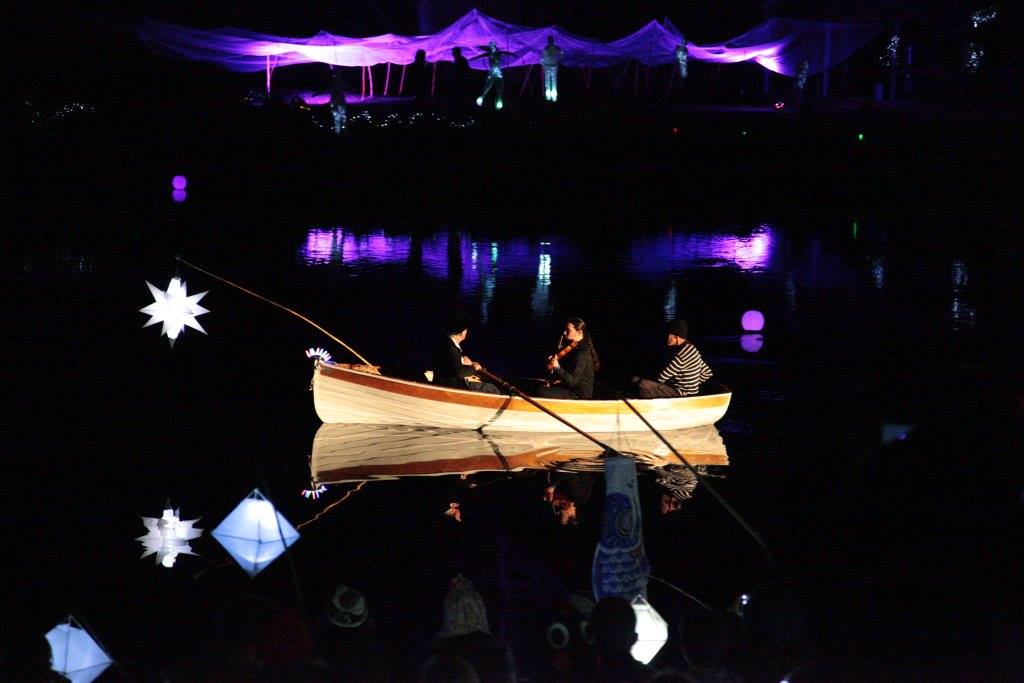 Look, mum, up there, in the trees!

On the evening of June 12th, an unusual sight will greet onlookers gathered around the fish pond in the grounds of the Jervis Bay Maritime Museum. A giant image, will appear in the trees along Currumbene Creek, and Julie Freeman, a local artist, will narrate an indigenous story to the crowd gathered below.

It’s all part of closing ceremony of the Seechange 2016 Jervis Bay Arts Festival. The festival, which runs from May 20th to June 12, is held every two years, and is a celebration of the arts in the local Shoalhaven and Jervis Bay and Basin areas.

The person responsible for projecting the image onto the trees is digital artist Craig Walsh. He is one of a new breed of contemporary artists utilising digital projection, video, sound and photographic technologies to tell a story.

A country man himself (he was born in Orange, and lives and works in Tweed Heads in NSW), Walsh is an Australian artist who is also a major figure in the international art world. He’s a sculptor, photographer, performance and digital media artist who has exhibited at art exhibitions, music festivals, and big outdoor events all over the world. His CV is too long to be listed here, but includes group and solo exhibitions at the Museum of Contemporary Art, the Yokohama International Triennale of Contemporary Art, the ZERO1 Biennal at San Jose, California, and the Koganecho Bazaar, Japan. He is also an Adjunct Professor at Griffith University In Queensland.

He’s especially well known for his work with regional communities, creating works in specific regional locations that interpret those locations, revealing their deeper significance, to the people who live there.

For example, in 2010, working in collaboration with the Boolarng Nangamai Aboriginal Arts & Cultural Studio in Gerringong, Walsh projected a nighttime video image of a Gorawarl Jerrawongarla woman, Julie Freeman, onto the headland at Bombo, north of Kiama. She told a story which had been passed on down through the generations in her family—the story of Kiama, an ancestral spirit who guides indigenous fisherman from the sea back safely to dry land.

On June 12, the image of Julie Freeman will feature again this time in the closing ceremony of Seechange at the Maritime Museum, following a lantern parade and a musical performance centered on the Museum’s fish pond.

Diana Lorentz, who is a Jervis Bay and Basin Arts committee member and also Manager of the Museum, says that JBB Arts is bringing Walsh’s work to Jervis Bay for two reasons.

One is to encourage people to see their relationship to the natural environment of Jervis Bay in a new light. The other is to showcase to the community, especially students, about the importance of the role of multimedia in contemporary art.

“Craig’s work is at the forefront of digital media, which is at the forefront of contemporary art,” says Lorentz. “Governments, schools and universities are all keen to encourage the links between arts and the sciences, and inspire students in particular to get involved in creating art that involves science and technology,” she says.

Walsh’s art and projection techniques are similar to those used in the Vivid Light festival held each year in Sydney. But Vivid has been criticised by some people for becoming superficial and commercial. “Craig’s work is  more interpretative and more meaningful for the audience, revealing more about the locale to the participating community and to visitors. It has more resonance and leaves more of an imprint on the viewer,” she says.

Walsh’s artwork and performance has been made possible though financial support from Jervis Bay and Basin Arts, the Jervis Bay Maritime Museum, and Shoalhaven Council, through the Shoalhaven Arts Board.

The lantern parade and the Craig Walsh art event will take place on Sun 12 June, at the Jervis Bay Maritime Museum, Dent St, Huskisson, from 5-9 pm. Market-style food and beverages will be available. Dress warmly, and bring a torch. ■