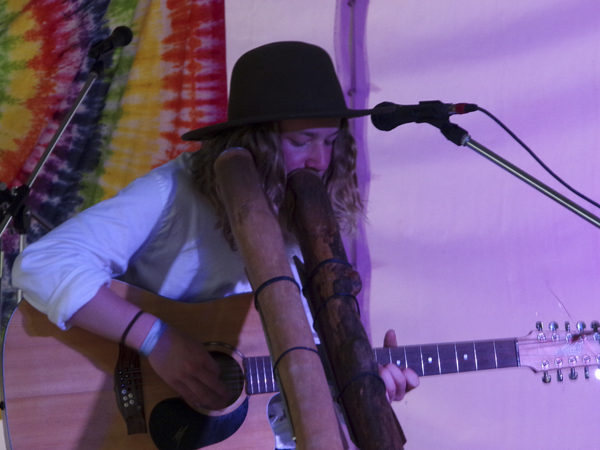 Whilst not yet having achieved quite the fame of the Shoalhaven’s very own Liam Maihi, another young entertainer is beginning to make a name for himself on the Folk Music scene. Daniel Lucas, a Nowra High student recently captivated his audience at the Kangaroo Valley Folk Festival. Daniel hails from Tomerong and you had better believe he is good. As he struts his twelve string guitar filtered through various effect pedals whilst combining it with didgeridoo and various percussion instruments, you are left spellbound.

When Daniel finished his bracket those lucky enough to hear his performance were on their feet applauding and demanding an encore. Looking a little surprised Daniel mumbled that he had “nothing” else prepared, so he would need to improvise. If what followed was “improvisation” long may he continue doing so. This boy has talent. I was particularly struck by his didge playing.

Daniel says he has been influenced by such artists as Daniel Champagne, John Butler and Xavier Rudd -all big names on the folk music scene but none I suspect could make the didgeridoo “sing” the way Daniel does. A recent winner at Shoalhaven Unearthed, Daniel is a name to watch for in the future and I hope to have the pleasure of hearing his performances at many more folk festival gigs.

Folk festivals are marvellous family occasions. I discovered them some years ago and they are popular with many Shoalhaven families. Usually encompassing a full weekend what parents find is a safe environment where children can run free with a variety of entertainment being provided for all

At the smaller Cobargo Folk Festival 26-28 February families can enjoy venue camping with weekend ticket prices ranging from around $100 for adults; $50 for youth and children under 12 free.