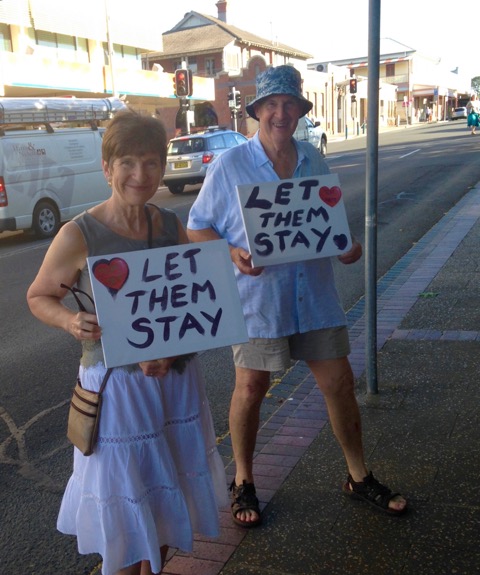 Following a call from GetUp for snap rallies around Australia, a group of Shoalhaven locals gathered on the door step of Federal MP Anne Sudmalis’ office in Berry Street, Nowra on the night of 6 February, 2016.  Over 160 locals sent Ms Sudmalis, the Government and the opposition a message that a great number of Shoalhaven locals stand against mandatory immigration detention and called for a shutdown of third party processing centres on Nauru and Manus Island.

The rally came with the #tag Stand for Sanctuary and Let them Stay supporting the call to Prime Minister Turnbull to allow  267 Asylum Seekers facing imminent transfer back to Nauru to stay in Australia.  Some of the 267 are women who have been sexually assaulted on Nauru and now face return to their abusers.

The rally was representative of the swelling tide of Community action against the Government’s immigration policies and treatment of Asylum Seekers and Refugees.  Participants heard from Stuart Rees AM, Director of the Sydney Peace Foundation at the University of Sydney, Amanda Findley, Greens Councillor, Susan Locke, Amnesty International Berry and Kerry Sawtell, Child Protection worker.  Members of the community included the clergy, health and education workers, musicians, artists, parents and children.  Ordinary, thinking Australians who are willing to stand up for what is just and humane.

Stuart Rees drew on writer and philosopher Hannah Arendt’s concept, ‘the banality of evil’.  Arendt’s thesis was that people who carry out unspeakable crimes may not be mad fanatics at all, but rather ordinary individuals who simply participate in any ongoing enterprise with the energy of good bureaucrats.  The process whereby unacceptable actions become routine and are accepted as “the way things are done”. If a crime against humanity had become in some sense “banal” it was because it was committed in a daily way, systematically, without being adequately named and opposed. The crime had become for those involved accepted, routinised, and implemented without moral revulsion, political indignation and resistance.

The United Nations Human Rights Committee’s finding against Australia related to the indefinite detention of refugees with adverse security assessments. The Committee found that Australia was ‘inflicting serious psychological harm upon them’, which amounted to cruel, inhuman or degrading treatment. The Australian Human Rights Commission found a significant gap between Australia’s human rights obligations under international law and the current treatment of asylum seekers and refugees.

Australia’s major political parties do not demonstrate any moral revulsion, political indignation or resistance.  They speak as one.  And so, members of the Shoalhaven spoke as one on the evening of 6 February, 2016 - a humane solution needs to be found.

Amanda Findley said we are an open nation and yet have a political class that refuse to acknowledge that real Australians say welcome.  Write to politicians and sign petitions.. ■