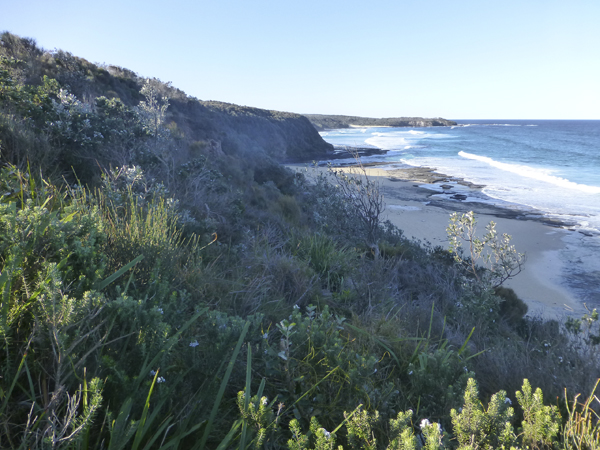 Stretching along a sheer clifftop in south Ulladulla, the South Pacific Heathland Reserve is a little bit of coastal bushland that is once again becoming a local icon. This follows the announcement that The Trustees of the Reserve have been awarded the Crown Reserve Trust Community Manager’s Award. The award and $2,500 prize money were presented by the NSW Minister for Lands and Forestry, The Hon Paul Toole MP, at a gala dinner held in Newcastle recently.

Located directly behind the ExServos, the 14 hectare clifftop Reserve exists for the protection and study of native flora and fauna.  The Reserve is currently managed by six volunteer Trustees.  As Community Trustees, they are responsible for the management of the Reserve; for maintenance and upgrade of the paths, weed management, signage, seating and more.  They also have to raise all their own funds to do it.

The 6 Trustees are all local women with a passion for our local environment and our local community:  Helen Moody, Donna Payne, Robyn Russell, Annie Boutland, Nicky Royall and Cate Brooks were appointed as Trustees in December 2014 and straight away set out to make a difference.

Over the last three years, the Trustees have successfully sought grant funding to improve the amenity and accessibility of the Reserve. They have upgraded walking tracks, installed a new accessible track to the southern lookout, improved signage, produced a brochure and run regular community events in the Reserve. The Trustees aim is to increase the visitation and appreciation of the Reserve and its diverse flora and fauna.

The Reserve is regularly used by many community groups and increasingly valued as a community, recreational, conservation and scientific asset.

The Reserve has over 200 species of flora, including several that are listed as rare and endangered, and over 90 species of birds, including the threatened glossy black cockatoo.  So while it is a relatively small area, the Reserve possesses a remarkable biodiversity that makes it particularly precious and an area of environmental significance. It has several different vegetative communities, including a precious section of sand heath, which is relatively unusual in the area, and two lookouts that afford spectacular ocean views and which are especially popular during whale migration seasons.  The wheelchair friendly accessible track to the southernmost lookout was funded by the first grant received by the current trustees.