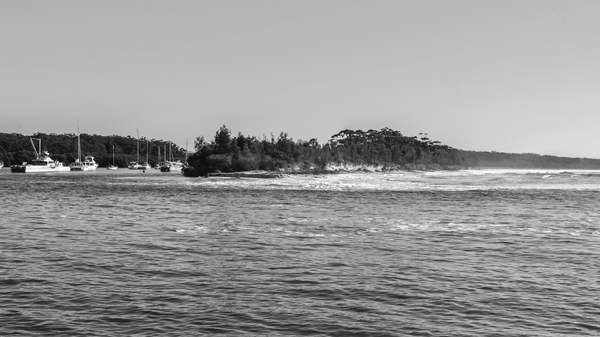 The New Bush Telegraph has provided coverage for some time of the Shoalhaven Dredging Project and featured an article in the last edition indicating the extent to which the August 2015 floods had negated the need to dredge as originally planned.

It would have been expected that the dredging would not proceed in Currambene Creek and only a highly modified basis at the most at Sussex Inlet.  This view is supported by the data in a report prepared by council and presented to Natural Resource Committees in September 2015.

A council report verifies that there is no need for sand dredging in Currambene Creek but work with the rock ledge at the entrance will proceed. That should represent a substantial savings given the Feasibility Study of 8000m3 at a cost of $439,000 for navigation dredging in the creek

The report also indicates that Sussex Inlet dredging will now only be in the channel opposite ‘The Haven’ for replenishment work at that site and possible use in Riviera Keys.  It is anticipated that the sand dredge quantity will be 2000m3 to 4000m3. That should also represent a significant savings given the Feasibility Study figures of 10,700m3 of sand at a cost of $597,700.

Mayor Gash is on record with the New Bush Telegraph late in 2015 as saying that ‘the dredging will go ahead’ despite the August flood event. Well fortunately things seemed to have changed, as they should.

There has been little or nothing said by way of information for the community by Mayor Gash or Councilor Pat White, who has shouldered much of the public face of the project.

The ‘elected council’ did receive and accept a petition from the Sussex Inlet community group “We Pledge Not To Dredge” [November 24 2015] and accepted the “reduced scope of the work” at Sussex Inlet whilst agreeing to proceed.

Councilors also wanted a briefing on the reduced scope of the works and the associated savings. The channels at Currambene Creek as well as Lake Conjola and Sussex Inlet were to be ‘monitored for infill rates’.

So savings are a key element to councilors in consideration of post-flood dredging, which they seem to accept has to be on a very different basis following the flood excavation.

It would be interesting to know what these savings will be.

Then there is the rather vague news item on local Shoalhaven radio 2ST on February 15 in which Pat White is reported as announcing that the “dredging work will begin at Sussex Inlet by the end of this week” and that “funding has been released for the works, which will be followed by dredging work at Lake Conjola and lake Currumbene(sic.) Council will set up an information centre at the site where residents and business owners can talk directly to the contractors and staff about the dredging works.”

Well Councilor White, exactly what dredging do you mean and what funding, grants or council money, has been released and how much money has been saved?

Perhaps she could take up some reading in prior editions of the New Bush Telegraph.

Clr. White must recognize that dredging is a ‘Shoalhaven-wide and High Impact’ matter and that the provisions of the Council’s Community Engagement policy are not being met.

The two sentence hit on the radio is as good as it has got by way of public information and that is simply not good enough.

As well, Natural Resource and Floodplain Committees, which include community members and last met in September 2015, have been collapsed pending the processing of applications from the community and approval by the ‘elected council’ at some unspecified time in the future, so that source of community participation is not possible. ■