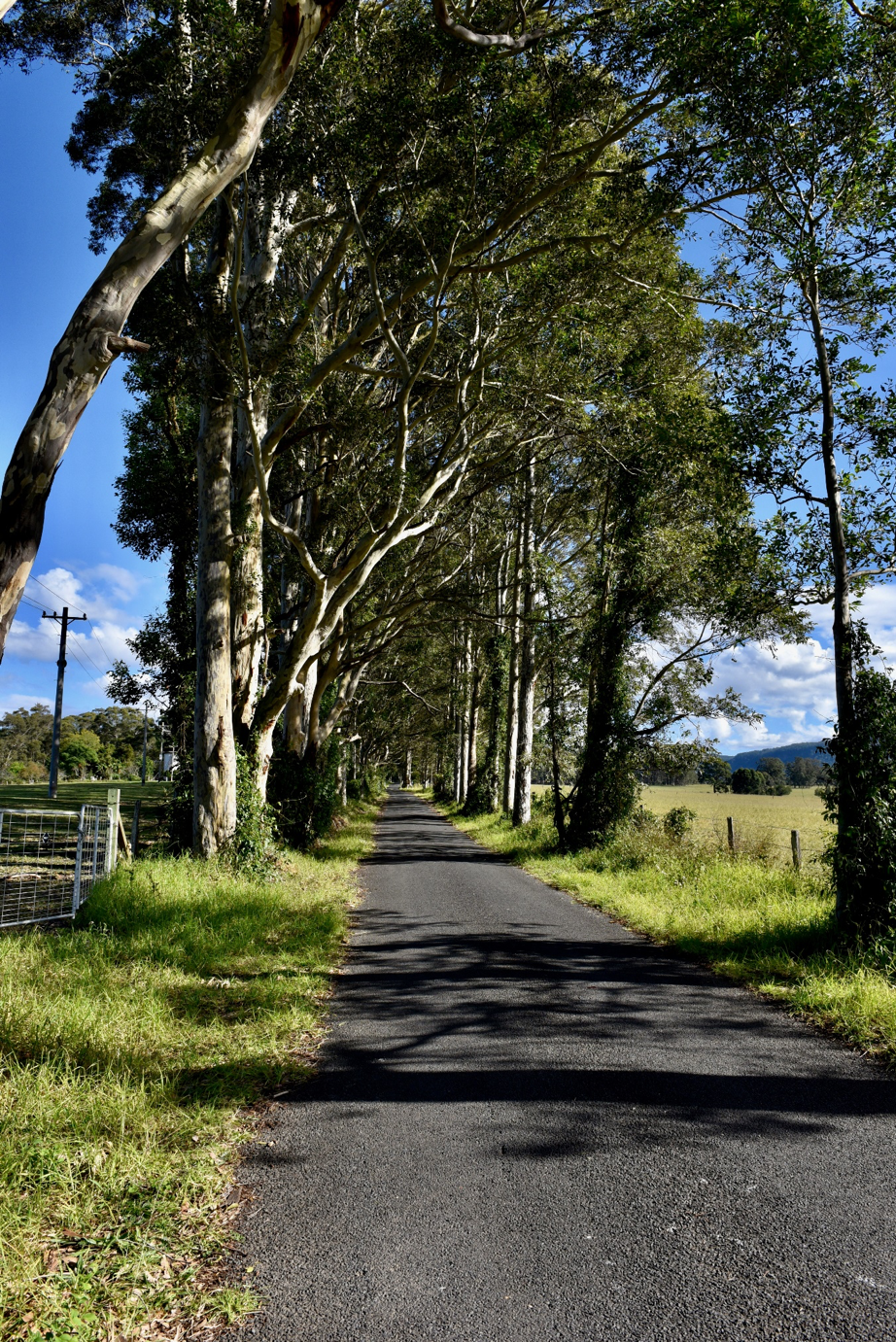 Taylors Lane, Battle of the Trees

There must be a better way to resolve community issues. Lip service consultation is insulting to the public and is a waste of process and rate-payer money. Surely council can work with the community to deliver a balanced plan with outcomes that take into account the safety and concerns of residents, wildlife and the environment.

Taylors Lane, Cambewarra is the subject of a dispute that has evolved between Council and residents. Disagreement centres around the widening of the small rural lane which forms part of an access road within the broader Far North Collector Road project.

Four options were originally identified and put to the community for consultation. The community consistently preferring Option 2 which is to widen the road to the north maintaining most of the trees, mainly Spotted Gums that canopy across the road. Council had first argued for Option 4 which would require the removal of most of the trees from both sides of the road - 317 healthy mature trees in all.

Back in May, Council had the numbers to push through Option 4, the option least preferred by the community. The community was strong in voicing its opposition, not wanting to see 300 trees destroyed. There have since been massive amounts of letters sent to Council, the community demanding to be heard and listened to.

A rescission motion was filed by Cllr’s Digiglio, Findley and Levett, but before that motion was heard, Cllr Wells introduced a new motion and presented an entirely new option as an alternative. Option 1a, was a compromise, only half the trees would be destroyed. What followed was a long debate, eventually won by the Independents, although in the process of debate, Option 4 was it seems taken off the table. A win at least for now. Cllr Digiglio immediately lodged a rescission motion against the decision, standing with the community and determined to support her constituents every step of the way.

“I have personally had a large number of representations on this issue and it just cannot be ignored.” Cllr Digiglio told me. “In fact, I have a moral responsibility as a Councillor to represent my constituents in Ward 1, to listen and explore opportunities for better outcomes for this community taking into consideration the concerns of the people that live there and those that value their environment. As a Councillor I believe it is imperative the community are heard regarding this issue.”

People all over the Shoalhaven are upset about the destruction of the environment during the Black Summer Fires where over 70 percent of the forests in the region were burnt out. The community witnessed these losses on a daily basis across the summer and while there is new regrowth, it is superficial and on very damaged forest stock. Worse of all has been the devastation of our wildlife. Coming out of lockdown, people are voicing a new appreciation of the limited remaining beauty.

“The community have had enough of tree lopping and tree clearing,” Cllr Digiglio said “especially given our Black Summer Fires where locals in Kangaroo Valley and Budgong are still recovering after the severe losses of homes, wildlife and trees. It is up to the community to flood their Councillors’ email boxes to express their views before Tuesday 23rd June, to reverse these badly made decisions and demand the community preferred Option 2.”

Local residents have said the council has not contacted them or adequately addressed any of the issues they raised in their submissions in support of Option 2, and against Option 4.

Cambewarra resident Carmel McCallum confirmed a microbat colony frequents the trees regulated for removal. “It is all very well for offsets to be offered but they don’t take into account that trees are being removed from one area and the proposed offsets will be planted at Bomaderry which is a long way away. We need to maintain vegetation corridors so wildlife can travel from one area to the next safely.”

Offset schemes can work in some circumstances but in this case, it is not the same ecology and gaps in the corridors would leave wildlife homeless with huge land breaks in between vegetated areas. The existing trees along Taylors Lane are rich with hollows, clearly supporting a lot of creatures to live there.

The Shoalhaven Community Strategic plan lists as its second priority environmental protection of a sustainable liveable environment. In the preamble it states what a beautiful natural place we live in and how we all need to place high value on our unique coastal rural landscapes, and yet we are chopping it down. Perhaps it should be mandatory for all Councillors to read and embody the strategic plan. Perhaps then there would be more respect for nature.

Taylor’s Lane is one of the last remaining country lanes in the area. These narrow treelined rural lanes, with their high leafy canopy arching lazily across the road, are few and far between these days, most gone to subdivision, roads, progress. Wedding Party’s flock the area on a weekend, a favourite spot for photographers to stop and record the perfect rural scene. Many believe the lane to be so unique and now so scarce that it should be heritage listed.

Taylors Lane residents have vowed to stand strong in maintaining the fight for Option 2. While many in council believe that Option 1a is a good compromise, around 150 trees would still be lost. In 2020, trees in the Shoalhaven have taken on a whole new meaning and the community is willing to fight for every single one.

To make a Deputation Submission to Council on this matter (closes 3pm Monday 21/6). https://shoalhaven.nsw.gov.au/My-Council/Council-meetings/Deputations-Council-Meetings?fbclid=IwAR3GCuf1qU7PClA7W7RJndKeYPn71tr2u9DuJj6N1eMwwYeo8cGTfo1S_U0

To email individual councillors with your viewpoints: https://shoalhaven.nsw.gov.au/My-Council/Councillors-Mayor

To email all councillors simultaneously allcouncillors@shoalhaven.nsw.gov.au

2 comments on “Taylors Lane, Battle of the Trees”