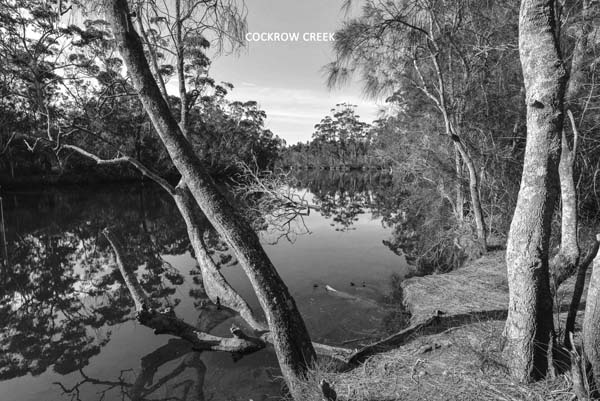 That word Bherwerre rings a bell! It is actually the Aboriginal name for St Georges Basin and the word first appeared on the first surveyor’s map of the Basin though as ‘Bherwherree’. The word also occurs in the naming of Bherwerre Peninsula and Bherwerre Beach.

This project is a biodiversity and passive recreation plan for an area of council owned land on Cockrow Creek and Larmer Avenue [see map].

The ‘Bherwerre Wetland’ is the name nominated from a local Sanctuary Point Aboriginal family as the one they have always used for the area of the floodplain delta of what is now Cockrow Creek-Tomerong Creek.

Locals are familiar with the area, as it exists now at least, as the readily flooded regenerating bushland on Larmer Avenue Sanctuary Point, opposite the athletics oval.

The land was purchased from Bunnerong Developments by Shoalhaven Council for $797,500 in October 2012 and has been retained as ‘Operational’ rather than ‘Community’ land.

Essentially this means Council is free to decide the use of the land, though in this case the projects clear intention is community based.

The land is clearly unsuitable for any further urban development because of the flooding and at this point Councilors who have attended Forum meetings and community workshops are supportive of the project.

The land is currently zoned to Rural 2 and a smaller portion of Environment Conservation 2.

There is a piece of, let’s call it ‘oral history’, which recounts the intention to turn the land into a canal estate in the 1970s and that it was this that led to dredging and straightening of the stream, which drains from the Country Club golf course, into an unnaturally straight watercourse.

THE COMMUNITY GETS INVOLVED

Following Basin Villages Forum calling Council’s attention to the site in October 2013, the Forum conducted a community workshop in February 2014 with Council staff to consider the community attitude to the prospects of the area being considered for development as a wetland sanctuary for passive recreation.

The overwhelmingly positive response to the idea and a further, similar workshop in 2015 verified community support and generated ideas for site projects for Council to consider.

By that time Council staff had been active in profiling the site and community support had generated a bird catalogue, native orchid list and a photographic catalogue.

All of this established environmental values beyond what were first realized, especially within the community.

The original vegetation was eucalypt forest community with a composite casuarina-wetland-saltmarsh-mangrove community on the southern margin with the Basin.

The swamp oak floodplain forest features on the margins of Cockrow Creek and the wetland and saltmarsh.

The threatened species Melaleuca biconvexa has been identified on the site and ten species of terrestrial orchid documented.

BirdLife Shoalhaven surveyed the site over twelve months and provided Council with a catalogue of 68 species including two threatened species.

Most importantly the native plants, especially the eucalypts, exhibit a significant capacity for regeneration from the prior clearing and damage, which is vital to the promotion of the site as a biodiversity project.

That has been impacted by a large degree of clearing for intended residential development and a more recent melaleuca regrowth response but the area exhibits excellent potential for regrowth.

The nature and extent of community participation, instigated from the Basin Villages Forum interest, progressed considerably in 2015 leading to the involvement of the Bay and Basin Community Resources [BBCR].

A workshop was conducted for BBCR personnel and councilors, which included an illustrated presentation, a guided walk on the wetlands site and a projects discussion session.

A Project Steering Committee, organized by BBCR, was subsequently formed act as a link between Council and the community.

This Committee has representatives from a number of interested local community groups. It has worked hard to come up with a series of potential ‘management actions’ for the site.

Where possible any paths/infrastructure would be built by local community groups (e.g. work for the dole program etc) and that this would provide a series of guaranteed funded projects for the BBCR to roll out.

Once the Steering Committee has finished developing its  draft plan, it will go to Council to gain approval for wider community consultation.   It’s very important that this project is owned and valued by the community.

Council has proposed from the initiation of the project that funding of the works and their maintenance would be by bio-banking.

Essentially, this is an ‘off-set’ type system, developed by the NSW government,  in which the costs of development are determined and divided into ‘credits’, each worth so much money.

These ‘Credits’ can then be sold on a market to developers or contractors who can then use these we credits to provide them with an off-set that allows them to remove a natural area for their development at their site.

Bio-banking, as with off-sets, is controversial. It is regarded as environmentally neutral as what is gained in conserving one area is lost in another where the off-set applies.

It would be fair to say that this has concerned a number of steering committee participants.

The committee continues to consider that the more external funding sources could be gained the less the impact of the bio-banking offset.

The attraction of bio-banking is that it does provide funding, so potentially the site could be developed and maintained with little or no cost to the ratepayers.

Now would they be the ratepayers of Shoalhaven Council or Kiahaven or Shoalhama Council ? ■