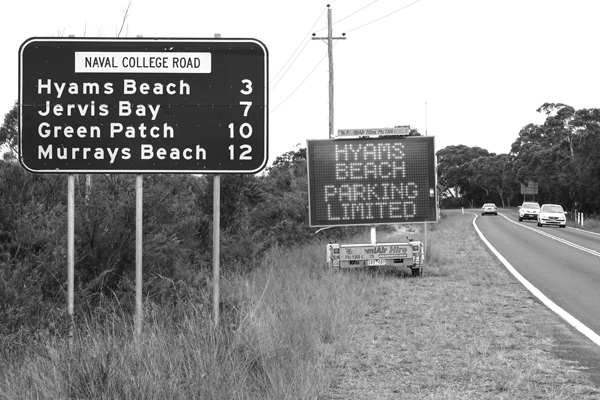 There can be no doubt that tourism is critical to the Shoalhaven economy.

It is worth a lot of money, in the order of $850 million annually based on 3.01 million visitors in latest reports and is a key employer providing 7400 jobs of one sort or another.

At the same time there has been no change at all in youth unemployment in the Shoalhaven.

There can be no doubt that questions relating to tolerances within tourism are being posed as they should be but it is the answers that are proving problematic.

The Tourism arm of council recently announced the development of a new tourism model, “Destination 360” but more of that in a moment.

A recent report to Council noted a 27% growth in international visitors for the ‘off-season’ [June, July, August]. Is this sustainable?

In February, Shoalhaven Tourism was highlighting “6% Sustained Positive Growth to 3.2 million Visitors” for the year to September 2016.

This sustained growth data, if indexed with 2014-15 as a base year, translates to 4.04 million visitors for 2019-2020, or a total increase of another 840,000 visitors.  Is that really what we want by this time in 2020?  These figures were not contradicted when presented to tourism staff at a council committee meeting.

That is simply not sustainable. Residents, the communities and the environment would buckle under that impost and there are incontrovertible signs of that already, particularly in some places and at certain times.

By the same token a lot of Shoalhaven Council money is expended on tourism related infrastructure and services in support of the industry with ratepayers footing the bill, which will grow with any excesses of tourism.

The big tourism development in recent months has been a move to a new model of tourism, “Destination 360”, by the Shoalhaven Tourism arm of council who have contracted the Newcastle consultant firm, Simon McArthur& Associates P L  to guide this with a report due in July 2018.

Perhaps this is fitting as 2017 is the United Nations ‘International Year of Sustainable Tourism for Development’.
The initial promotion of this from council staff was in terms of SUSTAINABLE TOURISM.  Now that sounded promising, even too good to be true, as a light years shift in philosophy in a key industry.

Was there now hope that tourism was not in danger of running amok in the Shoalhaven?

To cut a long story short what this really turned out to be was SUSTAINABLE TOURISM BUSINESS, i.e. a level of business in tourism that could be sustained.

That shows just how much the term “Sustainability” has come to be used and abused over recent decades.

In 1992 world leaders signed up to something called “sustainability”. Few of them were clear about what it meant; I suspect that many of them had no idea. Perhaps as a result, it did not take long for this concept to mutate into something subtly different: “sustainable development”. Then it made a short jump to another term: “sustainable growth”. And now, in the 2012 Earth Summit text that world leaders are about to adopt, it has subtly mutated once more: into “sustained growth”.

Throw into the mix the formation of a “Sustainable Futures” council committee with community representatives. The committee has actually resolved that they “commence a community education program for locals and tourists this summer” so there are links.

The purpose of this committee relates to matters such as emission targets, energy, environmentally sustainable living and business, ecological values, waste, challenges of climate change and renewable energy generation. It does sound like there is a strong link between the concept of ‘sustainable’ and environment.

Is it the same sustainable concept running in tourism minds?
Well, at least some council tourism staff don’t think so, having provided the view that Sustainable Tourism has been dropped in the development of the new model as “too confusing”. One wonders who is too confused?

The replacement looks to be “Healthy Tourism” though the sustainable concept lingers.

The U.N. concept of Sustainable Tourism is tourism that takes full account of its current and future economic, social and environmental impacts, addressing the needs of visitors, the industry, the environment and host communities.

What of the natural environment? It is being touted as a ‘pillar’ of tourism, the others being community, economy and experience though the U.N. identifies three: economic, social and environmental.

The optimal conditions for environment, as described by council’s consultant, exist when “Yield is maximized from key visitor markets”. Why does that sound incredibly contrary to what those with environmental interests might imagine?

Does it actually have anything to do with environment?

If you are confused then grapple with the notion, again provided by the consultant, that Healthy Tourism has the benchmark that the “majority of visitors experience the Grand Essence”!

Oh!  You have been watching ABC’s ‘Utopia’ so you understand?