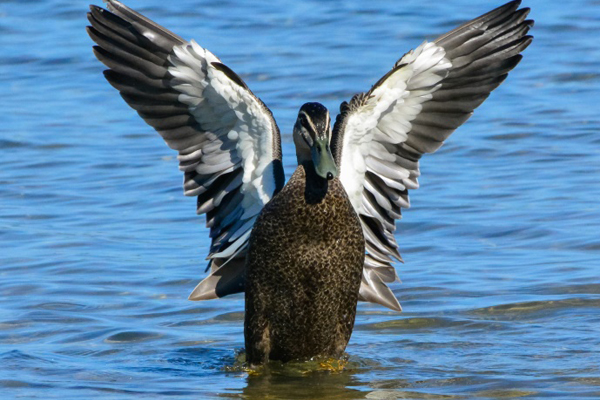 It symbolises a connection between people and their country and a commitment to care for the country handed down from generation to generation.

‘Country’ is a term that should be taken to mean all aspects of environment; land and waters, wildlife and birdlife and both the traditional, historic and contemporary association of these with Aboriginal peoples.

It is also a common thread which draws people together around an identity as south coast Aboriginal people.
In that sense it is a sacred bird associated with particular recognition through Dreaming stories and laws such as a ban on hunting that Umbarra and with a sacred site such as Merriman Island.

Umbarra as a symbol derives from a geographical or place association with “Merriman Island” in Wallaga Lake. Merriman Island when viewed from above, as from the sacred mountain Guluga, resembles and symbolizes the Pacific Black Duck or Umbarah.

The island name associates with a very significant Aboriginal identity, Merriman, for whom the Black Duck acted as a warning of dangers for both he and his people.