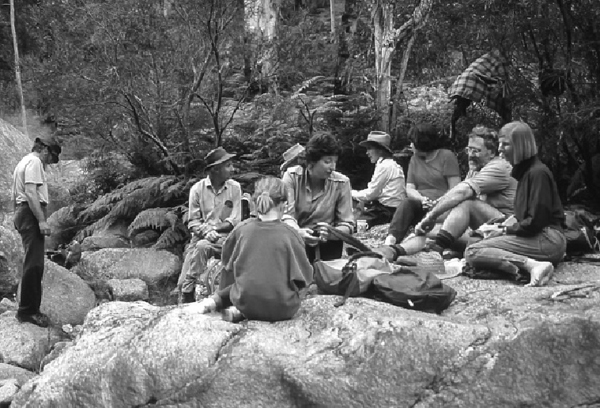 UNDERSTOREY – The South east Forests and the campaign to protect them

Every once in a very long while a gem of conservation media lights our lives. Such is David Gallan’s “UNDERSTOREY”, a film documentary and account of the grass roots, community movement, which was responsible for the conservation of so much of the South East Forests of NSW.

The story existed in old newspapers and television film archives, in the disparate sources of oral history of course, in the minds, hearts, memories, experiences, personal files of the many who were involved and for some, whose lives were immersed in the conservation battle at one time or another.

How could a movement that started in the late 1970s to battle the waste, destruction and ugliness of wood chipping, the fraud it was, and continued for so many years over so many key environments, be portrayed so that the telling touched that heartbeat?

It could have only been with the greatest difficulty of course and the challenge was enormous.

Telling the story with good faith and veracity, actually producing a film of the story, conveying and creating interest and wonder in the natural environment of these forest icons and acknowledging contributions of so many individuals through the film were all challenges.

David Gallan has confronted and conquered these challenges with the one a half hour film documentary that has moved names and places like Mimosa Rocks, Mumbulla, Biamanga, Tantawanaglo, Coolangubra and Towamba into environmental history and folklore in a much broader public space and time line than they have previously enjoyed.

The film was funded by David himself who accessed whatever equipment, photographic and film records were available.

This rich base is a very rewarding collage for the audio-visual stimulus of this film.

The contribution of film and expertise from Peter Constable is acknowledged.

There are a number of key, critical themes explored in the film. One is never enough in such conservation stories.

A central theme is the work, commitment and involvement of community activists and their groups but it is telling interviews supported by dramatic visuals with particular activists that conveys a graphic sense of the battle that was conservation of that time in the south-east forests.

A sense of personal history is conveyed by seeing them in much younger days in archival footage.

The story of the strategies and tactics adopted by the various people and groups in different places make for fascinating and compelling story telling as we witness public meetings, blockades, activist meetings, arrests, tree and pole sitting.

However two actions stand out in the telling. The first is the role of media in campaigning and the second the platform developed with direct involvement of professional scientists.

The forest environment itself, its beauty and value, had to be conveyed in ‘Understorey’ if the film was to be truly worthwhile.

That has been done in spades but considerable credit must be given to David Gallan for the film portrayal using photograph stills and live footage of native fauna, especially the birds of these forests.

The scenes of lyrebirds are very special but to mention the many others may spoil the experience.

An unrelenting theme of history is conveyed in the film as well.

There is a long and involved history in the conservation of the southeast forests built around places, people and politics and a sense of that comes through strongly.

The Yuin nation place in the story is acknowledged and the fight for cultural recognition involving Mumbulla and Biamanga in particular creates a broader story.

The 1980s were not a time for cultural recognition and acceptance in NSW communities and the conservationists who aligned themselves to Aboriginal people and their causes would be subject to derision, threat and abuse.

People who see the film should be taken by all these elements.

This review has not drawn individual names from the long, long list of conservationists ‘Understorey’ reveals but this is a critical and well-handled part of the film, which can be enjoyed with interest when it is seen.

If you count yourself as having a commitment to environment and conservation this film cannot be missed and if you have enjoyed the South East Forests the appreciation will grow enormously.
Understorey opened in Merimbula earlier in the year and had a highly successful and popular stint at the Narooma Kinema.  It is now headed to Canberra, Sydney, film festivals and, with some luck, to the Shoalhaven later in the year.

A DVD is available on-line from Candelo Books in Bega. ■