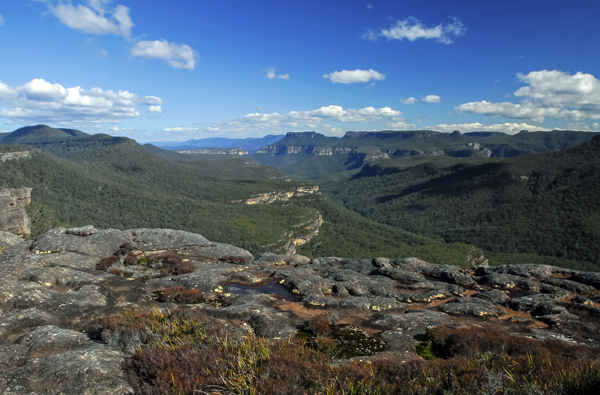 The National Parks and Wildlife Service (NPWS) will shortly complete a new risk analysis for the former Tianjara Artillery Training Area (TATA) in Morton National Park. The updated risk analysis is based on a recent unexploded ordnance (UXO) report commissioned by the Department of Defence that has redefined the boundaries of the area. The range is located west of Nowra adjacent to the old Post Town of Sassafras on Main Road 92 and surrounding the headwaters of the Clyde River. The landscape is made up of plateaux, deeply channeled by gorges and covered by swamps and forest.

In the early 1940s Australia was deeply engaged in WWII and the Defence Department were seeking additional land to be used for military training. In December 1942 an area in the coastal hinterland, Tianjara and Little Forest Plateaux and west of the Clyde Gorge, in all approximately 8,000 hectares was selected and leased as a Permissive Occupancy (P.O.) by the Commonwealth and taken over as the “Tianjara Artillery Training Area” (TATA).  Habitation was sparse, apart from settlement at Sassafras Mt. on the Pigeon House Range and in the south, east of the escarpment at Little Forest Parish. The lands on the plateaux were, diverse, extensive and isolated, uninhabited and uninhabitable. Without urban expansion, air curfews, within the P.O. area, this bleak rugged landscape was ideal. In 1943 there were few roads. Most of the landscape features were unnamed which enhanced the sense of isolation. A lease was taken for 16 years. In 1960 the lease was renewed for another twenty years and the lands extended further south to include almost another 4000 hectares.

In 1981 most of the land was taken from the military to be included into Morton National Park. The transition to public space occurred over a period. In 1968, it had been declared as a “Reserve for Public Recreation”, then progressively included into the Park in 1981-83. In 1996 it was declared under the Wilderness Act and included into the Budawang Wilderness.  These lands offered considerable opportunity for nature protection. The move to being declared as “Wilderness” provided the opportunity to introduce appropriate management of activities that would recognise the conservation values of the former artillery range and associated risks as a result of its past military history. The extent of Unexploded Ordnance (UXO) contamination was unknown to the public and has been the subject of discussion at various times over many years. And its management as public space has been largely based on scepticism from incomplete knowledge. At key stages during the transition to public space (1968- 1996) there had never been a complete audit of its 40 years as an artillery range or its residual UXO. And prior 2005 its suitability for use for public recreation appears never to have been questioned especially in the former training areas southern region.

The earliest known record of a dedicated impact area within the TATA appeared in Range Standing Orders 1971, covering an area of 4800 hectares in the north of the range surrounding  Mt. Tianjara. This first appeared on bushwalking maps in 1986 ie the George Elliott sketch map, and was promulgated by Defence as the only area of the former TATA as presenting a risk. It was the knowledge of UXO outside the Impact Area from its known discovery and from anecdotal comment that raised questions leading to the investigation of the TATA outlined in this chapter.

In 2007 a new management document, “The Budawangs Bushwalking and Camping Strategy” was released by NPWS to assist in better planning bushwalker activity and to reduce the impacts that had occurred over many years across the very popular, but sensitive Budawangs landscape. As this included the former artillery range, information was sought in 2005 from the Department of Defence to assist NPWS to develop an approach to its “Risk Management”. At the time it was concluded, that while no guarantees could be given, the area presenting the highest risk was the 4,800 hectare impact area around Mt. Tianjara. But the input from Defence left gaps in the information needed to correctly recognise and manage the risk. In 2011 the potential for UXO contamination to be more extensive than the 2005 advice was raised in the light of more recent information from former Defence service personnel. At that time, the National Unexploded Ordnance Office upheld their assertions of 2005.

Later in 2011 a private study was conducted by National Parks Association of NSW Park Management Committee, hopefully to provide greater insight into the use of area and assist with its future management. The report was called “Morton National Park and its Military Legacy at Tianjara”. There was no military expertise behind the study just members of the community with a concern for public safety and an interest in local history. It was though, the first study of its nature ever conducted into the use of the former TATA across its whole area and to consider the conflict between UXO contamination and recreation outside the expanded impact area identified in the NPWS 2007 Bushwalking and Camping Strategy.

In April 2012, for the first time the entire former range was identified by the Department of Defence as a contaminated site. The much needed change in direction was facilitated as the result of interest taken by the then Federal Member for Gilmore, Ms. Joanna Gash. For the first time this revealed the use of the entire area and the weapons used. In 2013, following years of concern expressed to NPWS a professional study and risk assessment was commissioned by the Department of Defence. For years it had constantly been asserted most of the artillery rounds fired had been delivered into the Impact Area (IA). This had been the primary source of information upon which NPWS developed their approach to management. The known existence of UXO outside the IA and anecdotal comment from former Defence service personnel and Sassafras residents gave rise for the need for use of Tianjara to be questioned.

These concerns have now been vindicated. The IA appears, not to have been delineated until probably 27 years into the life of the Range. Various official records reveal the entire range was required, and used at times for live firing of medium and long range artillery. Consequently the contamination of the land is now recognised to cover a vastly increased area of the former range. Even owners of private lands at Sassafras and Little Forest have been notified their lands, adjacent to the range may also present a risk. In addition to this the suspect area has been increased to 25,000 hectares, almost double the area of the original P.O.

The difficulty faced by managers now is, due to the nature of the terrain most of the land cannot be examined or cleared of UXO. If attempted, it would cause considerable environmental disturbance to protected lands and involve prohibitive cost with inconclusive results. According to the records Tianjara had no permanent range management and, information regarding firing activity has been destroyed so it is therefore impossible to quantify the extent of contamination in terms of location, type, stability or concentration.  Any attempt also to categorise the contamination will serve little practical purpose from the point of view of addressing public safety given the scarcity of detailed records. The fact is the entire area of Tianjara was used at times for artillery practice. There is now a need to step back from the earlier information of the past 9 years and recognise the potential risk and acknowledge the need for NPWS to now review the management of the entire former range, which is currently being undertaken.

Today, the costs of such a complete remediation would be prohibitive and, perhaps even unwarranted, as there are other similarly polluted areas throughout the country that are precedents. Instead, the public are warned of the history, specific tracks and trails remediated and they are advised to stay within those boundaries when it comes to recreation. Since the TATA risk assessment of 2005 and especially the last 5 years considerable public resources have been spent on targeted surveying for UXO and erecting signs to warn the public. But in past the emphasis has been on the north where until recently the main impacts and therefore the risks were considered to be. The current risk analysis is nearing completion and authorised management activities are under review because of the new information. The public will now be advised of the potential risk existing over the entire area of the former range. In addition NPWS management and fire fighting activities are being been modified to address risk to staff and fire fighters and other authorised agencies.

(This article has been extracted from a soon to be released detailed history of the former artillery range written by Robert Snedden local historical researcher and member of the Shoalhaven Historical Society). ■