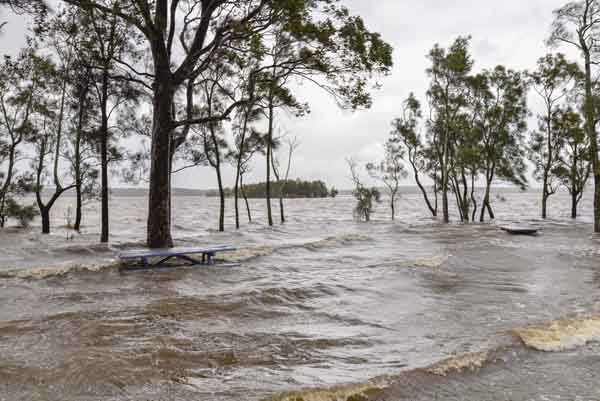 In August the Shoalhaven coast and hinterland experienced one of the most dangerous natural events of this part of the Australian coast - an “east coast low”.

It wasn’t the first and it will not be the last of course.  It was severe, arguably one of the worst ever but was notable for the intense rain and runoff, which brought significant flooding and damage to personal and public property and tested both the personal and public emergency response processes.

The Shoalhaven was declared a natural disaster zone  following the August weather event with the mayor noting that $400,000 had already been spent by the start of October and that restoration works would cost Council well over a million dollars.

Shoalhaven Heads and Sussex Inlet residents were most affected with flooding extensive around the St Georges Basin area.

Rainfall over a 24 hour period was 300-350mm though a Tomerong record noted 540mm and recording stations in that area had 461 and 435mm. At Sussex Inlet a record of 370mm for August was well above median rainfall but followed an April rainfall above the usual median rainfall.

This is to be measured against the prediction of falls of up to 200mm for the crucial 48 hour period.

Water levels in SGB at Island Point reached major flood level on August 26.  This co-incided with the highest  tide level of the five day period around August 26.

By an intriguing twist of fate this event has had huge implications for the ‘Shoalhaven Wide Dredging project’, particularly at Sussex Inlet and Currambene Creek.

The effect of the natural event is that it has forced a review of the Shoalhaven-wide dredging project.

The channel parameters the project was based on have changed very significantly.

A formal Council report prepared for a post-mortem on the event for community representatives in Council committees indicated that the flood associated erosion in the Sussex and Huskisson channels had removed substantial amounts of sand.

This report established that the flooding was not related to the purported need to dredge. The fact that dredging had not yet occurred had nothing to do with the extent and severity of flooding. The flooding was essentially of a magnitude and extent that was independent of dredging.

This was supported by one Councilor’s report that insurance assessors involved with the south coast offered the very same view.

The Shoalhaven Dredging Feasability Study [April 2014] nominated 7000m3 of sand to be dredged at Sussex Inlet with an allowance of a further 3000m3.

Assessment at the conclusion of the August flood event in St Georges Basin and Sussex Inlet has been reported by Council at a net loss of 100,000m3 of sand in the Sussex Inlet Channel, ten times greater than the projected dredging.

The amount to be dredged at Currambene Creek had been significantly revised but the flooding through Currambene Creek has completely negated the need for further dredging though the rock at the channel entrance still requires attention for improved navigation.

The flood through Currambene Creek removed a net 24,000m3 plus of sand.

The irony has been accentuated by the fact that many voices within the community had said to Council that nature itself would determine the fate of the dredging project.

In any case, the dredging project had been put on hold because the tenderers for the project would not be able to complete work before the summer vacation and this process would resume in 2016 whilst Council were forced to abandon the sand mining component of the Sussex Inlet operation under advice from the Office of Environment and Heritage.

Dredging surveys will need to be repeated.

There is then a huge financial implication to all this as there now appears no need to spend the monies set aside for the project.

Perhaps, just perhaps, the Shoalhaven have been fortunate in one sense that the east coast low-flooding event occurred before and not after the proposed dredging!

Council’s accounting team can put the figures to that for us.