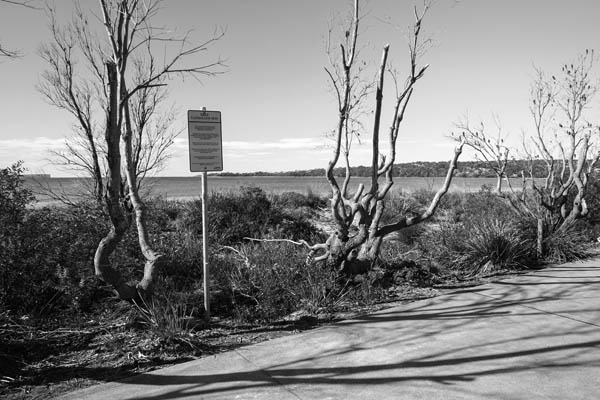 In 1978, Collingwood’s foreshore owners were planting trees.  Following a series of 1974/5 storms, some two thousand five hundred trees are reported to have been planted.  The storms attacked what had been left by the developers’ bulldozing – a fragile fragment of the dunal system.  The resulting damage to property was severe.  Ceilings collapsed on houses as windblown sand billowed in under eaves.  Reserves eroded.  Drift sand closed roads.  A local remembers seeing seaweed on Elizabeth Drive and it does not seem surprising that, despite the report of real estate values dropping dramatically (cautionary note to current owners), some people sold.  Plaques along the present cycleway show the engagement of Vincentia’s community in the rehabilitation work being done.

By 1986, success could literally be measured.  Collingwood Beach, which had been assessed as having an average width of 17m in 1975, had increased to 40m.  Also reported are the consequences of further storms and high winds.  In ’86 most sand drift caused by wind had been slowed by vegetation along the dunes and dropped in front of dune paddocks.  (Note: property values are reported to have increased significantly.)

An unrelated report (probably early ’90s) reveals that, by then, hard-learned lessons of leaving well enough alone were no longer shared along the Beach.  Responsible residents were calling for a public meeting to discuss the new threat of neighbourly (?) vandalism.  In the years since that call, a regime of cutting down, lopping and poisoning of dunal vegetation has become established along parts of Collingwood’s foreshore.  Construction of a cycleway brought to a wider public the evidence of its destructive insistence on a nonexistent right to clear the way for a private view.  A brief experiment with screening was tried by SCC but, with punitive measures difficult to enforce, little else has been done.  It seems to have been easier (if, admittedly, more urgent) to deal with the ruin resulting from weather than to deal with the actions of view obsessives.

In the effort now being undertaken by SCC to persuade persons unknown (“unknown” in the sense of “ . . . a reward has been offered for . . . ”) to cease and desist causing damage, Council seems to have come down on the side of the wrong threat.  Collingwood Beach is one of the three vulnerable coastal areas subject to the longer term considerations of Council’s consultants, Royal Haskoning DHV, in the preparation of a coastal erosion remediation project.  The other areas are Callala and Mollymook.  Consultants DHV note that NSW coastal legislation is being progressively reviewed and updated in light of predicted sea level rise and its implications for coastal hazards.  In its reporting, potential risks and associated remedial costs for both public and private property are assessed by DHV within time frames which could include present lifetimes.

Putting aside the puzzling question of ‘why employ consultants?’ it’s clear that for Council, the future, like the past, is another country and they did/will do things differently there.  For the immediate present an absurdly regulated, truncated, restricted density, species-deficient municipal garden – Burwood by the Beach – is to be imposed on one of the few sections of mature and healthy banksias left along the dunal barrier.  Designed for public viewing, to demonstrate the new landscape, it will stand as a floral tribute to the triumph of hope over experience.  (Note:  apologies to Burwood.)