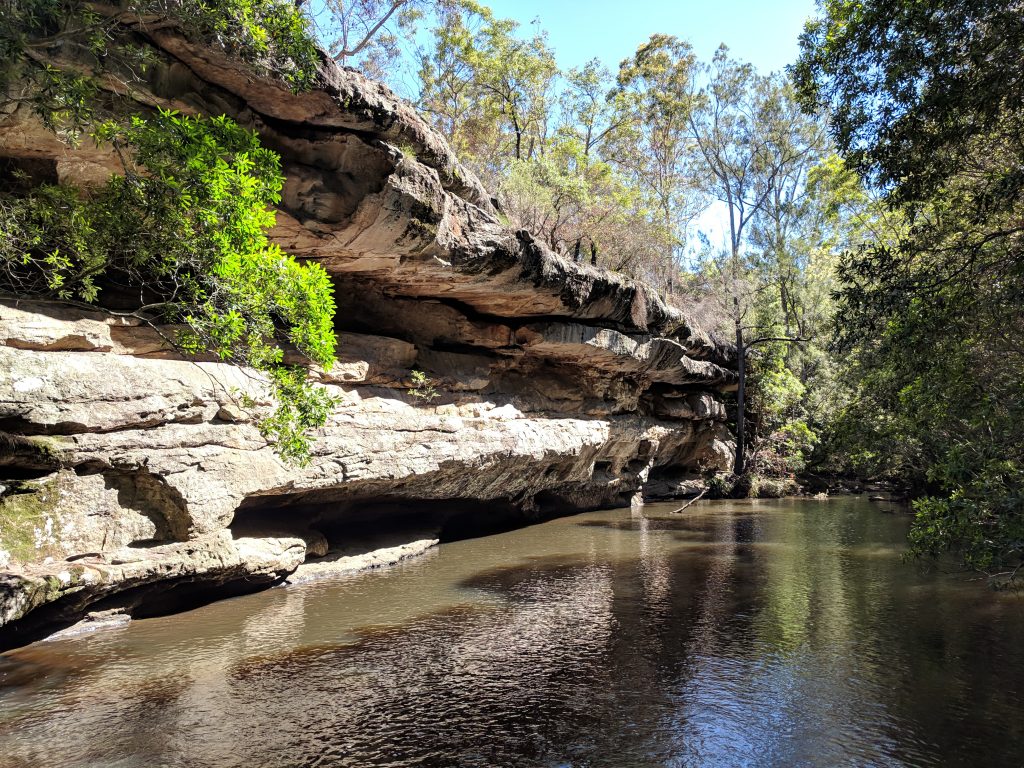 Bomaderry Creek – an Oasis Within Suburbia

Only minutes from the Princes Highway is one of the most picturesque nature areas in the Shoalhaven, a haven of beauty and a regional park that’s necessary to protect into the future.

Recently I had the opportunity to spend a day with local environmentalist Terry Barratt, during which I came to fully appreciate the environmental, community and indigenous significance of this area.

Bomaderry Creek Regional Park, located between Bomaderry and North Nowra, boasts tranquillity in abundance along the many walking trails, surrounded by natural wonders and rainforest, centre-pieced by the hidden gorge with distinct rock faces and fallen boulders, and with the background of running water as it travels peacefully down Bomaderry Creek.

Whilst there you can enjoy the birdlife, with honey-eaters feeding on the wildflowers during the spring, black cockatoos feeding on the casuarinas, and be treated by the sight of orchids growing from the rock crevices.

The junction of most of the short walking trails is the Bomaderry Creek Picnic area. Located at the former quarry it is a wonderful family friendly area with BBQ and amenities. The rainbow serpent mural and clay footprints tell the story of this area’s importance to the local Indigenous people – it offers a great place to relax and enjoy the aroma of the eucalypt trees.

The 250 hectares of regional park, containing many rare and threatened animal and plant species (such as the extremely rare and threatened Bomaderry Zieria - Zieria baeuerlenii - a shrub which grows nowhere else outside of Bomaderry Creek), is important for maintaining healthy biodiversity and the survival of these species.

A continual fight to preserve Bomaderry Creek commenced in the late 1980s when the Bomaderry Zieria, then considered as extinct, was located.

Shoalhaven City Council had plans for the North Nowra Link Road, which would run through the middle of the Zieria’s rediscovered location, and a new housing development within the park’s boundaries. This was the beginning of a 25-year battle to save this area of major significance.

An intense campaign starting in the early 1990s culminated in a court case favouring the community’s argument against the proposed road, which prompted, in 2002, the dedication of a third of the bushland as the Bomaderry Creek Regional Park.

Finally, in December 2012, the NSW Government’s Planning Assessment Commission ruled out Council's preferred option through the middle of the Park, instead approving the West Cambewarra Road route. However the fight against development continues to this day.

A history of lack of interest by local and state governments in protecting and restoring the Bushland, led local residents to form the Bomaderry Creek Landcare and Bushcare Group in 1994. This group has taken on the challenge of addressing past neglect and, more recently, regenerating the bushland after the bushfires.

Bomaderry Creek is a hidden gem amongst the growing population in such a development-heavy society. It is not only significant for biodiversity but also for the community. This oasis of nature is there for everyone to enjoy and, being a regional park, you can even take the family dog, as long as it’s kept on a leash and you stay on the walking trails. If you would like more information on becoming involved, then contact the Friends of Bomaderry Creek community group.

The reserve Bomaderry Creek contains several sites of importance to its original inhabitants, evidence of Aboriginal heritage such as rock shelters and axe-grinding grooves are found in the park. The shade, shelter and abundance of fresh water and fish this unique place offered provided a welcoming environment for its dwellers. Archaeological evidence and sites across the gorge country indicate that for the last 2000 years the park saw a diversity of use, for seasonal food gathering and possibly for ceremonial and social activity.

2 comments on “Bomaderry Creek – an Oasis Within Suburbia”