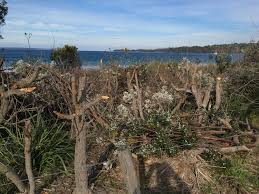 It’s a sore that continues to fester, the itch that can’t be scratched, the saga that never ends. The decade-long issue of vegetation vandalism at Collingwood Beach is still sucking time, energy and money from Shoalhaven Council and community members – all while vandalism on the dune has reached a shameful extent. Worse, the repercussions of Collingwood are affecting the entire Shoalhaven by blinding some Councillors to a bigger picture that they’re supposed to be managing: vegetation vandalism throughout the Shoalhaven.

In case you can’t remember, or have chosen to push the issue away out of frustration, irritation or fatigue (some definitely have), it’s worth a recap as to how we got here. In late 2016, Shoalhaven Council sought public feedback on plans to lop vegetation along Collingwood dune – an area of public (Crown) land. This was to end the vandalism by essentially doing what the vandalism had aimed to do all along: remove tall vegetation for unfettered views in several zones.

This was strongly opposed through the consultation. Two petitions were presented in opposition, one of 1500 signatures, the other of 946. Of seven submissions from community groups, all but one strongly opposed the plans. Three government agencies (the Office of Environment and Heritage, OEH, Department of Primary Industries and Department of Lands) opposed the plans, and 511 individual submissions were received. Of the 520 submissions, 74% opposed lopping the dune vegetation.

The plans were developed under Mayor Gash, but by the time Council met to consider the community response, a new council had been elected. Collingwood likely had a bearing on the election as the new Mayor and Greens Councillors were (and still are) vocal opponents of the vandalism.

When the results of the consultation were discussed, Councillor Proudfoot spoke of the palpable anger the community directed towards Council over the issue. He’s right on this, people were very angry - and many still are as the vandalism worsens. Councillor Proudfoot moved a motion that a new restoration plan be developed for the dune, amended by the new Mayor to be supported by a strong vegetation vandalism policy to bring a consistent approach to vandalism city-wide.

To summarise: the motion moved by Councillor Proudfoot and passed by Council in response to the public consultation called for another revegetation plan and a strong Shoalhaven-wide vandalism policy.

A ‘reference group’ was then set up to oversee dune restoration. In the spirit of compromise, on the understanding that Council was acting in good faith on the public wishes so clearly expressed, the vandalism signs were taken down and restoration works began – some of which were carried out by kids from Vincentia Public School.

Throughout this entire time, vegetation vandalism has continued unabated – just look at the recent poisoning of four mature banksias along the track. Still the community stuck by the reference group process and waited for the vandalism policy that would enable Council to finally tackle the issue – not only on Collingwood, but in other areas where vandalism is a growing problem.

The vandalism policy – modelled on policies from other Local Government Areas - finally arrived and was presented to Council on 5th March 2019. It was quickly neutered by the Councillor grouping called the ‘Shoalhaven Independents’ who voted to receive the policy for information, and to ‘workshop’ it further.

So where we’ve got to after 2.5 years of so-called ‘public consultation’, thousands of staff and community hours and likely $100,000+ of rates spent, is to a place where the vandalism signs are down on Collingwood, vandalism is occurring in many other locations around the Shoalhaven and Council has no strategy to tackle it. Neatly done!

What’s the bet the vandalism policy ‘workshop’ process, due to commence in late April, either ends up with a rubbish policy or is circumvented again by Council in the future?

The problem is, by failing to tackle this issue, we’re shooting ourselves in the foot. Besides contributing to the natural beauty and supporting the wildlife that we share our place with, the loss of trees and bushland chips away at one of our most cost-effective defences to extreme heat. In an era of simultaneous wildlife and climate crises, we should be doing all we can to protect and restore vegetation, not facilitate its removal. A robust vandalism policy is one important step to achieve this.