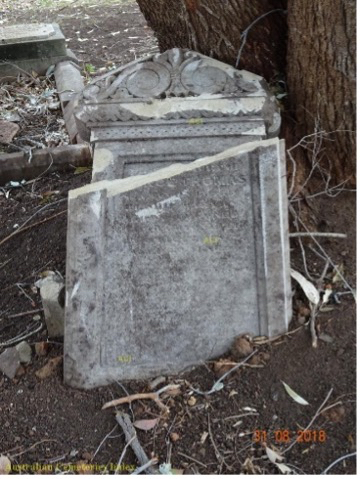 In February 2021 a Conservation Management Plan was completed for the Berry General Cemetery Historic Section on Kangaroo Valley Road by two members of the Berry & District Historical Society.

Prior to this June Robson, a long-time member of the Historical Society, had written a booklet on the Cemetery called Grave Misconceptions: A History of the Cemetery in the Country Town of Berry, NSW.

The Historic Section of this Cemetery has for a long time been neglected, as the other twenty cemeteries in the Shoalhaven have probably been.  This is due in large part to how the Shoalhaven Bereavement Services has been set up.

They earn money through burials, cremations and plaques, etc., but they are given very little money from the Council and as a consequence the historic cemeteries are not well maintained.

Another problem is that in New South Wales, according to the law, one cannot touch the headstone or any structure of the grave, unless you are a relative and have signed a Statutory Declaration, and provided proof in the form of a family tree to show that you are.

The form is called Claiming the right to give instruction over the grave. It can be obtained from the Shoalhaven Bereavement Services. You are, however, allowed to remove branches, twigs, leaves and seedlings from around the grave, but not touch the grave itself.

One person so far, who has a number of relatives buried in the Old Section, has filled in and signed the forms.

This makes forming a Friends group for a cemetery difficult. We have tried to form a working bee schedule with the Friends of the Berry Cemetery, but many of the Friends have been turned off because they cannot do anything about tidying up the actual graves.

Many of the beautiful plinths, statues, lettering and wrought iron fences are badly in need of conservation, but nothing can be done unless the forms have been filled in and signed. Funds need to be raised and grants applied for in order to get a stonemason to do the conservation work on the graves.

So, these are the reasons for our ‘Grave Concerns’ about the historic cemeteries within the Shoalhaven sinking further into disrepair.

If you want to do something about your Historic Cemetery, form a Friends group and get one member to sign the forms, so that you can get started with conserving the graves of their forebears. Stonescene, Mudgee are stonemasons who have a mobile unit that is prepared to travel anywhere.

The good news is that a sign about the Historic Section of the Berry Cemetery is to be installed with a small ceremony in the next few weeks.