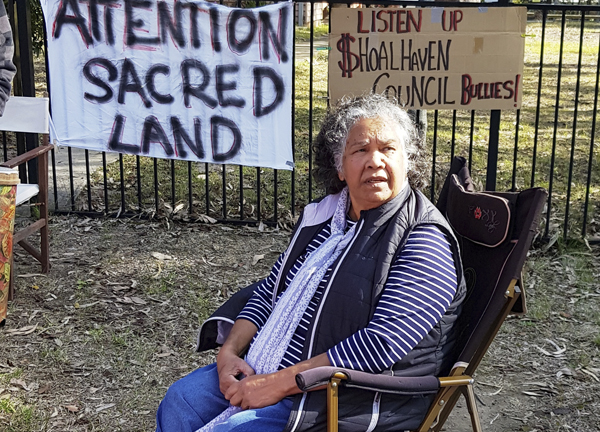 The demolition team has removed the old church hall on the site of the Holy Trinity Church in Huskisson. This was once the original church and probably the oldest building in Huskisson. Indigenous members of our community say it was used as a ration shed back in the day, where government handouts of food and blankets took place. There has been insufficient research done for anyone to really know enough about its history.

This is the shocking story of the Shoalhaven Council’s attitude to this much-loved Huskisson iconic block with its lovely little Cyril Blacket designed wooden church, beautiful stand of trees and heritage of unmarked graves. It is being trashed with the approval of a local government that has not commissioned any independent studies and held no community meetings. Locals and plenty of people who visit as tourists have made their anger known through many letters and submissions to the Council. A petition of almost 3,000 signatures was ignored.

The next thing planned by the developer, Mr. Steve Bartlett, owner of the Husky pub, is to move the Blacket church across the site. By the time you read this it may have been moved. Originally he was going to demolish this too, but as a sop to the community he later offered to move it ‘temporarily’. Some concession…not. The purpose of this is simply to reduce its heritage value and upset the local community. Its final resting place will be who knows where? We think the best place for it is right where it is, on the corner of this lovely site.

This whole exercise is received cynically by anyone who understands the heritage values of this place. One of the official measures of heritage significance is community esteem. As Graham Quint, Conservation Director of the National Trust explains: ‘This is the essence of heritage significance – that a significant section of the community values a place and wishes it to be conserved for future generations. Any assertion that it (the Huskisson church property) does not have, or fails to meet a ‘threshold‘ of significance is patently a denial of the facts.’

All this is causing great distress to the Aboriginal people whose ancestors are buried there as movements of machinery on site will potentially disturb graves. Local elders Jean Carter and George Brown from Wreck Bay have addressed Council, Aboriginal people attend meetings and protests. The request from the Jerinja Land Council for time to investigate and consult with descendants of people buried in the graveyard has been ignored. If the planned development for this site of a conference centre, pub, commercial buildings goes ahead, distress will be ongoing. Gravesites have been desecrated in many places, but the sins of the fathers do not justify ongoing insensitive desecration. Precious natural habitat is inevitably a victim of urban development, but it is difficult to fathom why this particularly loved place needs to be trashed.

Except that it isn’t difficult at all. It’s all about the dollar – the big dollars the Anglican church and the developer hope to reap from land that was granted, free of charge, for ‘public purposes’ (that what the Government Gazette called it) back in the nineteenth century. And they are being assisted all the way by the mindless majority on our local Council.
Community opposition to all this just grows stronger and to those who think it is all a done deal, think again. There are planning hurdles and zoning issues to be negotiated and the community will stand up for what is right all the way. The recently formed Huskisson Heritage Association gained over 100 members in its first weeks. Peaceful demonstrations outside the church are ongoing.

How Council voted on the Husky Church issue: