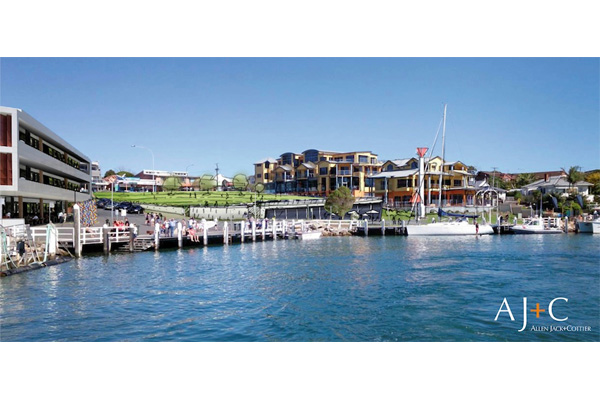 Heart of Huskisson is an alliance of three main stakeholder groups in the Huskisson and Jervis Bay region: Jervis Bay Tourism, Huskisson Woollamia Community Voice and Huskisson Chamber of Commerce. Between us we represent residents and ratepayers, the town’s many businesses and around 150 tourism operators.

For nearly two years we have been lobbying to save the iconic view across the block and bring the land area into public ownership, so the view can continue to be a draw-card for visitors and become a hub for residents.

To help persuade Council to buy the block, we had to compromise many people’s hopes that the car-park could be transformed into a simple park, so we agreed to include a commercial activity element to raise revenue and generate income. During the campaign in early 2015, we were contacted by many professionals offering to donate their expertise and we were amazed when a hugely successful Sydney architecture firm offered to help us devise a solution, and draw up images for us to use to illustrate our concept – all for no payment.

These inventive ideas sadly fell on deaf ears when it came to the Council’s consultants and planning staff.  Although the community reference group did raise our ‘amphitheatre with commerce under’ plan, it took a lot of work to get ‘option 1a’, which is closest to the community’s wishes, kept on the table at all. Compromises meant that the rake (slope) down towards the wharf and the culture and income generating amphitheatre idea was lost. The green roof element was largely dismissed as unfeasible - without taking on our research.

A number of times the consultant suggested that 1a should be dropped for 1b on its own, (which has a ‘transparent pavilion’ running all the way along Owen Street east west), but the group was unanimous in insisting that 1a be kept in, as the only option with nothing at all built above Owen Street level. A few of the community group felt that a one-story pavilion running north south not east west (along the front of the Cerulli ‘yellow building’) might be acceptable as that orientation had been created in the workshops, but that request was denied, and so the option 1b went out to public consultation with a building blocking the view! Even a glass building is a building.

The other two options didn’t really come out of the community workshops – and our feeling is that they were introduced specifically ‘to test the resolve of the community’. Option 3, building out the block entirely, is really the same as current zoning and the reason we started this campaign! It was made clear that discussions in the community reference group should be confidential while they were current, so we have not been able to be public about our misgivings with the process until now.

A few people have wondered openly about why we care about this block of land so much but it is simple really:

The space, sunlight and views at the heart of town gives Huskisson a unique edge that helps towards our success as an outdoor café destination too. Our main street has a special character that would be lost if the block and views were to be built out.

From a resident’s perspective that block of land has been ear-marked as a town plaza or village green for at least two decades! Council has nearly bought it numerous times for this purpose.

It is our natural heart and is begging to be used to its full potential.

We all agree that Huskisson is unique and that is the reason we love to live here and visit the place. Let’s hope that the current and new councillors who are hoping to be elected – all of whom will be tasked with this momentous decision – chose to listen to the community. Some candidates are actively campaigning on this issue, as they know how passionate the community is – and just how many votes there are in it.