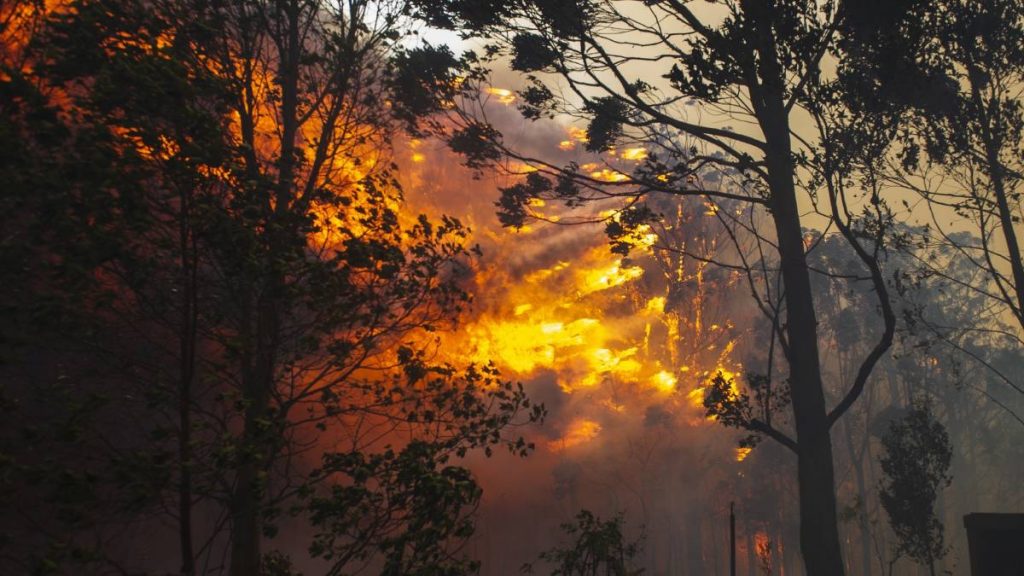 NSW Rural Fire Service Commissioner Rob Rogers and Fire and Rescue NSW Commissioner Paul Baxter have officially launched the $2m ‘How fireproof is your plan?’ campaign at the start of the 2020/21 Bush Fire Danger Period (BFDP).

The campaign has been developed by the NSW Rural Fire Service (RFS), featuring people who lost their homes last season telling their experiences so that others can learn ahead of this season.

One of the people who feature heavily in the campaign is Bateman’s Bay local Jim Hughes.

Jim is a school bus driver who had just completed renovations on his house where he lived with his daughter Raeden when the fire struck. In a heartbreaking TV advert Jim reflects on how he wished he had done more to get ready.

I met Jim and Raeden in January when I was reporting on the fires. They were staying at Burrill Lake on an already booked holiday with friends when I caught up with them.

At the time we met the fires were far from over, smoke filled the air around us, huge winds gusted even more strongly and truck after truck, sirens blazing, crews raced south as backup. I had counted maybe 30 trucks on my drive from Bateman’s Bay and the signage placed them coming from Sydney, the north coast, even interstate.

Jim took at least three calls from worried friends during my visit, advising them of what to do now their turn had come to fight off the fire as it approached their homes.

I listened as Jim told me that when he woke on that dreadful Tuesday morning the fire was only five kilometres away. He called his boss to let him know he wouldn’t be at work. Putting out the call, a crew turned up to help Jim - his neighbour, his dad, his mate that lives in the granny flat, and another guy Mark. Everyone else in the street had left by 7 am. The five of them managed to save three of the five properties in Gannet Place that morning, Jim’s home was one of the ones lost.

“After doing a quick clean up, we prepped as best we could. Set up buckets, rubbish bins, filled sinks. By 11 am it was at the back door. At first, we thought we had stopped it in the bush, and we were happy with that. But with all the smoke we didn’t realise it had come down through the gully behind us and up through Albatross Road. It snuck up on the right-hand flank”.

Once it got into the bottom house where the guy had been hoarding pallets to do timber work, that was it, unfortunately; not enough bodies on the ground, not enough water, RFS resources stretched. A tanker did arrive but by that stage, Jim’s house was gutted. He had hoped they could have saved old Kath’s house across the way; she’d been there 36 years but hers was gone too.

“So, from 6 am getting a message on your phone, by 11.30 am everything was gone. It was a tough day. Poor Raeden watching from her mums place at Surf Beach, worrying about her dad.”

After he realised the fight was lost, Jim stood on the corner and filmed his house go down. Then after checking in with his daughter, secured a couch to sleep on, and spent the next three days walking around in a daze, barefooted and still wearing the same singlet and board shorts, two things he had thought to grab at the last minute. He forgot to eat for three days, before turning up at the evacuation centre and accepting some charity, something us Aussies aren’t so good at.

Jim wrote a poem the day his home burnt down. He told me it was the only poem he had ever written. He wrote it as a way of dealing with the experience of the fires and losing his home.  Since then he has written plenty more and his daughter has written some too.

The poem, simply put, spoke not only his own story, but that of everyone in the community who lived through the Black Summer fires.

Fire chiefs are expecting to see an increase of threat from grass fires due to wetter and warmer than average conditions, the RFS and farmers are working together to better protect farming communities. Grass fires can spread quickly across large distances – three times faster than a bush fire, wiping out entire farms in an instance.

The Black Summer fires saw fire balls two metres high roaring across paddocks on an inch of grass fuel. Many compared what they witnessed to a freight train in both strength and noise.

Latest data shows above average levels of soil moisture at the end of winter, particularly in central and northern cropping regions in NSW but also across the south coast across the fertile Bega Valley.  This together with favourable spring rainfall will likely result in significantly above average winter crop yields. 2020-21 alone is expected to more than double that of the 2019-20 harvest.

Minister for Police and Emergency Services David Elliott said partnerships with farmers  would be important for firefighting operations.

“Improving communications between farmers and firefighters on firegrounds is an immediate focus ahead of this fire season,” he said. “This is critical to ensuring that firefighters and farmers are working effectively and safely to protect life and property.”

He said that while this year will not be as extreme as last year, people still need to be very careful when using fire and observe the rules around total fire ban days. The rain has brought its own problems with increased pasture growth, the vegetation becomes a fire risk.  As the grass dries out there’s a very real potential for fires later in the season.

“Our new public awareness campaign this year features personal accounts from people who lost their homes in last year’s devastating bush fires. People need to understand the risk and prepare for it – and do it now. You can never be too prepared,” he said. “By taking the simple steps you can prepare your property – for example, removing flammable materials from their yards, clearing leaves from gutters, checking hoses can reach all around the house.

Now is the time to start preparing

Shoalhaven Mayor Amanda Findley says she does not have to remind residents that the 2019/20 bushfire season was the most devastating bushfire season in NSW history; and a stark reminder of the danger of fire. She also encouraged everyone to be prepared and have a plan.

"As we begin our next fire season, with the previous season's impacts still being felt across NSW, communities are understandably eager to know more about getting ready.” Mayor Findley said.

Commissioner Rogers believes the single most important thing every family can do is have that five-minute conversation about important decisions like when to leave and what to take if a fire threatens your home.

Last season, with 26 people killed and more than 2,000 homes destroyed across NSW, we know that being properly prepared and knowing when to leave are crucial factors.

Fire and Rescue Commissioner Paul Baxter said it was important to never leave a fire unattended. “If a fire does escape, it is essential to call Triple Zero (000) immediately so that emergency services can respond accordingly and minimise the damage,” he said.

Commissioner Baxter also urged people to consider the risk of bush fires when traveling around the State. “As we move into summer and the holiday period, and especially given the travel restrictions with COVID-19, many people will be visiting bushfire prone areas. While they might not typically live in an at-risk area, it’s important they have a plan for the area they are visiting,” he added.

During the BFDP anyone wishing to light a fire for pile burning or hazard reduction will require a permit, which is free to obtain from your local Fire Control Centre. On days of Total Fire Ban all fire permits are automatically revoked.

Lessons from the Black Summer fires

There are many lessons to be learnt from last summer’s extreme fires and the drought conditions that are expected to disrupt our climate patterns into the future. Many are criticising the NSW independent enquiry recommendations as not going far enough; but are waiting for the Royal Commission report due out later this month, holding hopes of better protocols and outcomes.

The Berejiklian Government has announced funding for 100 new ranger positions for National Parks and Wildlife to make up for the positions lost in the 2016 state budget. However, insiders say this in itself is inadequate as more ranger positions were needed prior to the 2016 cuts; and even more now with extreme fire conditions expected into the future.

Windows of opportunity for hazard reduction burns are becoming smaller and rangers should not feel pressured to conduct burns in unsuitable conditions due to staffing shortages. The level of expertise and local knowledge lost during the 2016 ranger position cuts will also leave a huge gap.

One thing we all have learnt, that doesn’t need a report or an enquiry to tell us, is that we can all be better prepared. And we can always do more. With some programs delivering maintenance support to the aged and disability sector now suspended due to Covid, a neighbourly lending hand is always welcomed.

Fire safe resources - check the Fire Danger Ratings for your area; how fireproof your bush fire plan is; and a range of guides and tools for farmers.