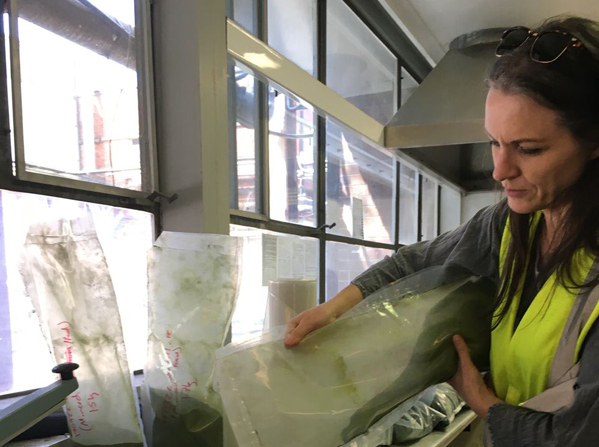 Pia Windberg is a powerhouse - dedicated, inspired and most importantly inspiring. A very qualified marine scientist, firing away in the food and nutrition industry; partnering, learning, presenting; making changes that will benefit our planet.

Pia Windberg started her studies on seaweed 20 years ago in Stockholm Sweden.  Although born in Sweden, Pia’s family immigrated to Australia when she was four, growing up in Sydney’s beach side suburbs. It was here, snorkelling in the then pristine waters, full of interesting life, sea creatures, seaweeds, that her love for the natural world and science formed.

Pia moved back to Sweden when she was 18. “I met my husband there, had children there, did my under graduate and master’s degree there, I was in Sweden 15 years. Then after our daughters, Saskia and Felicia, were born, Anders and I said, wow, it’s cold changing nappies at minus 10 degrees when you’re out with the pram. Anders had been a professional snowboarder, and he loved the idea of surfing, so we said hmm Mollymook looks good. Then we came to explore and went wow, what a great place to live.”

“We didn’t know what we could do, and thought we would have to work in the local supermarket, I thought I would be the best seafood salesperson ever. My husband was an economist, and he managed to keep his job with the Swedish Department of Education, so from his beach office he produces international school performance reports. I was able to get a PhD scholarship through the University of Wollongong and did research at Jervis Bay Marine Park.”

During that time in Jervis Bay, Pia was still keeping her eye on the seaweed and sustainable aquaculture, knowing that it was important to take the knowledge out of the university and apply it in a meaningful way. While her ultimate focus is on seaweeds carbon capturing ability and remediation projects, she is also a realist, knowing that the world may not be ready just yet for that application.

The more seaweed products that can be embraced and regularly consumed, (food, cosmetics, medical grade supplements and more) the more seaweed is grown, and the more carbon is captured, without having to sell anyone on the environmental benefits, sustainability or attracting its own funding.

“Manildra is actually a wheat refinery, but because there is so much wheat and wheat products processed there, just washing down and the waste streams from that, are just so big, that there is enough to ferment to ethanol. There is too much to compost so the best way to process it is to turn it into ethanol which is a biofuel.”

The natural waste from the wheat production is fermented into ethanol, then the nutrient rich water is used to farm the seaweed, capturing the carbon dioxide from that industry. As the seaweed production increases over time, Pia hopes to be able to capture all of the carbon from Manildra. The waste produced by the seaweed farm is clean water and oxygen.

More seaweed varieties are found on the south coast than anywhere in the world, with a native green sea lettuce variety being favoured for both its high soluble dietary fibre levels and its responsiveness to land based growing. At the Shoalhaven site, 100 tonnes per hectare is being produced per year which is 20 times more productive than wheat, and has the added advantage of capturing carbon.

“The types of seaweed we grow are smaller and they are green. It grows better and faster in tumbling pools, we can feed them whatever we want, not just at the mercy of what the ocean brings in and it’s purer in its culture, and provides the optimum protein and nutrient levels.”

Pia Windberg has emerged as a global expert in the area of seaweed, with her lead being recognised and taken particularly in Australia with our abundance coastline rich with valuable seaweed, and our chefs are eager to embrace the salty earth tones into their recipes and daily offerings. The whole area, however, is still in its breakthrough stage and more investment, education and marketing is needed to develop the market further.

Partnering with local manufacturers of cosmetics and skin care has begun, but with medical grade seaweed extracts the application potential is far more broad. “It’s not just skin creams for nourishment, we are actually looking at some pretty interesting biotechnology and tissue regeneration. Seaweed is similar to our own connective tissue, and cells love it. We are building these 3D scaffolds at the University of Wollongong that skin cells actually attach to and grow, and there’s not many natural materials like that, which skin cells will actually attach to. It’s a really exciting frontier of tissue regeneration for printing new tissue. We’re not going to sell these products tomorrow but there’s great opportunity in wound healing and making implants that work better in the human body and things like that.”

The potential is huge - diseases reversed through finding the right bacteria in the gut, and healing the disorder from the inside by changing gut flora; knee injections to prevent osteoarthritis, alleviate injury and to make body parts.

While the medical side is still in development, much of Pia’s seaweed food range is now available in limited supply - including Phetticine, Phukka and  SeaC’s); cosmetics and skin care are being developed with local Shoalhaven partners; and medical grade supplements are being tested in clinical trials.

Everywhere she goes her products receive applause and acclaim. Keep an eye out for Pia Windberg and her companies Venus Shell Systems and Phyco Health Seaweed Science, she may just end up saving the world.