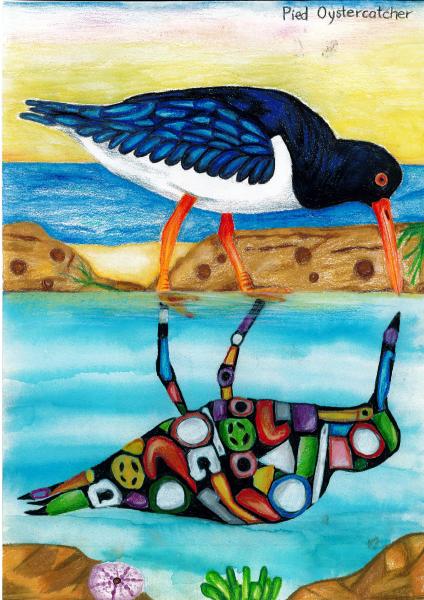 The Little Things That Count

Words and photos by Chris Grounds

We are all so involved nowadays in the big picture issues, thrown at us relentlessly each day in all media and journals, that engagements and attachments to natural environment that sustain and engage us can slip away.

The Pied Oystercatcher (POC) [Haematopus longirostris] is an endangered and threatened species in NSW and on the Shoalhaven coast. As such, it is at ‘very high risk of extinction in the near future’.

A team of some 100 volunteers work with supervisor Jodi Dunn in the National Parks and Wildlife Service’s Recovery Project involving this and a small number of other shorebirds on the local coast.

The September equinox heralds the POC breeding season for these handsome shorebirds.

Challenges from both nature and people, often in combination, accentuate the usual risk to breeding success and the POCs can struggle at times.

The breeding season involves a small depression in the beach, spit or dune sand, a clutch of two or three eggs incubated for thirty days, hatching and a six-week journey to fledging and flight.

Four warm seasons ago a pair of POCs set up ‘breeding camp’ along the Booderee shore of Jervis Bay. Booderee was handed back to Aboriginal ownership in 1995 and the National Park declared just a few years later.

Success evaded them at first, losing an advanced chick at Greenpatch close to Christmas in 2016.

In the next season, the summer of 2017-18, they produced one chick and remarkably marched that tiny, days-old bird, two kilometres from Greenpatch, where people pressure was simply intolerable, to Hole in the Wall. This chick was successfully reared there. The next season of 2018-19 a second nest at Hole in the Wall, a quieter site, produced two fledglings. This was the first actual record of any such breeding at the site.

This season, after the loss of one three-egg nest, a second nest has successfully produced two chicks now being reared in the face of the tourist onslaught.

These chicks would not have hatched if it was not for an emergency rescue effort with sandbags against two-metre-high tides undermining the edge of the beach berm that included the nest. It worked, and the chicks hatched days later.

On their second day, the chicks were hidden for protection, out of sight beneath the tree roots on the inside of the lagoon estuary.

The parents, with specific piping calls, wanted them across the other side and persisted until they ‘obeyed’.

The two tiny chicks cuddled for courage, then lurched into deeper water for a ten metre plus swim – not even two days of age. Having made the journey, they tucked up under mum for a deserved rest.

They now have reached the halfway mark in rearing along the sandy and reef shoreline where they can be fed lovely sandworms with juicy bivalves, alert to tourists, high tides and possible predators.

These are remarkable events at the very core of nature. They remind us that despite the huge and varied environmental challenges we face; the natural order exists. It is intriguing and dynamic, probably more than it has ever had to be – surviving in the climate crisis. These miracles of nature are on our doorstep and at risk.

The other shore - we're there

These are remarkable events at the very core of nature. They remind us that despite the huge and varied environmental challenges we face; the natural order exists. It is intriguing and dynamic, probably more than it has ever had to be – surviving in the climate crisis. These miracles of nature are on our doorstep and at risk.

The revealing back story to this POC pair is that the male POC has a yellow flag on its leg marked ‘YW’. It identifies that the bird was banded at Corner Inlet, right next to Wilsons Promontory in Victoria. The yellow flag is the most common of the flagged POCs.

When the chicks have successfully fledged, they will fly off with the parents, perhaps to Victoria until our next warm season.

The Federal Government Coalition parties have just announced that the Commonwealth Threatened Species Hub will be closed next June, and funding withdrawn, losing 150 environmental scientists and a single focus on threatened species.

13 comments on “The Little Things That Count”