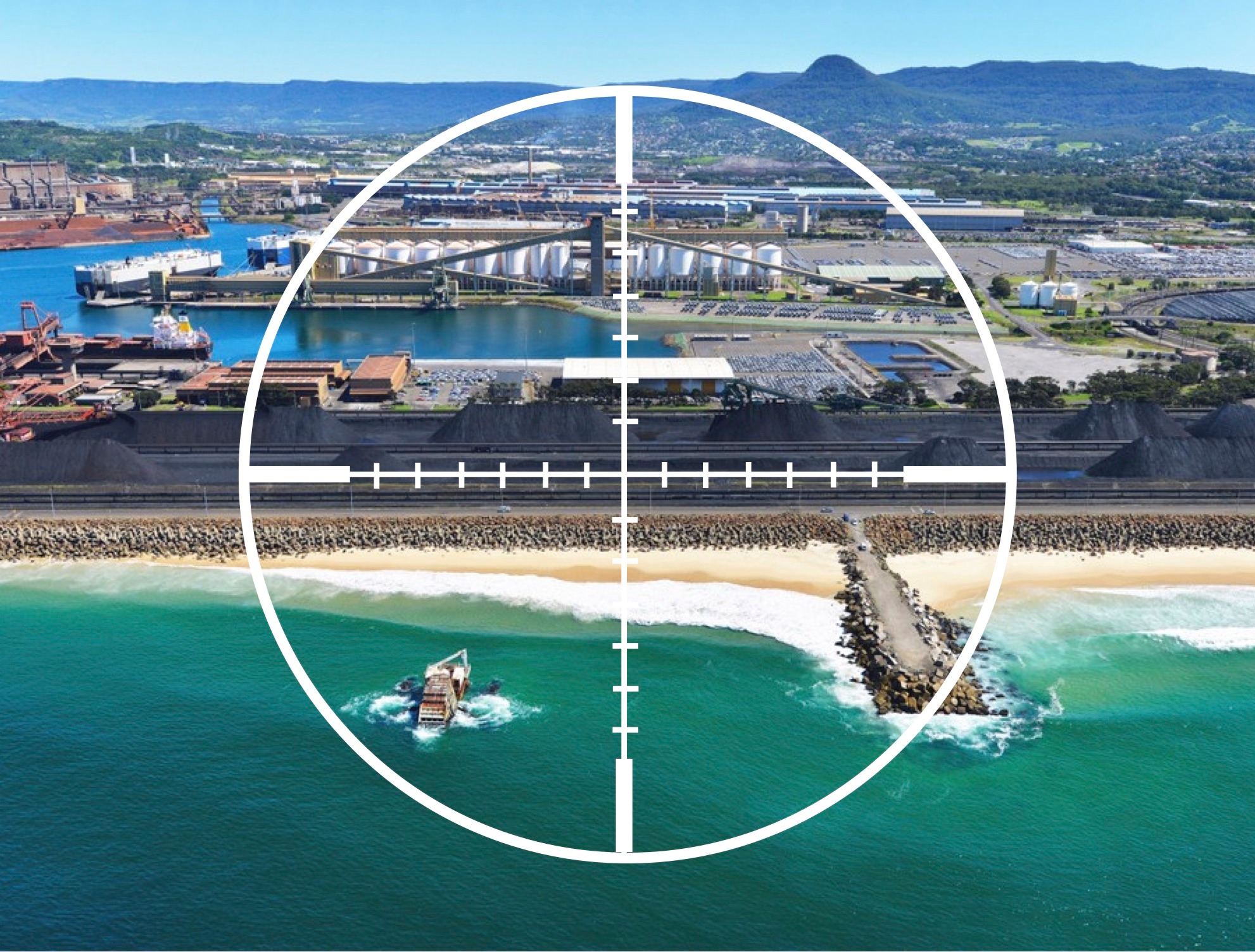 On Monday 7 March Prime Minister Scott Morrison announced in a speech at the Lowy Institute that his government had decided to establish a new submarine base on the east coast of Australia to support a future nuclear-powered submarine fleet.

In September last year plans to acquire new nuclear submarines were revealed as the cornerstone of a new security pact between Australia, the United Kingdom and the United States known as the AUKUS agreement. The new agreement has already prompted a major diplomatic stoush with France after Australia tore up its existing $90 billion contracts with the French firm Naval Group to replace Australia’s ageing Collins-class submarines.

When Morrison named Port Kembla as one of three locations being considered for the new submarine base, it prompted outrage in Wollongong. Local activists sprang into action and on Saturday 12 March the Wollongong Undergraduate Students’ Association (WUSA) called a rally in the Wollongong mall to oppose the plan. It was attended by a cross-section of the community and heard from WUSA Education Officer Sean McLachlan, Greens councillor Mithra Cox, Maritime Union of Australia Southern NSW Branch Secretary Mick Cross, South Coast Labour Council Secretary Arthur Rorris and me, an academic researcher on nuclear and peace issues and a Port Kembla resident.

Following the action, a group of local people formed Wollongong Against War and Nukes (WAWAN). The group kicked off its opposition to the nuclear submarine base plan with a large rally outside the Wollongong City Council chambers on Monday 4 April. On that day, the council was considering a motion put by Greens Councillor Mithra Cox to extend the city’s nuclear-free status.

Wollongong was first declared a nuclear-free city in 1980, during the height of the anti-nuclear weapons movement. Throughout the 1970s and 1980s the city hosted large Hiroshima Day demonstrations for peace and in opposition to nuclear weapons. In 2019 Wollongong City Council also signed up to the International Campaign for the Abolition of Nuclear Weapons Cities Appeal. By signing this Appeal, the council called on the Federal Government to sign and ratify the UN Treaty on the Prohibition of Nuclear Weapons, which entered into force in January 2021.

After some heated debate on the floor of the council chamber, Wollongong City Council reaffirmed its nuclear-free status. Of course, the nuclear-free declaration is largely symbolic and is concerned with nuclear weapons rather than with the nuclear submarine base proposed for Port Kembla.

In fact, nuclear waste material is already handled at Port Kembla when it is returned to Australia after reprocessing in the United Kingdom. A shipment was received the same day as protesters rallied in Wollongong mall on 12 March. The nuclear waste was accompanied by an extensive police operation and road closures from Saturday night into the early hours of Sunday morning as a container of nuclear waste was transported to Lucas Heights.

Nevertheless, the motion demonstrated a majority on Council are concerned about the continuing threat posed by nuclear weapons and are sympathetic to some of the protester’s concerns.

Australia, the 10th-biggest arms exporter in the world

The Morrison government is openly pursuing the goal of Australia becoming the 10th-biggest arms exporter in the world. Among the minority who opposed the motion was Liberal Councillor Elisha Aitken, who voted against the extension of the nuclear-free zone. She also foreshadowed a motion that was not put to the meeting, welcoming the nuclear submarine base proposal that included claims it could generate 7,000­­–8,000 jobs.

These unsubstantiated numbers were repeated by Debra Murphy of the Illawarra Regional Development Australia in an interview with ABC News. They demonstrate the interest of some business interests in developing a local arms industry.

On 11 March, just a few days after Morrison’s announcement about an east-coast submarine base, business figures met at the i3net industry breakfast: Defence to discuss the further development of a defence industry in the Wollongong area. However, only two local and state and federal politicians have voiced public support for the proposal.

According to the Illawarra Mercury, Wollongong-based Liberal Senator Concetta Fierravanti-Wells told the i3net breakfast that there had been “a lot of work behind the scenes, a lot of work to get it to this particular point”. Member for Kiama in the NSW lower house Gareth Ward also threw his support behind the project, issuing a press release “backing Port Kembla as the home of our nation’s new subs”. However, Fierravanti-Wells has since lost Liberal Party preselection for the Senate election and Gareth Ward has been suspended from the NSW parliament. It is unclear how other local politicians will react should Port Kembla be selected for the base.

Base opponents have voiced a variety of reasons for their position. South Coast Labour Council Secretary Arthur Rorris told the Illawarra Mercury that the community would “fight tooth and nail to prevent putting a nuclear target on our city”, highlighting the concern that basing a major military installation at Port Kembla would make the city more vulnerable in any future war.

Gem Romuld, Director of ICAN Australia, pointed to the risk of radioactive contamination in the event of an accident or military attack. The MUA’s Mick Cross told both rallies about the potential for a green industrial revolution in Port Kembla that would provide sustainable local jobs but would be put at risk if the port became a military base. He also noted the potential for restrictions on access to the port and surrounds which are currently popular locations for recreational boating, fishing and surfing should it become a military base.

In addition to the many specific concerns about the nuclear base and its siting in Port Kembla, the AUKUS pact and the military build-up on which it is promised poses a grave threat to peace in the Pacific.

Condensing his hard-won experiences in the socialist and anti-fascist struggles of the early twentieth century, George Orwell named the defence ministry 1984 the Ministry of Peace.

‘Securing peace’ through investment in war

Today, the Morrison government is embracing this rhetorical doublethink with its talk of ‘securing peace’ through investment in war. The result of the government’s actions, far from securing peace, has been to provoke existing allies like France and New Zealand. Our Pacific neighbour has confirmed that nuclear submarines would not be welcome in its waters under its nuclear-free zone policies.

The AUKUS agreement has also been widely condemned by Pacific leaders, who remember the devastating impact of nuclear testing on the people and ecosystems of many Pacific islands. Rather than engaging in creative dialogue and solidarity with our neighbours to build regional peace, the Australian government is taking the first steps on the dangerous path to war.

While politicians talk big about jobs and promise enormous investment in weapons in the name of protecting Australia from an imagined future threat, the real threat of catastrophic climate change is already here. On the South Coast, we have experienced severe bushfires, a global pandemic and now major flooding.

The Guardian reports that research from the Australian Strategic Policy Institute puts the potential cost, with inflation, of building eight new submarines at up to $171 billion. That is $171 billion dollars not being invested in building resilience to climate change or in green technologies to help us reduce our carbon emissions. It is $171 billion dollars not being invested in a health system that is cracking under the pressure of long-term underinvestment and two years of global pandemic.

Wollongong Against War and Nukes is holding a community forum: Nuclear submarine base for Port Kembla? at the Illawarra Aboriginal Cultural Centre and Keeping Place at 22 Kenny Street, Wollongong on Tuesday 26 April. Doors open at 6 pm for a 6:30 pm start. You can find all the details on Facebook.

The meeting will hear from former Australian Greens Senator Scott Ludlum and ICAN Australia Director Gem Romuld. All are welcome. For inquiries contact Alexander Brown on 0421 414 078.

Alexander Brown is an academic and researcher on nuclear and peace issues at the University of Wollongong, a member of local peace group Wollongong Against War and Nukes and a Port Kembla resident.