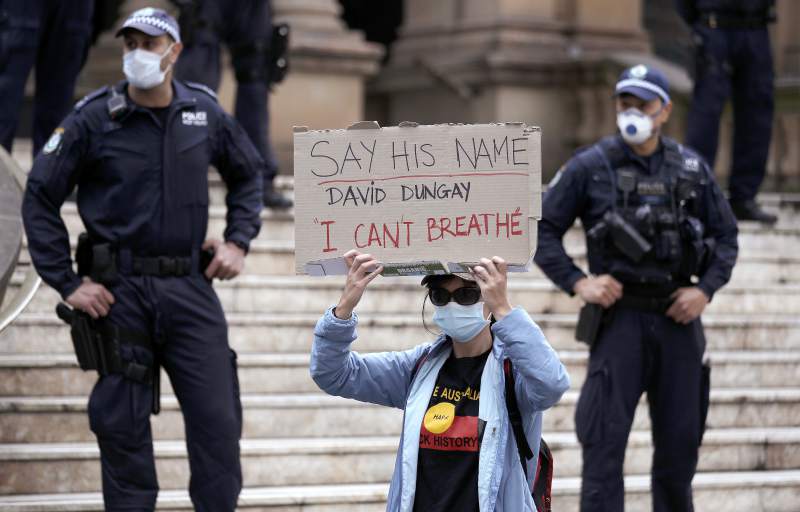 Letter to the editor by Brad Stanton

I write in response to local media reports that a motion will be put to Council regarding the global movement called Black Lives Matter.

I do not support Councillor Watsons proposed motion.

As Aboriginal Australians continue to fight for equality and close the health, education and wellness gap through the Black Lives Matter Australia movement, many are still facing inequality at the hands of the justice system.

The movement aims to seek justice for those who died in police custody and advocate to close the equality gap between Indigenous and Non-Indigenous Australians.

Tens of thousands have gathered in major cities across Australia demanding justice over minority deaths in police custody in solidarity with the Black Lives Matter movement.

It's about justice for those who have lost their lives or suffered like David Dungay, an Aboriginal man who died in a Sydney prison in 2015. His case has similarities with George Floyd's death at the hands of police in the US.

Like Floyd, Dungay's family say his last words were, "I can't breathe." Dungay, who was schizophrenic and diabetic, died in Long Bay Prison Hospital after he was overpowered and restrained by at least four prison officers.

David's family, like many others still cry out for justice.

The protests in Australia come after a 17-year-old indigenous boy was injured by a policeman in Sydney - the actions of the junior constable, who arrested and later freed the boy without charge, were dangerous and uncalled for.

They called for charges to be brought against the officer who violently kicked the boy's legs out from underneath him and pinned him to the ground with the help of two other officers. The officer has been placed on restricted duties while the case is reviewed by the NSW Police Standards Command.

There's not much difference between the US and Australia. It's the same institutionalized racism, it's the same black deaths in custody and police getting away with it with impunity.

Australia has a major problem with Institutional / systemic racism. It is a form of racism expressed in the practice of social and political institutions. It can lead to such issues as discrimination in criminal justice, employment, housing, health care, political power and education, among other issues.

When it comes to the Black Lives Matter protests, which have been beautiful to watch and peaceful for those who participated, Mr Watson, I'm not actually quite sure what you want to apologise on my behalf for. Not even the police have a problem and you certainly do not speak for me.

South Coast Police Commander Superintendent Greg Moore said he had been impressed by the positive behaviour of protestors.

"It's really been refreshing to see that that relationship with police and the protestors has been very positive and we haven't experienced that sort of pushback," Superintendent Moore said when relating to US Protests here in Australia.

That quote was taken from the same ABC article that reminded us that back when Mayor Councillor Greg Watson had involvement in a media stunt where an Aboriginal flag was burnt in Nowra, in 1983.

Even if it was 'just a rag' or 'media stunt gone wrong' as we are told every time this pops its ugly head from the history archives the fact that cant be denied is that day you deliberately went to destroy a piece of cloth which was said to be an Aboriginal Flag. We are even classed as bullies when we remind him.

Mr Watson after doing something so disgraceful I ask you, before you call people Bullies on the matter to walk a day in the shoes of Indigenous people - to be seen differently, to be looked at differently, be treated differently, to live a life of fear towards those you should trust and ask for protection from.

Bomaderry has historic closeness with the mistreatment of Indigenous people being classed as the birthplace of stolen generations.

"I believe it's (racist) a very easily thrown around word and I don't believe that the average Aussie, these days, has a racial bone in their body" - Greg Watson, also from ABC article.

The Australia Talks National Survey, fielded to a nationally representative sample of 54,000 Australians.

The Australian Human Rights Commission says it recorded more complaints under the Racial Discrimination Act since February than at any time over the previous 12 months.

The Executive Council of Australian Jewry has found a marked increase in the number of more serious incidents of anti-Semitism. In 2019, 40% of respondents to the Scanlon survey reported negative or very negative attitudes towards Muslims.

Far-right extremism is also on the rise, with ASIO warning small cells of people are meeting to salute Nazi flags.

Economic downturn has been linked to an increase in racial discrimination again and again. More precisely, it leads to scapegoating. Economic downturns precipitate scapegoating, because struggling people are looking specifically for someone, not just something, to blame. Often, that blame falls on ethnic minorities and immigrants.

I am in favour of not addressing issues that don't even exist, rather, looking at the system that has failed so many and address the root of problems rather than detract from them, and look forward to hearing how our Elders and Indigenous community have communicated with Mr Watson and had input into this motion of professional politics.

I hope this nonsense can be voted out next Council Election.

Featured, Letters to the Editor