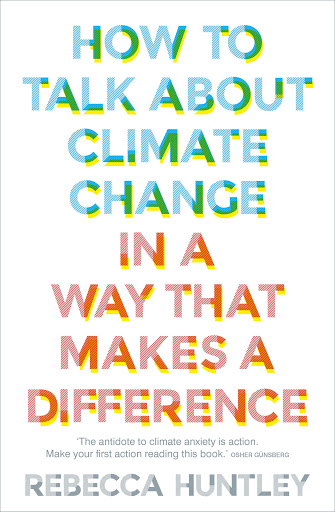 Book Review for: "How to talk about climate change in a a way that makes a difference" by Rebecca Huntley

I want a safe and just climate future for my children and the living world. But I am frustrated that Australian voters still choose political parties that support greenhouse gas emitting industries. This occurs in spite of the settled science of dangerous climate change, the evidence of extreme weather, and the myriad of solutions available.

Rebecca Huntley’s book suggests an explanation. It contains many helpful insights based on robust social research as to how to have effective everyday conversations about tackling the climate crisis with neighbours, work colleagues, family and friends.

Rebecca Huntley is a social researcher who has spent 15 years listening to Australians talk about climate change. She has concluded that attitudes to climate change are less formed by scientific understanding, but rather by world views, values and emotions. Her recent research[1] divides voters into six different cohorts based on a spectrum of attitudes to action on climate change, from the alarmed, through concerned, cautious, disengaged, doubtful and dismissive.

According to Huntley, being effective is using conversation to move people along this spectrum, especially from cautious and concerned to alarm. She is intrigued by what language we need to use to convince people who are concerned and cautious about climate change to become alarmed, to take action, and vote for elected representatives with strong policies for climate justice.

Huntley’s book uses insights from psychology, neuroscience, and sociology to show why the commonly used “information-deficit” model of communication is deeply flawed. This common approach simply seeks to educate people about climate science. In contrast, Huntley’s central proposition is that communication about climate change must take into account the human characteristics of emotion, imagination, and loyalty to tribe. To make a difference, we need to understand the range of emotions people react with when presented with the science of climate change.

Huntley often draws on Per Espen Stoknes’s book “... Toward a new psychology of climate action”, where she summarises his wise advice: “our conversation on climate change must be engaging and inspiring, and bolster feelings of community…[and] tap into positive human emotions like the love of beauty and pleasure“ (p 218) In other words avoid extreme language, avoid blame, steer clear of us/them language.

She has chapters on the full gamut of emotions: guilt, fear, anger, denial, despair, hope, loss and love. Huntley says fear can play a role in effective communication but only when mixed with hope, humour, and collective action. She warns that anger can lead to political polarisation under the metaphor of war between us and them, which leads us away from a consensus on the urgent need to act.

She calls for us to acknowledge and address the feeling of despair, but “It’s not somewhere you want to set up house” (p 173).

We need to find the optimal zone for acting between overwhelmed anxiety and disconnected apathy. Her conclusion is that invoking emotions like “pride empathy and compassion are more effective [than, e.g. fear], especially with people who are not already 100 per cent convinced on the need for action.” (p 130)

Regarding hope, Huntley warns that our “optimism bias” can lead to a type of wishful thinking that tech solutions will save us from a dangerous climate, distracting us from the main threat from burning fossil fuels. Instead, she advocates for “grounded hope” arising from collective action. The difference is collective action tackles the problem based on an ethical imperative, while false optimism assumes others will fix it and can slide into denialism.

Huntley defines love as “a deep and abiding affection ... and unshakeable commitment to a person place or thing.” (p 218) She then describes research showing that “objects of care” can connect the issue of climate to individuals’ experience, evoking strong emotions that lead to action. So, her advice is to listen for values and then connect those values to climate change.

A powerful example is how Lynsy Smithson-Stanley activated the Audubon Society to take climate change seriously through their love of the northern cardinal (the official bird of seven US states).

Her final chapter offers some excellent advice. Huntley lists a number of principles for talking about climate change that underlie the book, the most important being start with love; listen and understand to find mutual points of empathy and find your own climate story.

Finally, she points out the importance of voting to “send a message through the ballot box that climate change requires immediate and effective action from government”.

This book surprisingly does not mention the significant research by the Common Cause Foundation in the UK[2] demonstrating the effectiveness of using compassionate values to engage people’s emotions to drive action. This body of work complements Huntley’s approach by describing what types of “objects of desire” are most effective.

Disappointingly Huntley does not address communication in the domain of media and political discourse. The book mentions the importance of influencing those with power to change the course of Australia’s climate policy but fails to suggest ways to alter the dominant narratives of popular discourse. Her focus is on individuals. Perhaps her next book will extend the principles of effective conversations to climate campaign messaging.

Early in the book, Huntley identifies “loyalty to tribe” as a powerful factor influencing people’s attitude to climate change. Yet this is only mentioned in passing throughout the book.

It deserves its own chapter, where Huntley could address the dilemma that on the one hand a compelling narrative usually involves a villain, but on the other hand, a villain involves categorising someone as “them” as distinct from “us”, creating divisiveness. Does belonging to a tribe inherently depend on difference?

An example of this dilemma is the Greens narrative of big corporations as the villain putting “profit before people” which can result in alienating the business community from the tribe of climate activists.

This book is worth studying if you want to be a more effective communicator for a safe climate future. And her suggested reading and resources at the end is a treasure trove of more insights, advice, and inspiring stories.

Let’s have a go at using the excellent ABC series “Fight for Planet A” as a conversation starter with neighbours, friends, family, and work colleagues to try out Rebecca Huntley’s tips.

Stephen Young is a retired software developer and community mediator who lives in Thirroul. He volunteers with The Wilderness Society Illawarra and Wollongong Climate Action Network with a focus on persuading Wollongong council to reduce their greenhouse gas emissions.