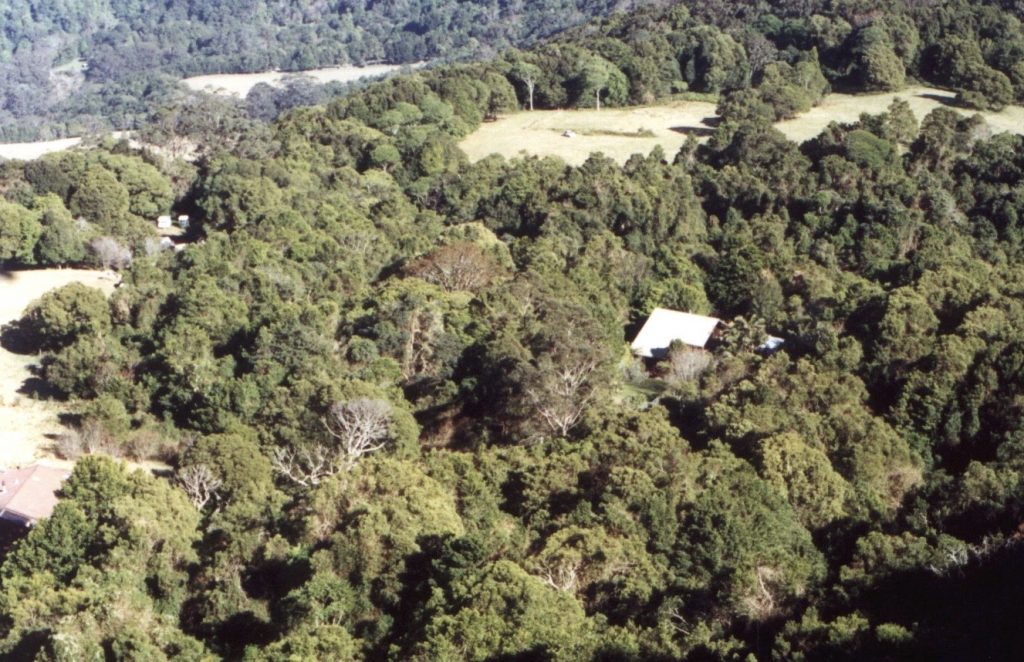 Can trees protect against fire?

I began to rake the leaves and remove the Bangalow fronds to a safer distance from the house in that fatal week earlier this year. I didn’t have a fire plan. I had encouraged the trees to grow up to the wooden cladding of my timber home, and there was only a narrow lane through the forest to the closest escape route, which required a hazardous two-kilometre drive to what I assumed was the safety of cleared paddocks.

Clearly, I was beginning to lose confidence in the capacity of the rainforest to resist fire and for my house to be safe. My certainty had been undermined by the knowledge that rainforest edges had burned in northern NSW at Lamington and Terania Creek earlier in the fire season. So, I began to question the reliability of the unusually dry rainforest around my home to resist the conflagration that was destroying forests and homes to my south?

There had been good reason for my confidence. Floyd, an authority on NSW rainforests, wrote that if rainforest burned it may initially be replaced by fire promoting species and future fire regimes would follow the newly established fire lines. He said rainforests needed up to 700 fire-free years to fully recover.

For this reason, I knew there had probably never been fire in the rainforest around my home. I also knew that most subtropical rainforest species were fire-resistant. The rainforest is normally damp and dense with little light penetration or air movement. It grows in places sheltered from the hot fire winds, unlike the open, often disturbed, dryer fire promoting eucalyptus forests.

When I returned days later, only one house had survived. I realised that a closely planted row of poplars on the fire approach side had shielded the house from the radiant fire wind and saved it. Like many rainforest species, the poplars lacked the volatile oils that ignite so easily, and their foliage had absorbed enough heat to protect the house.

After the dreadful south coast fire season had settled, I walked through the rainforest at my home with a new eye. Even though I have lived there for nearly 30 years, my newly fire alert brain saw it differently. The dryer ridges had a considerable amount of debris from the great Brown Barrel eucalypts and were clearly a fire risk, while the broader rainforest floor had no debris whatsoever.

For the first time, I realised that most rainforest species do not drop branches readily and consequently have few hollows for native animals. Those branches that do drop rot quickly due to the moist environment and lack of light and the plants on the forest floor are sparse and mainly ferns.

My rather naïve assumption that I would have been safe from fire had I reached the open paddocks at the end of my road was dashed when I visited the devastated fire areas of the south coast. I saw how fires had reached astonishing distances across open farmlands, villages and waterways with ease.

I heard one landowner state that the air was igniting with volatile eucalyptus gases well ahead of the fire front, and I wondered if uninterrupted open space assisted radiation and wind speed and could itself be hazardous under extreme conditions.

I reflected on how important fire barriers can be in protecting against fire, whether they be colour bond fences, rows of poplars or better still densely planted local rainforest trees. It seemed to me that tree removal isn’t always a fire mitigation solution.

I also mused on the prospect of indiscriminate fire hazard reduction in wet gullies, rainforest or regenerating rainforest areas, where fire suppressing moist forests could be inadvertently replaced by fire promoting ones.

Howard Jones is secretary of the Gerroa Environment Protection Society. His house is located on the slopes of Saddleback Mountain, Kiama. This rainforest was named the ‘Illawarra Brush’ by Dr Kevin Mills who described it as the largest area of subtropical rainforest remaining in South Eastern NSW.

6 comments on “Can trees protect against fire?”