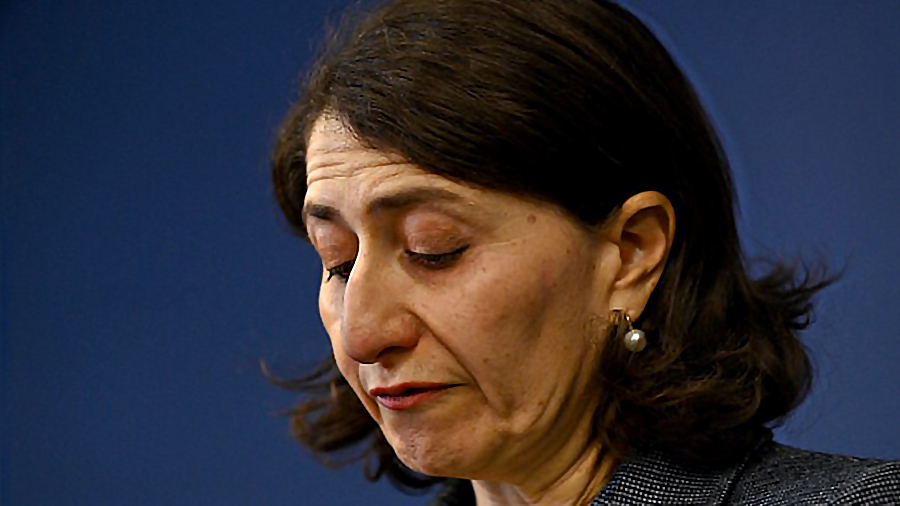 When my kids were little, I remember one occasion when the instruction not to eat anything before dinner was ignored by a small child who was caught red-handed with her hand in the biscuit barrel. On being confronted with the undeniable evidence, she stood her ground, biscuit in hand, while strongly protesting that she hadn’t done it.

In the witness box at ICAC this week Gladys Berejiklian has stuck to the lines she delivered at the time of her resignation. Over and over, we have heard her carping protests that she has done nothing wrong. It seemed that every piece of evidence that underscored her inability to separate her private actions from her public obligations elicited the response that she only ever put the good of the public first. All the while clutching the biscuit in her hand for everyone to see.

Perhaps Gladys Berejiklian does believe in herself, but for the rest of us, it was very difficult to hold the line as we heard phone intercepts of her putting Daryl Maguire’s interests to the fore. She would find him money for this or that project, she would ‘fix it’, she would tell Dom to fix it – Dominic Perrottet, that is, the new Premier, who, according to Gladys, always did what she told him to when he was the state’s treasurer.

As far as I’m concerned politicians’ private lives are not my business and it’s not the public’s business to interfere or judge in these matters – unless and until there are implications for ‘the public good.’ The former premier keeps assuring everyone that she has always put the public first. Except when she put Daryl Maguire first.

Listening to those painful phone recordings, it was difficult to avoid thinking that the egregious Daryl Maguire was bullying her. As Stephanie Dowrick wrote, “That a former treasurer and premier of Australia’s most populated state appears to have been influenced by a man like Maguire is partly (but only partly) a sad tale of a gullible, foolish woman manipulated by an untalented, bullying, demanding on-and-off partner/lover/boyfriend…There was not a single intercept re-played in the hearings where Maguire speaks to ‘Glad’ with her wellbeing in mind.”

No one likes a bully, and this has influenced some people to continue to feel sorry for ‘poor Glad’. She plays this pity card incessantly, but it is not relevant to the larger issue of her immature and hapless inability to understand the line that needs to be drawn between private and public behaviour. We must never feel sorry for someone who is prepared to mislead her colleagues and cause them to make decisions that have implications for the whole state under false pretences.

Political colleagues, including the former Liberal premier Mike Baird, told the ICAC that if they had known of her relationship with Maguire, this would have affected their assessment in certain matters. This criticism of colleagues spoke far louder than Berejiklian’s bleating about having done nothing wrong. Her clouded understanding of just how wrong she could be is sobering for anyone hoping for maturity in our leading politicians. To quote Dowrick again, “the emotional and moral maturity of our politicians has been on trial at ICAC.” And it has been found badly wanting.

She similarly misled her own staff. Berejiklian’s former Chief of Staff, Sarah Cruikshank, gave evidence claiming that she had been misled by her boss’s explanations of the extent and timing of the affair. Back in 2018, immediately following Daryl Maguire’s first exposure at ICAC, the Premier called Cruikshank to assure her that there was ‘nothing to see’ here and that her relationship was ‘historical’, in the past, prior to her becoming premier. The liaison continued for the next two years. The implications of this for the ability of Berejiklian’s staff to operate effectively are obvious, and the Commissioner did not mince her words when she said bluntly, “she lied to you”.

The public hearings concerning Maguire and Berejiklian took eleven days. Now proceedings move behind closed doors and the various lawyers on both sides argue the toss. According to the timetable set down by the ICAC, this process will formally end in mid-February and sometime thereafter, ICAC will deliver its findings. It may not bring down adverse findings, and predictably this will result in the usual outcry that poor Glad was put through the wringer unfairly, that ICAC’s powers should be curtailed and so on and blah blah.

Whether there are adverse findings or not the recent unedifying hearings have provided us all with an opportunity to learn some important political lessons as we have observed political immaturity and moral paucity on display. The behaviour of Maguire seems repellent and that of Berejiklian seems hapless and pathetic, but neither model serves society well.