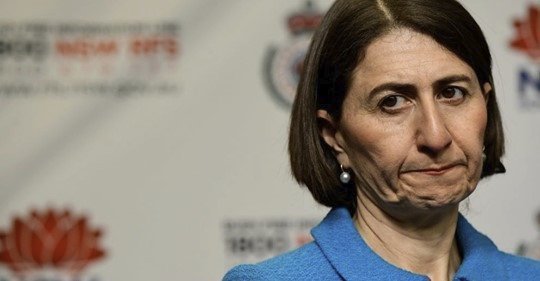 Gladys Berejiklian’s announcement of her resignation on Friday has been reported as a bombshell. This was not the bombshell. Back in August 2018 disgraced member of parliament, Daryl Maguire, had resigned from parliament following an ICAC investigation into his financial involvement in brokering major and minor dodgy land deals with the government.  Then in October 2020 ICAC heard of a long-running secret love affair between Maguire and Berejiklian that had commenced in 2015 and only ended weeks before this hearing.

From this moment it has been on the cards that we might arrive at what happened on Friday. In November 2020 the NSW Legislative Council voted to refer her to the ICAC over the relationship with Maguire and since then other actions taken by the Premier pointing to her knowledge of his corruption have surfaced. In March 2021 the ICAC announced that investigations into Maguire were ongoing and last Friday it announced investigations into the Premier for possible breach of public trust, conflict between her public duties and private interests and so on. The awarding of $5.5 m to the Australian Clay Target Association and to the Riverina Conservatorium of Music were mentioned.

‘I have done nothing wrong’ seems to be a mantra of Berejiklian, and in her resignation speech she claimed that she always acted with integrity. It is as though repeatedly saying these things will make them true. But it doesn’t work like that. The evidence so far does not point to there being nothing wrong, nor to integrity. Now we need to be careful here. ICAC has made no finding yet, but there are plenty of past misdemeanours lurking in the background that help fill out the picture.

Here I have a confession to make. For six years during the 2000s, I chaired the State Records Authority, commonly called State Archives. The role of this body is to preserve records created by state organisations and government departments, and to keep government bodies, including politicians, on the right side of the law in terms of how they keep their own records and how they pass them on to the Archives.

If you think this does not sound very riveting or sexy, you are not wrong. But look at it this way. These records are there for investigators of the future to track our past history and to tell our stories. And they are our records, paid for by our taxpayer money.

So, my antenna went up back in October 2018 when the usually low-key State Archives people accused the Premier’s office of breaking the law in relation to a fund of money to be allocated to local government authorities called the Stronger Communities Fund.

A parliamentary inquiry found that staff in the Premier’s office were guilty of shredding documents – briefing notes and advice relating to this fund, soon to be referred to in the press as a ‘slush fund’. It held $252 million and the chair of the enquiry, David Shoebridge MLC, said that more than 95 per cent of the grants made from it went to coalition electorates ahead of the 2019 state elections.

Several electorates were the recipients of grants that the local government authorities hadn’t even asked for and, surprise, surprise, one of the areas that got a big hand out was in the electorate where Daryl Maguire, Gladys Berejiklian’s secret lover, had recently been sacked.

The former Premier said in her resignation speech on Friday that ICAC had chosen an inconvenient time to inquire into her dealings with Maguire and her deception of parliament, and some reactionary commentators are calling for its powers to be curtailed. The fact that Berejiklian felt aggrieved at this is a clue into understanding how she views things. She said she had worked hard, and most people agree this is true. She says she has put the people of NSW first. Possibly. This is certainly what a lot of people think.

Facebook and Instagram are full of messages of love and support for this popular leader. And in relation to her blighted love life, she has played the ‘poor Glad’ card with great skill.  But sorry, this is not how it works.

And when she says “I’ve done nothing wrong”, this just highlights a very worrying trend in public life in this post-truth era we live in. Let’s get back to those shredded documents relating to hand- outs to coalition electorates. When she was accused of pork-barrelling, the Premier conceded this. “It is an accusation I will wear”, she said. “It’s not illegal practice. Unfortunately, it does happen from time to time in every government” [Anne Davies, Guardian, 26 November 2020.] Hand on heart “I have done nothing wrong.”

Sorry. Pork-barrelling isn’t OK, even if you are not the only one doing it. Concealing an intimate relationship that encouraged a conflict between her public office and her private interests isn’t OK.  What is OK is that NSW has an independent body to scrutinise corruption. The ICAC has its detractors and critics, but in the end it helps the people of NSW to know that wrongdoing can, at least sometimes, be taken into account.

This is not the case in federal politics. There are politicians in Canberra who have behaved as badly or worse than Berejiklian without facing the chop, that is also true.  And this eats away at any faith we might have in politicians. The failure of the Morrison government to establish a long promised independent corruption watchdog erode away at any semblance of honest government.

The Berejiklian pork-barrelling accusation over the Stronger Communities Fund resonates with the Federal ‘sports rorts’ saga but the relevant Federal minister, Bridget McKenzie, did not take the rap for it. Instead she got promoted in the ranks of the National Party. Not good enough.

Angus Taylor’s barefaced lies over a false document generated within his own office over travel expenses aimed at destabilising the Lord Mayor of Sydney went through to the keeper, with no police investigation, and just recently Angus’ mate, Scott Morrison, has promoted him too. Not good enough.  And it’s certainly not good enough for Christian Porter, who took a bag load of money from unknown sources to remain in parliament. Why is he still a thing?

NSW has a long history of shonky politics but it also has its ICAC. Thank God for that. Some will say that Gladys did less wrong than these Federal members. And some say that she did a good job as Premier. Some hold up placards saying they love her. There are less positive ways of assessing her reign. But whatever else may come out of this down the track, right now the fact of her resignation has shone a spotlight on the parlous state of things in Canberra.

Dr.  Shirley Fitzgerald is a historian and the proud holder of a Federation Medal for ‘services to History & Heritage’. Shirley is the President of the Huskisson Heritage Association, and part of the Save Husky Church campaign.