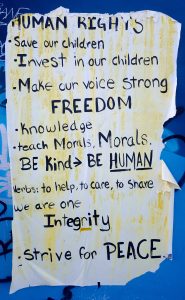 United States and Australia, so little in common?

Australia identifies with and supports US democracy, yet values and dominant modes of thought in America have produced a form of governance so dysfunctional that Australians should question their assumptions about the two countries’ similarities.

There is a belief that the US is powerful, superior and therefore a different country to all others. A culture of exceptionalism has encouraged ignorance, such that it is difficult for Americans to imagine a different society from the one they already have. The same trend prompted Socrates’ centuries-old warning that the unexamined life is not worth living.

A mode of thought that life’s purpose is to foster individual wealth, carries the demand that governments should facilitate this goal by not standing in the way. Under decades of US governments’ worship of free-market individualism, almost any endeavour called public has faced fierce opposition.

Senator Bernie Sanders crafted visions of a more equitable society built around principles of democratic socialism, but the stigmatising of any policy labelled left, let alone socialistic provoked opposition which insisted that collective endeavour was not the American way.

R H Tawney and J K Galbraith’s observations about private affluence co-existing with public squalor are confirmed by US disdain for policies to promote a common good, nationally and internationally.

Disdain for internationalism includes rejection of the International Criminal Court, of multilateral treaties, even of the universalism which should contribute to the protection of planet earth.

In US domestic and foreign policy, cruelty has become a taken for granted outcome. Rewards for the top 1% – the CEO of Walmart earns nine hundred times the wages of his average employee- contrast with widespread poverty which affects Afro-Americans disproportionately. They are more than twice as likely as white or Asian Americans to live in poverty.

In popular culture and in a conservative body politic, commitment to violence as a way to defend identity and to compete financially, operates like a strain of flu. The Marshall Research Fund based in Germany has reported that 74% of Americans think it acceptable to use force to obtain justice but only 34 % of European citizens thought this way.

Owning a gun and being able to defend individual freedom by shooting almost anything and anyone is a macabre feature of any society, but almost 50% of Americans grew up in households with guns and last year over 15,000 US citizens died from gun related violence. By March 2020, in response to fears that the Covid 19 epidemic would lead to civil unrest, gun sales increased threefold.

The massive US prison and security guard industry belies the claim that America is the land of the free. Less than 5% of the world’s population live in the US but 20% of the world’s incarcerated people are in US prisons. At any one time, over two million US citizens are behind bars.

Australia’s supposed bond with US democracy needs examination. Instead of a spirit of reciprocity to oil the wheels of decision making, a bitter partisanship ensures that US Federal government works only occasionally. In the last two years of the Obama Presidency, Republicans in control of both Houses ensured that the President could do little. His 2016 nomination to the Supreme Court was blocked because the Republicans did not approve his nominee’s legislative record on minimum wage increases.

The US government’s response to the murder of George Floyd is soured by hostility between Democrats and Republicans. Congress has passed a far-reaching Justice in Policing Act but the leader of the Republicans in the Senate Mitch McConnell said this act would not pass in that Chamber and President Trump says he will veto it.

The same determination to block legislation initiated by opponents is evident in US Federal politicians’ responses to the pandemic. The Democrats want to link relief for small businesses with wider assistance for hospitals. The Republicans seek only an increase in funds for carefully identified small businesses.

If a culture promotes individual wealth as a key criterion of success, even the language to discuss national objectives has militaristic connotations. Candidates running for office have to attract money from wealthy donors which is accumulated and counted in ‘war chests’. US corporations, and in response to fears of violence, many citizens, seem to prepare for life by being on a war footing.

In his prophetic book Dangerous Allies, former Prime Minister Malcolm Fraser warned that dependence on the US required compliance in an unequal relationship. He insisted that Australia and the US would be better friends by being able to disagree.

The United States and Australia can be allies, vibrant democracies, respectful of the rule of law and upholders of universal human rights, but claims about common values that bind the two societies derive from nostalgia about an effective, freedom loving US democracy that no longer exists.