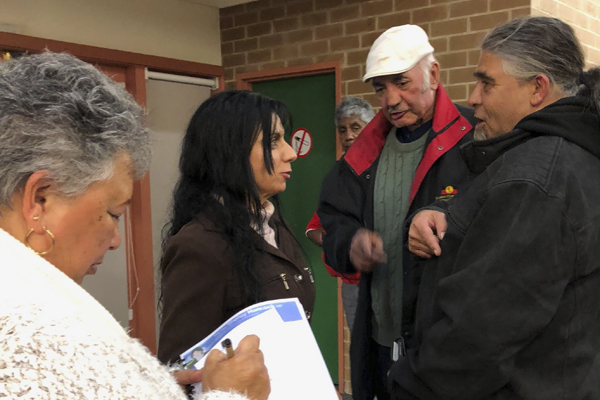 Sitting on committees at Council, Councillor Nina Cheyne became bothered that although there was Aboriginal representation, there was no real Aboriginal decisions or voices. They weren’t really being heard. There was engagement, but she questioned, if their ideas and viewpoints were being progressed, and if their vision was being taken into account for the future of the town.

A lot of planning and consultation went into preparing the motion for Council. The Aboriginal community needed to understand the process and what it meant to put the motion forward. There hadn’t always been good experiences for Aboriginals with Council in the past. There was also concern that the motion would be blocked, which is why it was important for there to be agreement and support to put it forward.

Over two community meetings and many more informal gatherings and discussions, words were shared, understanding gained, support given, signatures collected. Community groups, human rights groups, paid attention and showed their support – Amnesty, Shoalhaven Transition, Getup and The Greens. Hundreds of signatures ended up being collected. The gallery at the Chambers was packed and overflowing.

Councillor Cheyne delivered an emotional speech in putting the motion to Council.

“Some people say I am political in putting up this motion. I’m not. I make a stand for all human beings in this room to be treated fairly whether they are black, pink, purple, rainbow. I don’t care. Everyone deserves to have a voice in this community. That’s why I put this forward. Aboriginal people don’t have that in this community. We give tokenism here and there. We need to raise this up another notch and allow them the space to be who and what they are meant to be in this community. We need Aboriginal inclusion to move this city forward.

"Today I stand with my Aboriginal friends to plead that SCC accept the Uluru Statement from the Heart. It’s a statement of peace, of connection, of inclusion, of justice and reconciliation. Not too much to ask. It calls us to be mature, to own our past, to admit our wrongdoing and seek forgiveness, compassion, understanding and common ground for the greater good.”

The motion was ultimately defeated 7 votes to 5, with only the Greens Councillors and Annette Alldrick supporting the motion. The mood was one of shock and anger, with no one expecting that the motion would be voted down, especially as there really wasn’t a valid reason for doing so.

“I’m disappointed that my fellow Councillors didn’t support the community.” Amanda Findley said afterwards. “They clearly had their own agenda. They certainly acted like they didn’t understand the motion. The motion wasn’t calling for us to change the constitution. They tried every dirty trick in the book to try and not have that motion heard. The desperation of trying to find some formal process to hang the motion on.”

Councillor Patricia White thought, as a member of the Aboriginal Advisory Committee, that she would be invited to any community consultation. There were those that thought her whole argument resembled a child who hadn’t been invited to a birthday party.

The Aboriginal Advisory Committee has very specific Terms of Reference, and it is generally tied up with local issues. There are also a whole lot of local government acts that exclude involvement in political matters. The nature of its role actually makes the Committee irrelevant for the purposes of consultation.

Mayor Findley responded to the cries about community consultation with, “I hear the hypocrisy in that, just who was being consulted. Because we actually made the observation, that it wasn’t our consultation to have. It was a consultation to make sure that all of the Aboriginal people within our community were in agreement with councillors bringing this to our Council. Seeking our opportunity to give voice to the voiceless, to give power to the powerless. Whose opportunity for consultation was it, and why, when it’s not done to our needs, do we feel aggrieved at that?  We have no right.”

“Last night was about justice. It wasn’t political, it just makes common sense,” reflects Councillor Cheyne. “Let’s have our Aboriginal people included. They just want a Makarrata. They want peace with us, and a voice in the community where they can help get recognition”

I’m confident that we will get there. What last night did was bring a massive awareness to the Uluru Statement. The whole process brought a lot of Aboriginal people and human rights groups from across the Shoalhaven together.”

Public support for the Uluru Statement of the Heart is growing with 60.7% of the Australian population agreeing with its adoption. Malcolm Turnbull has previously rejected the idea of taking it to a Referendum.