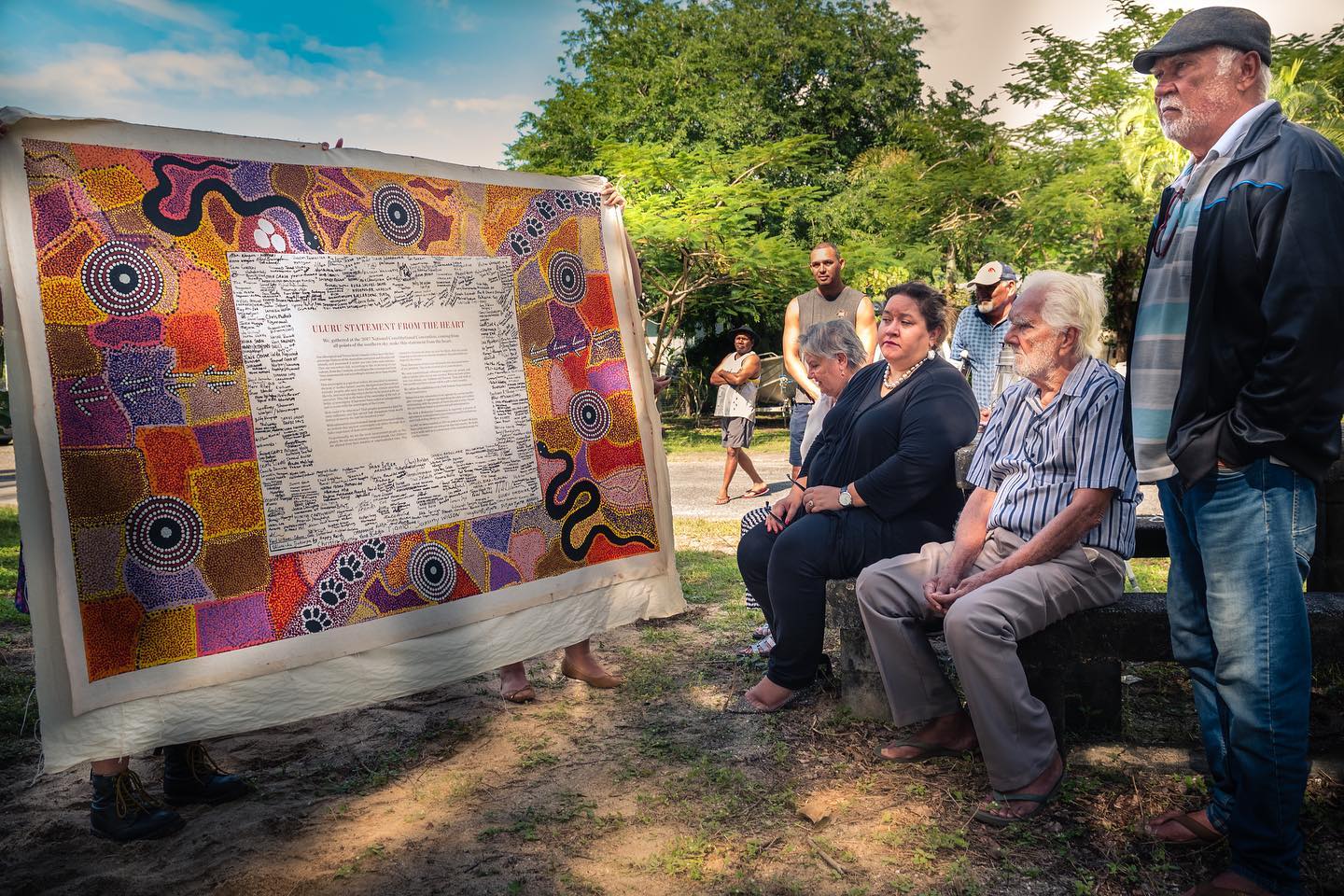 There is a huge contrast between the notion sovereignty depicted in the Uluru Statement from the Heart and political leaders’ perception of this concept as a weapon. Uluru’s message forecasts hope through reciprocity and healing. Politicians present sovereignty as a rampart to be defended, even as a justification for attack. Clothed in threats of violence, their noise about sovereignty can be deafening, but if redefined, sovereignty could promote non-violence and be music to our ears.

In their Makarrata prescription for people coming together after a struggle, the Uluru authors insist that an ancient sovereignty can shine as a fuller expression of Australia’s nationhood. The vision is humane, the language generous. Makarrata “captures our aspirations for a fair and truthful relationship with the people of Australia and a better future for our children based on justice and self-determination.”

Simultaneous with publicity about the Uluru statement, Russian, Chinese, US and Israeli leaders were repeating that sovereignty should be defended by military operations. By muttering the word, they could claim a moral justification for extending national borders, even for invading other countries.

Australians marshal similar arguments. When ABC’s Sarah Ferguson asked Defence Minister Richard Marles whether alliance with the US would mean giving up some of Australia’s sovereignty, the Minister answered, “No, but sovereignty is a really important question… having sovereignty really matters and submarines are a good example of that.”

Conventional appeals to sovereignty look like fraud. Nations’ supposed independence can be protected by finding and dominating enemies. States’ borders can be respected by threats to kill and destroy. By contrast, Uluru questions a view of sovereignty which is explained by reference to force of arms.

By rejecting uncritical reverence for a nation’s supposed independence, sovereignty can be redefined. It needs to be. Climate change catastrophes, world-wide pandemics, and threats to existence from the use of nuclear weapons, respect no borders. Conventional posturing about sovereignty is irrelevant.

We can draw unashamedly from poets. Over centuries, some have been warlike, but most, in their advocacy of non-violence and inclusiveness, have challenged dominant views of power. The Russian poet Yevgeny Yevtushenko described a “freedom of sovereignty where everyone has power and conscience is the only power.” The Australian Indigenous poet Jack Davis observed that his people had maintained dignity despite brutality.

That forgiving, inspiring artist, the late Archie Roach, sang, “They took the children away”, but when introducing that song, he said, “I don’t want to see my people destroyed anymore.” His sons judged their father “A healer and unifying force. His music brought people together.”

In his rejection of the idea that sovereignty requires swagger and domination, the pacifist American poet William Stafford sounded as though he would be damning the promoters of wars in Yemen, Ukraine, Ethiopia and Chinese warfare around Taiwan.

In her poem, ‘These Strangers in a Foreign World’, American poet Emily Dickinson advocated inclusiveness and respect for the vulnerable. She asked privileged people to imagine themselves powerless.

Sovereignty as a multi-dimensional expression of power- like a Mahler Symphony I once thought – highlights inclusiveness, embraces human rights and outlaws racism. In that vein, and in her poem ‘All One Race’, Indigenous poet Oodgeroo Nunucaal foreshadowed the spirit of Uluru:

In prose too, advocates of a common humanity have echoed these poets. In ‘Reimagining the Future’ (2000), Joe Camilleri argued that democratic governance could ensure greater equality in people’s access to knowledge and influence. In ‘Human Rights Horizons’ (2000), Richard Falk showed how humane governance depended on respect for human rights and on reverence for non-violence.

Each author painted an all-inclusive, cosmopolitan view of sovereignty, but instead of heeding their warnings, militaristic interpreters of sovereignty persist. Even language is murdered. Abusive power, arming every nation, calling destruction a means of defence, can somehow protect people by killing them, let alone by ending life on earth.

In Australia at least, the Uluru Statement from the Heart perceives sovereignty as a cue for inclusiveness, for non-violence, for friendship and for experiences of unity by people walking together. It offers exciting, life enhancing prospects and a new definition of sovereignty.