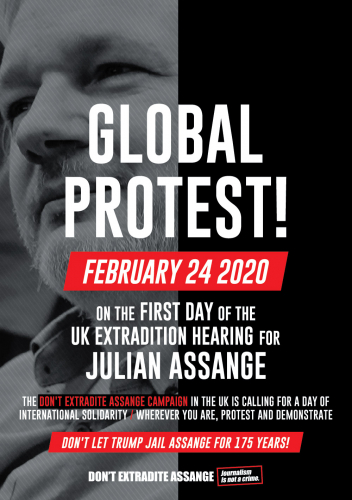 A Vigil for Julian Assagne

Join this PEACEFUL VIGIL to support award-winning Australian journalist Julian Assange as he begins his battle against the US government on Day 1 of his Extradition trial.

A global wave of events will roll out on Feb 24th in solidarity with Julian Assange, imprisoned without charge in a London maximum security gaol.

If extradited, the US wants to prosecute non-US citizen Assange for treason with 175 years in jail - effectively a death sentence.

Assange is being pursued by the US for exposing US war crimes in Iraq and Afghanistan.
Covering up a crime is a crime. Exposing one should not be!

Recent documents lodged by the the US government show that Assange will NOT receive a fair trial. Not only will he lose any right to First amendment protection but he will be placed under "Special Administrative Measures" which means he will face brutality and isolation in a maximum security unit- restricted to contact with only a handful of approved people who are then also gagged from any communication with the world. It has been described as the darkest corner of the US prison system - designed to cover up the torture from public scrutiny.

We demand that our Australian Government advocates NOW for Assange's immediate release from prison, and vigorously opposes the extradition request.

Last week the Independent Andrew Wilkie MP tabled a petition to the Australian Parliament. It had 270,000 signatures and was the 4th largest petition ever tabled. Wilkie warned
“If (Assange's extradition) goes ahead, not only would Mr Assange face 175 years in prison, but the PRECEDENT WOULD BE SET FOR ALL AUSTRALIANS, AND PARTICULARLY JOURNALISTS, that they be AT RISK OF BEING EXTRADITED to ANY COUNTRY they offend".

A link to the petition can be found at: http://chng.it/sM4nTkMR
YOU CAN STILL ADD YOUR SIGNATURE

Our gathering will take place 12-1pm at 59 Junction Street, Nowra (on the corner of Junction & Berry)
There will be:
Speakers
Music
Information
Opportunities for *Standing with Julian* Selfies
Lots of good people who care about truth & justice

Free posters and banners in pdf can be found on: http://somersetbean.com/free-assange/

If you can, please donate to the official Wikileaks defence fund: defend.wikileaks.org
Or to Wikileaks GoFundMe Public Defence Fund: https://www.gofundme.com/f/julian-assange-and-wikileaks-public-defence-fund

Please share this event and invite your friends and family to attend!