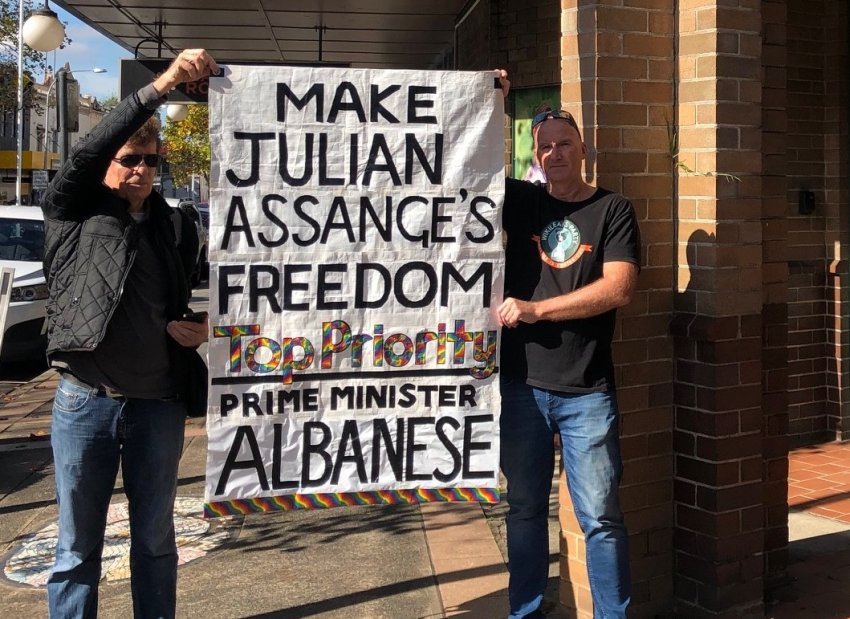 Across Australia, a hopeful Australian public are praising the Albanese government for showing a sense of justice in permitting the persecuted yet dignified Murugappan family to return to Biloela albeit only on bridging visas.

It is rumoured that deliberations are underway to end the mind-boggling prosecution of Bernard Collaery. If that’s the case, Prime Minister Albanese could achieve a moral trifecta by asking his British counterpart to cease the incarceration of Julian Assange and allow this worthy, significant Australian citizen to walk free. It’s time!

The grounds for intervening on Julian’s behalf are overwhelming. In an address to the Chifley Research Centre on December 7, 2019, opposition leader Albanese referred to Assange by insisting, “You don’t prosecute journalists for doing their job.” In post 2022 election comments, the newly minted Prime Minister set his sights, “We’re the party of social justice.” Concerning Assange’s years of imprisonment, the Labor leader said he could see no purpose in keeping Julian in jail. “Enough is Enough.”

Independent MP Andrew Wilkie, for years the nation’s conscience, challenged the Morrison government’s indifference to Julian Assange’s perilous situation. The MP described the continued punishment of Assange “an international farce”, an intolerable injustice imposed on someone for doing his job. Wilkie asked, “What will it take for the (Morrison) government to grow a backbone and finally act to protect this award-winning journalist?”

It is not difficult to defend this Australian citizen, whistle-blower, publisher, journalist. The US government wanted revenge for Wikileaks cables revealing American murder and mayhem in Iraq and Afghanistan and, more specifically, for Julian’s release of the collateral damage video which showed US marines in an Apache helicopter murdering eleven civilians in the streets of Baghdad.

Instead of transparency and adherence to rules of international law, the US government used a 1917 Espionage Act to concoct charges against Assange which could result in 175 years in a US prison. A massively expensive US UK collusion of class, cash, privilege, legal antics and imprisonment of Julian amounted to years of cruelty dressed up as law.

By contrast, eventual magnitude towards the Sri Lanka Murugappan family has injected a mental health booster across Australia, the sort of injection dubbed by teal independents ‘active hope.’ This hope floats in contrast to millions of Australian citizens previously perceiving government as wanting to appear strong by being cruel, treating kindness as weakness, somehow claiming mateship by abusing human rights.

A new politics is in the air. No future without generosity and forgiveness said Archbishop Tutu, and intervention to free Julian Assange could be a next step towards recovery of national self-respect.

The Prime Minister has assured John Shipton he will do what he can.

Anthony Albanese, please phone Boris Johnson and ask for Julian Assange’s extradition to the US be cancelled and his freedom guaranteed.

Prime Minister, the Murugappan family could have been released from detention years ago, but you have now acted. Thank you. The prosecution of Collaery could have been cancelled years ago. That decision could be imminent? Successful intervention on behalf of Julian Assange, could be a politically principled third decision, a new government’s trifecta.

The nation needs and welcomes the ‘active hope’ which would be nurtured by another moral, morale booster.

4 comments on “‘It’s Time.’ Albanese Has Opportunity to Intervene to Free Julian Assange”