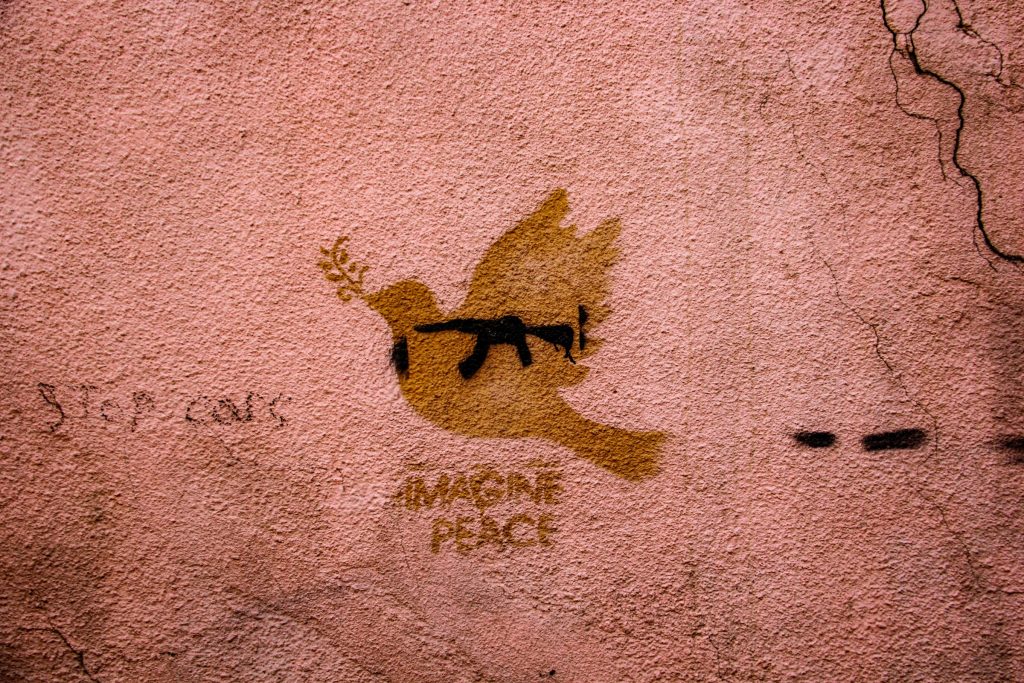 Make peace not war, the language of military strategists

Politicians, defence strategists and media enthusiasts for the armed forces will use words from the Defence Strategic Update proposal to spend $270 billion on weapons for the military. Via the language of non-violence, it is also valuable to convey other ways of thinking.

Well publicised proposals about security neglect ideas about peace, yet the language of peace-making displays life enhancing alternatives to armament proposals which are offered as incontestable, obviously in a nation’s best interests.

Words which pepper the Defence proposals have been accompanied by chest beating and boasting that mine may not be as big as yours but with a bit more stretching of the military budget, it could be. For centuries, macho swagger wrapped in the language of violence has produced wars and related disasters.

In response to the situation which the Prime Minister sees as an existential threat comparable to the rise of Fascism in the 1930s, it should be instructive to consider how language about security affects Australians’ self- image, imagination and visions of the future.

If fear can be generated, as in references to Australia being alone in a dangerous region, increased budgets for the military can be taken for granted. In reply to the question whether Australia could afford this $270 expenditure, Peter Jennings, executive director of the Australian Strategic Policy Institute, said ‘We can’t afford not to.’

Expressed in the context of supposed grey zones, threats and counter threats, the navy will benefit by receiving fifty seven new vessels including the attack class submarine project, also referred to as twelve ‘regionally superior submarines.’ The navy will also receive rifles, pistols, grenade launchers and mortars. $100 million will be spent on an AGM 158C Long Range Anti-Ship Missile.

Australia’s desire to become an advanced weapons manufacturer and to increase its budget for the purchase of military equipment, suggests that military planners are infected by the world-wide arms trade pandemic. Everyone is in danger and must be ready to be attacked or defended, hence a global increase in the fascination with weapons.

Contrasts in funding for war preparations as opposed to peace making look obscene. The UN Office for Disarmament Affairs and the Stockholm Peace Research Institute record that two years ago US $1.7 trillion spent on arms and armies amounted to eighty times, 80/1 the amount needed for global humanitarian aid.

In tone and content, the language of peace making is different. The 1948 preamble to the UN Charter, which grew out of the ashes of the Second World War, refers to practising peace by living together as good neighbours. In 1978 the UN General Assembly passed a Declaration that every human being has a right to live in peace, and in 1984 recognised that without peace, every other right is illusory.

The connotation of the words dialogue and disarmament suggest opportunities for youth to avoid the folly of adults who have supported the idea that a foreign policy objective is to be ahead in an arms race, or to avoid falling behind.

Peace education from nursery school to university would encourage conversations about peace. In dialogue with their Chinese peers, Australian youth who speak mandarin could be curious, innovative and disarming. In a future Defence White Paper, a proposal for such dialogue would be a refreshing innovation.

Advocacy of the case for disarmament as the means of survival and thereby freedom from fear, came from the Australians who initiated the International Campaign Against Nuclear weapons (ICAN), who received the 2017 Nobel Peace Prize. They had drawn attention to the catastrophic consequences of any use of nuclear weapons and had campaigned for the Treaty on the Prohibition of Nuclear Weapons.

Australia could cast off its usual subservience to the US and display a sudden spurt of courage by signing that treaty.

Language to describe the UN’s Millennium Development goals could also affect political deliberations and citizens’ conversations. Those goals are reminders that peace with justice includes respect for universal human rights, for the language and practice of non-violence and for humane governance to protect global environmental and related human interests.

Central to the ideals of humane governance is a reconsideration that living in a democracy means trust in alliances to challenge abusive power. It means support for the UN’s peace keeping activities, and thereby a view of sovereignty so much more cosmopolitan than the current noise about nationalism.

This capriccio about the language of peace ends with a couple of high notes from significant peace campaigners. They are worth remembering and could inspire.

The Indian philosopher and poet Rabinandrath Tagore advocated ‘One identity of the universe, a proud harmony of all races.’

The great mathematician, philosopher, creator of the campaign for nuclear disarmament (CND) Bertrand Russell, said that three passions governed his life, ‘The longing for love, the search for knowledge and unbearable pity for the suffering of mankind.’ He also said, ‘Wars don’t decide who’s right. They only decide who’s left.’

3 comments on “Make peace not war, the language of military strategists”