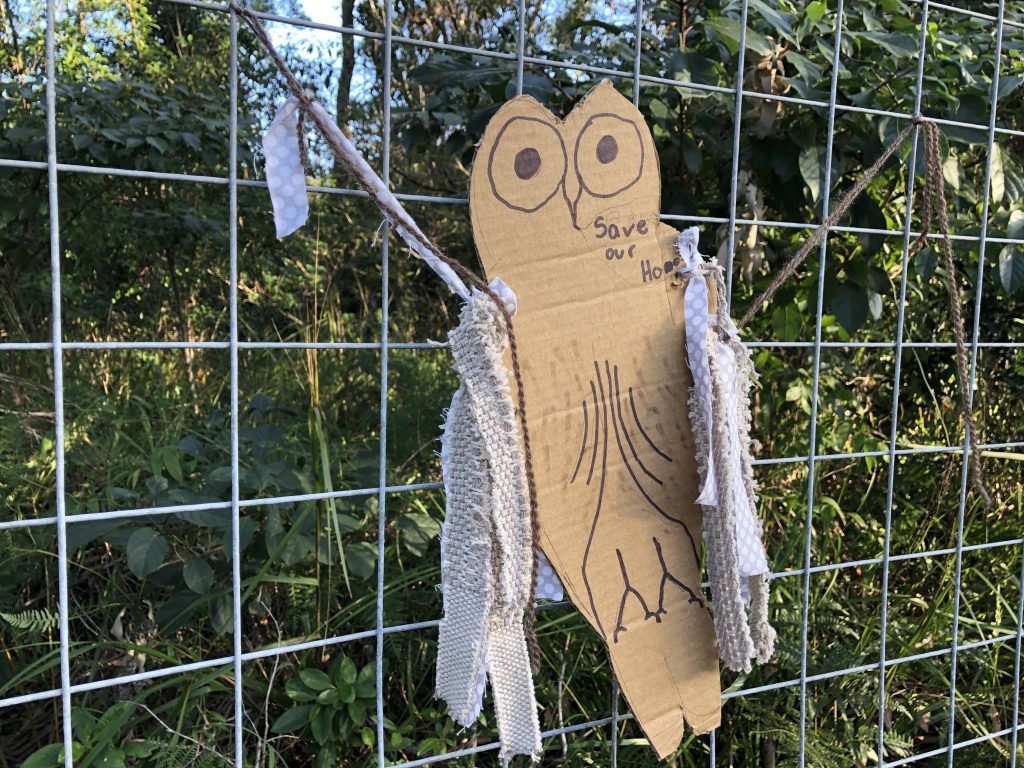 Manyana, a grieving community strikes back with art.

Occupy the Fence, an outdoor interactive art exhibition with a difference.

Since the fences went up around the Manyana Beach Estate site late in May this year the mood in Manyana changed. The bulldozers were about to move in, and the stress was constant. Injunctions, negotiations and legal process has kept the machinery at bay, but that two-metre--high wire fence and the physical separation it creates, remains a constant reminder. It represents the worst-case scenario; and it makes everything a lot harder to bear.

Now the forest is locked away. As if it is already taken. Gone.

Worse still in the past week a wallaby and its joey were separated by the fence, the mother eventually dying from head wounds sustained attempting to reunite with her baby.

The post-fence mood of the community changed in two ways. The fight got stronger, the determination greater, the will to win, the driving force. It united the community further and got a lot more people involved. At the same time a weariness, a ghastly tiredness, a quiet dark uneasy squelching depression started to bubble up. It is quite disheartening work fighting for what’s right, what’s just.

No one remembers exactly how it started but one day a painting appeared on the wire fence, then some children made some bats and owls and stuck them on the fence too. More and more artworks of animals came; and as quick as they appeared, they were blown away, destroyed by rain, perhaps some even taken.

The artworks got resident Lara Merrett, an artist herself, thinking. With strong links to the Sydney art community, she called in the troops to lend a hand and help raise awareness. The art community, to their credit, took the request on board with over 30 artists committing their time and creativity to the Occupy the Fence exhibition which is being held this Saturday at the Manyana Beach Estate development site.

Merrett hopes the event will put a national spotlight on the community’s campaign to save the precious bushland and raise awareness for not just the Manyana bush but all areas under threat across the country post-bushfires. Precious wildlife corridors must be protected against development with so many animals and forests decimated across the country last summer.

“It’s not just about Manyana it’s much broader,” said Merrett. “It’s about fighting for the small habitats and biodiversity that is left after the fires. I think everyone understood that. It was a call to action really.”

“We hope by doing this we can focus the government’s attention on its duty to protect the fragile biodiversity of our country post-bushfires. This call to action is something that artists can do in a very tangible way. They are change-makers and communicators and now is the time that we can come together as a community. This is about the future of our country,” she added.

Manyana has a lot to lose. Following the catastrophic fires of last summer, huge tracts of the forests on the eastern seaboard of Australia were burnt beyond recognition. More than a billion native animals were killed. With almost 90% of the Shoalhaven’s National Park land burnt by the Currowan mega fire, this unburnt section of forest in Manyana is so precious it was listed by the National Trust as requiring conservation protection and named by them the Manyana Landscape Conservation Area.

Volunteers from the Rural Fire Service in Manyana had fought valiantly to save this mature forest which has become a refuge for animals that survived, some of which have been recently listed for urgent management intervention following the fires. This includes species such as the Glossy Black Cockatoo, Gang-Gang Cockatoo and Mainland Dusky Antechinus which have been sighted on or near the area recently.

The Ozy Homes development approval was issued 12 years ago in a very different landscape to that present today. It would be ludicrous to destroy this sanctuary now to make way for a housing subdivision. Manyana has been left traumatised by the recent ‘Black Summer’ fires with both the people and wildlife dependent on this area of unburnt habitat to begin to restore what was.

Community efforts such as this extraordinary art exhibition provide both advocacy and therapy. Over the course of the weekend, artists will be producing artwork to ‘occupy the fence’ and reclaim it on behalf of the community. Artists will be working solo and collaboratively with members of the community to produce works that reflect that the power, beauty and ecological significance of the forest on the site set to be cleared.

Jorj Lowrey, from the Manyana Matters group said residents were honoured and thrilled to have so many amazing and generous artists support their campaign.

“Their involvement will bring wider attention to the very important issue of saving Australia’s precious habitats, like this site in Manyana, which are so vital for the preservation of our threatened wildlife and the recovery of ecosystems devastated by last summer’s bushfires. I can’t wait to see what’s created on the weekend.”

Essentially a fun family-oriented day where people can work alongside artists, or simply watch the creative advocacy unfold. Many artists will paint banners which depict the dilemma at hand, however a few are collaborating on creating a sculpture installation aptly titled ‘Real Estate’. Artists Janet Laurence, Jenny Turpin, Caroline Rothwell will be building cardboard structures that will sit on the fence to represent the habitat at risk of destruction for human housing to be build. They are inviting people to make local plants and animals out of cardboard to inhabit the structures.

Occupy the Fence takes place this Saturday 11th July, 10am to 4pm along Berringer Road Manyana.

Manyana Matters Environmental Association (MEAA) Inc and New Bush Telegraph acknowledge that the prospect of this land being cleared is having a profound impact on the mental health of people within our community and beyond. We encourage those experiencing distress to reach out to Beyond Blue on 1300 22 46 36 or LifeLine on 13 11 14 for support.