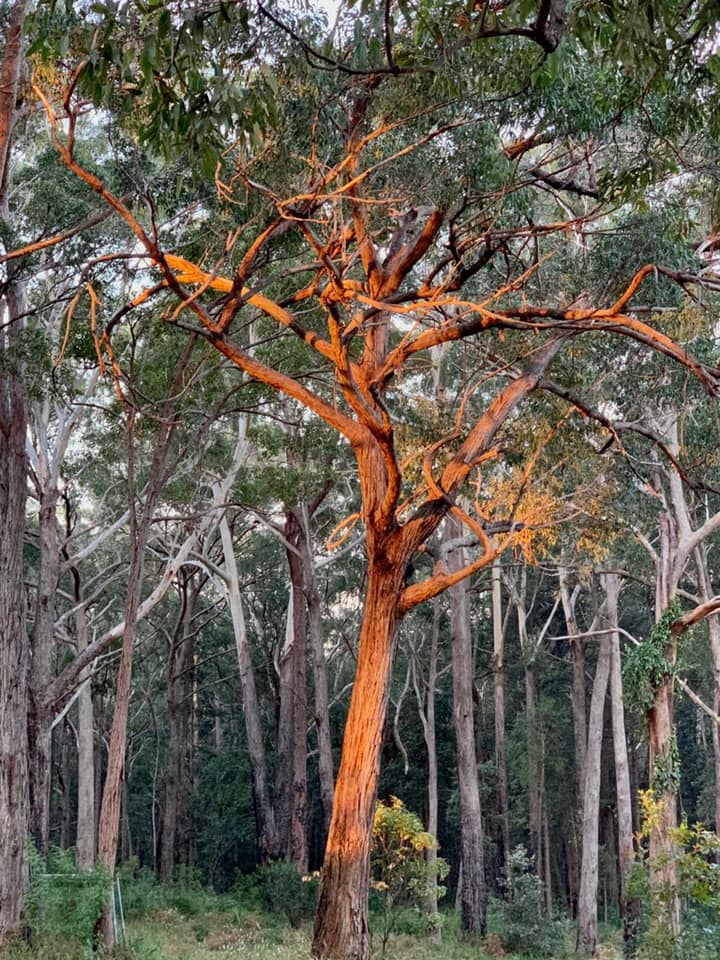 The little group of five villages surrounded by Conjola National Park and bordered to the south by Lake Conjola has seen its share of battles in recent years. Notably the protest and blockade of what was slated to be a mega-tip at Bendalong which would have taken most of Sydney’s waste and dumped it into pristine rainforest gullies alive with wildlife.

I remember taking the then state member John Hatton into the forest, standing above a beautiful fern-filled gully alive with the sound of birdsong and flowing water. I showed John on the map that this place was to be filled with waste. I traced the water course to a pristine lagoon by the ocean. He shook his head and looked at me in disbelief.

Pointing to the map again, I showed him our location and he visibly paled. Yes, I thought, he understands. And, to his credit, he did. That fight that the locals took up against the forces on Council, that would have had these rainforests destroyed and the mega-tip approved, resulted in Conjola National Park being gazetted by then Labor Premier Bob Carr. That long fight, fought by a small community led by Peter Hudson, became historic on many levels.

The second notable battle was for our existence during the fires of 2019/2020. The community pulled together to fight the forces of nature and look after each other and what was left of our wildlife. It is a time that has left many scars on the community, both physical and emotional.

The 2019/2020 mega-fires were one of the largest environmental disasters in recent world history with upwards of three billion animals killed or displaced. Previous large environmental disasters such as the Exon Valdez and Deep-water Horizon oil spills pale in comparison. This is the context out of which the community came together in such a powerful way. The unburnt forest at Manyana supports a large variety of plants and animals. These species were all heavily impacted by the fires and it is likely that in some cases extinctions will occur. The forest and the surrounding unburnt areas are a Noah’s Ark of species amidst a landscape that has been wiped of life.

The community has gained support for the preservation of the forest from many organisations and people across the political spectrum, such as State Planning Minister Rob Stokes, State Environment Minister and Treasurer Matt Kean, Federal Labor Member for Gilmore Fiona Phillips, the Independent Member of the State Legislative Council Justin Field, Greens Member of the Legislative Council David Shoebridge, the NSW Greens Party, Liberal Member for South Coast Shelley Hancock, the Foundation for National Parks, the local and state Labor Party, Mayor Amanda Findley and the other Labor and Greens councillors.

The recommendations and support of some of the most learned and important scientists and ecologists in Australia include Professor Christopher Dickman and Professor David Lindenmayer. A 120,000 signature Change.org petition, media personalities, actors, film stars and film makers, artists and musicians and the support of hundreds if not thousands of environmentally minded individuals and organisations locally, nationally, and across the world who watched our country and ecosystems annihilated, all understand the importance of preserving these unburnt habitats.

Despite this incredible knowledge and support for the community, the seven Shoalhaven councillors with allegiances to Watson’s ‘Independents’, holding a majority on Council, have consistently worked against calls to protect and conserve this land. Their tactics have been to vilify the local community. The question must be asked of them, against the context of the Black Summer Fires, species extinction and environmental collapse, why is destroying this important unburnt habitat and ecosystem more important than saving it?

The Shoalhaven is a special place that has no doubt inspired people for a verylong period of time. To be amongst nature surrounded by the myriad sights, smells and sounds of life, it’s a place where our senses become awakened. These are the places where the awareness of our connection with all living things becomes apparent and so it reminds us to remember who we are, where we come from. The forest is not only a biological source it’s a source of imagination, inspiration and relationship. It is a powerful place.

The residents here and the visitors who have fallen in love with the beauty of the Bendalong/Manyana area have stood up to battle the mobs that would destroy it. The ocean is still clean here and our air is clean. Our kids play on the streets and footpaths here and around the Shoalhaven. It’s still a great place to visit and to live and raise a family. But there will always be those that would destroy those things that we love about being here. Manyana and surrounding villages are only one of many communities in the Shoalhaven fighting to save biodiversity and their environment for future generations.

These places are a wonderland for adventure and inspiration creating business and bringing jobs into our communities. They are vital things that need protecting for the future and so we need new thinking to fix our environmental problems not the old thoughts of bulldoze, woodchip and develop.

With billions of animals killed, ecosystems and habitat destroyed, the fires were, and are still, a catastrophic and existential event that deeply affected all of us. It is nearly two years since and people from all over the south coast and other areas are still confused, hurting and feeling overwhelmed. The fires have forced on us the image of a world without birds, flowers, trees or animals. It is a grief-ridden vision but it informs us that we can no longer take these things for granted. We have to fight for their survival.

People from all over the world are recognising that if we are to look after our planet and the life-forms on it, then the old ways of doing things must change. The type of thinking that accepts extinction as a cost of doing business, that accepts habitat destruction without consideration or value for our environment and heritage can never be acceptable.

For Greg Watson and his cohorts in the Shoalhaven Independents party, it’s business as usual yet they betray a fundamental part of what makes us Australian, our environment. It is a betrayal of vision, inspiration and imagination, but worse it is a betrayal of our children's future and the generations to come.

For myself it’s time for renewal and change. It’s time for this group of (not so) ‘Independents’ to be relegated to history’s dustbin.

Now that Council elections are upon us, votes that will safeguard our environment against those that would destroy it matter more than ever. By protecting and preserving biodiversity and keeping our environments healthy we are sending our legacy generationally forward. Manyana really does matter and so does your vote.

2 comments on “Manyana Really Does Matter”